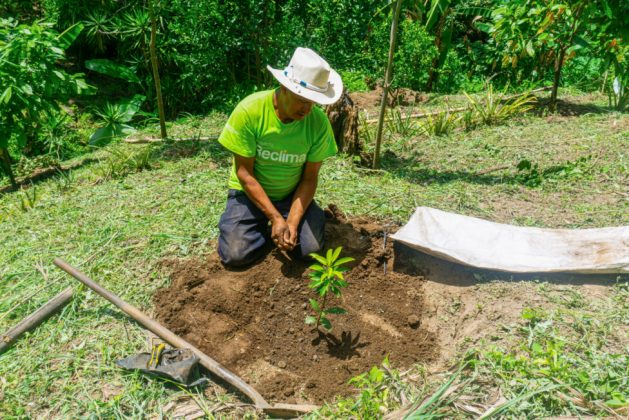 Farmer Luis Edgardo Pérez kneels next to a loquat (Eriobotrya japonica) seedling which he just planted using one of the climate-resilient techniques he has learned to retain rainwater and prevent it from being wasted as runoff on his steep terrain in the Hacienda Vieja canton in central El Salvador. CREDIT: Gabriela Carranza/IPS

SAN PEDRO NONUALCO, El Salvador , Aug 1 2022 (IPS) - With the satisfaction of knowing he was doing something good for himself and the planet, Salvadoran farmer Luis Edgardo Pérez set out to plant a fruit tree on the steepest part of his plot, applying climate change adaptation techniques to retain water.

This is vital for Pérez because of the steep slope of his land, where rainwater used to be wasted as runoff, as it ran downhill and his crops did not thrive.

Before planting the loquat (Eriobotrya japonica) tree, Pérez had previously cut part of the slope to create a small flat circular space to plant it.

This technique is called “individual terraces” and seeks to retain rainwater at the foot of the tree. He has done the same thing with the new citrus trees planted on his small farm.

He learned this technique since he joined a national effort, promoted by the Food and Agriculture Organization (FAO), to make farmers resilient to the impacts of climate change.

“In three years this loquat tree will be giving me fruit,” the 50-year-old farmer from the Hacienda Vieja canton in the municipality of San Pedro Nonualco, in the central Salvadoran department of La Paz, told IPS, smiling and perspiring as he stood next to the newly planted tree.

San Pedro Nonualco is one of 114 Salvadoran municipalities located in the so-called Central American Dry Corridor, a strip of land that covers 35 percent of Central America and is home to more than 10.5 million people, whose food security is threatened by inconsistent rainfall cycles that make farming difficult.

The Reclima Project is the name of the program implemented by FAO and financed with 35.8 million dollars from the Green Climate Fund (GCF), which supports climate change mitigation and adaptation in the developing South. The Salvadoran government has also contributed 91.8 million dollars in kind.

The program was launched in August 2019 and in its first phase led to the installation of 639 Field Schools to promote agroecology practices in which 22,732 families are participating in 46 municipalities in the Salvadoran Dry Corridor.

In addition, 352 drip irrigation systems will be installed, and 320 home rainwater harvesting systems have begun to be set up in 12 municipalities in El Salvador.

By the end of the program, it will have reached all 114 municipalities in the Dry Corridor, benefiting some 50,000 families. 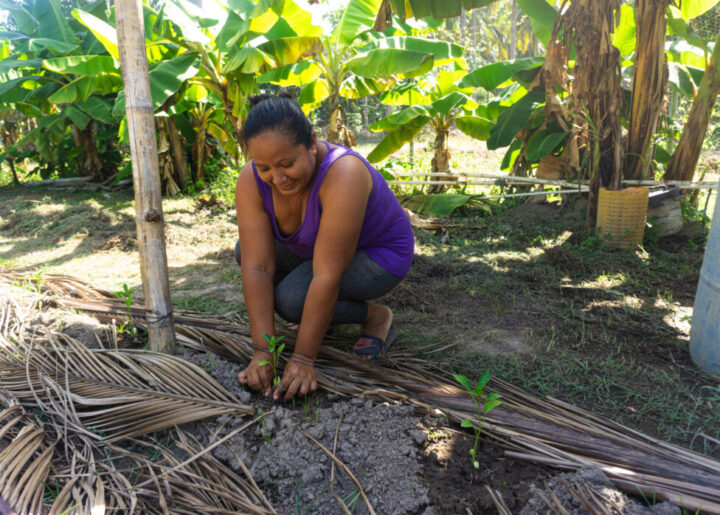 Patricia Argueta, 40, plants a green bell pepper (Capsicum annuum) seedling in the community garden of Hoja de Sal, in the municipality of Santiago Nonualco in central El Salvador. She is one of the farmers learning new agroecological techniques as part of a project aimed at helping them combat the impacts of climate change. CREDIT: Gabriela Carranza/IPS

Pérez is one of the 639 farmers who, because of their enthusiasm and dedication, have become community promoters of these climate-resilient agricultural practices learned from technicians of the governmental National Center for Agricultural and Forestry Technology.

He meets with them periodically to learn new techniques, and he is responsible for teaching what he learns to a group of 31 other farmers in the Hacienda Vieja canton.

“You’re always learning in this process, you never stop learning. And you have to put it into practice, with other people,” he said.

On his 5.3-hectare plot, he was losing a good part of his citrus crop because the rainwater ran right off the sloping terrain.

“I was losing a lot of my crop, up to 15,000 oranges in one harvest; because of the lack of water, the oranges were falling off the trees,” he said.

On his property he has also followed other methods of rainwater and moisture retention, including living barriers and the conservation of stubble, i.e. leaves, branches and other organic material that cover the soil and help it retain moisture.

Pérez’s citrus production is around 50,000 oranges per harvest, plus some 5,000 lemons. He also grows corn and beans, using a technique that combines these crops with timber and fruit trees. That is why he planted loquat trees.

“I love what I do, I identify with my crops. I like doing it, I’m passionate about it,” he said. 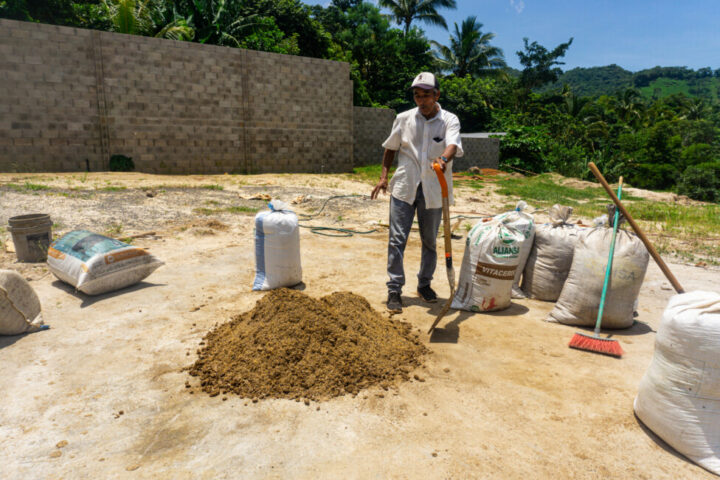 Ruperto Hernández, 72, finishes preparing the organic fertilizer known as bokashi, which he and other families benefiting from a program promoted by FAO in El Salvador use to fertilize their crops in the San Sebastián Arriba canton of the municipality of Santiago Nonualco in central El Salvador. CREDIT: Gabriela Carranza/IPS

About five kilometers further south down the road, you reach the San Sebastián Arriba canton, in the municipality of Santiago Nonualco, also in the department of La Paz.

Under the harsh midday sun, a group of men and women were planting cucumbers and fertilizing with bokashi, the organic fertilizer that the farmers have learned to produce for use on their crops as part of the FAO program.

“We are tilling the soil really well, we put in a little bit of organic fertilizer, mix it with the soil we tilled and then we put in the cucumber seed,” 72-year-old farmer Ruperto Hernández told IPS.

To make the fertilizer, Hernández explained that they used products such as rice hulls, molasses, charcoal, soil, and chicken and cattle manure.

“The more ingredients the better,” he said.

Hernández also showed the water conservation techniques used on the farm. These included shallow irrigation ditches dug along the hillsides at a specific angle.

The seven-hectare plot is a kind of agroecological school, where they put into practice the knowledge they have learned and then the farmers apply the techniques on their own plots.

Among the women in the group was Leticia Valles, who has been working with a towel over her head to protect herself from the sun.

Valles said this was the first time she was going to try using bokashi to fertilize her milpa – a term that refers to a traditional farming technique that combines staple crops like corn and beans with others, like squash.

“We have always used commercial fertilizer, but now we’re going to try bokashi, and I’m pretty excited, I expect a good harvest,” she said during a break.

They and the other participants in the program have also been taught to produce ecological herbicides and fungicides, which not only benefit the land but also their pocketbooks, as they are cheaper than commercial ones. 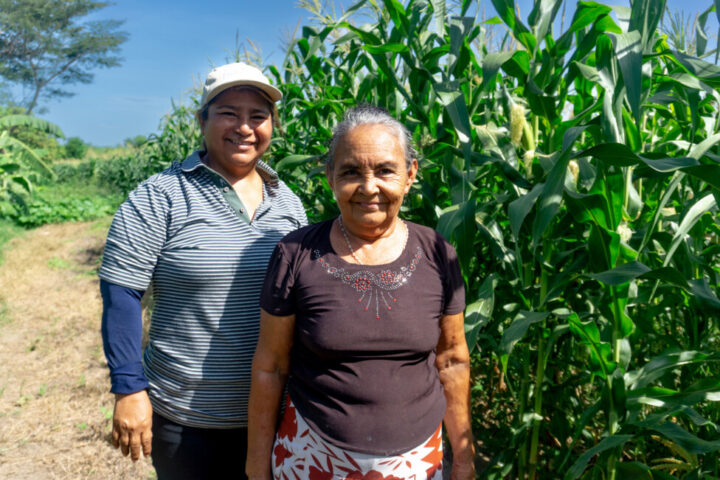 Imelda Platero, 54, and Paula Torres, 69, stand in a cornfield in the canton of Hoja de Sal in central El Salvador. They are two of the most active women involved in promoting actions to adapt agriculture to climate change in their village in the Dry Corridor. CREDIT: Gabriela Carranza/IPS

Further south, near the Pacific Ocean, is the village of Hoja de Sal, also in the municipality of Santiago Nonualco, which is taking part in the Reclima Project as well.

The effort in this village is led by Imelda Platero, who coordinates a group of 37 people to whom she teaches climate-resilient practices on the plots of the Hoja de Sal cooperative, created in 1980 as part of the agrarian reform program implemented in El Salvador.

A total of 159 cooperative members collectively farm more than 700 hectares of land, most of which are dedicated to sugarcane production. And the members are entitled to just under one hectare of land to grow grains and vegetables individually.

But she not only teaches them how to plant using agroecological methods to combat the impacts of climate change.

She also teaches the 27 women in the group to become aware of the role they play and to empower them, as part of the program’s focus on gender questions.

“I was outraged when I heard stories about one member putting a padlock on the granary so his wife couldn’t sell corn if he wasn’t there; that is called economic violence,” said Platero, 54.

And she added: “We have been working on this issue, it is a challenge. It is still hard, but the women are more empowered, now they grow their corn and they sell it how they want to.”

Another important aspect is to respect the cosmovision and ancestral knowledge of peasant farmers in the area.

For example, Paula doesn’t plant if she can’t see what phase the moon is in,” said Platero, referring to Paula Torres, a 69-year-old farmer who is one of the most enthusiastic participants in the initiative.

Torres and her husband Felipe de Jesús Mejía, with whom she has raised 15 sons and daughters, are two weeks away from harvesting the first ears of corn from a bright green cornfield that is glowing with life. She is sure that this is due to the organic fertilizer they used.

She added that now that she has seen how well the techniques work, she will use them “till I die.” Last year she and her husband produced about 1,133 kilos of corn, and this year they expect to grow more, by the looks of it.

“It’s never too late to learn,” she said, as she bent down and cut zucchini (Cucurbita pepo), which she sells in the community, in addition to cooking them at home.