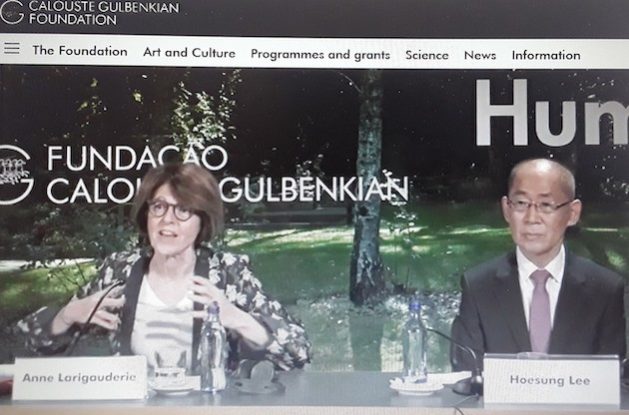 Anne Larigauderie, the Executive Secretary of IPBES, with Hoesung Lee, President of the IPCC. IPBES and the IPCC were joint winners of the Gulbenkian Prize for Humanity 2022, which was dedicated to climate change. Credit: Joyce Chimbi/IPS

Nairobi, Oct 13 2022 (IPS) - IPBES’ assessment report on the Sustainable Use of Wild Species, released in July 2022, painted a troubling picture of the ongoing global biodiversity crisis that could paralyse economies and endanger food security and livelihoods.

Earlier in February 2022, the Intergovernmental Panel on Climate Change (IPCC) painted a similarly troubling picture: a warning that every tenth of a degree of additional warming could escalate threats to people, species, and ecosystems.

For their contribution to climate change adaptation and resilience building, IPBES and IPCC today (October 13, 2022) emerged winners of the Gulbenkian Prize for Humanity 2022, which was dedicated to climate change.

“The decision to award the 2022 Gulbenkian Prize for Humanity to both IPBES and the IPCC is a powerful statement confirming that the global loss of species, destruction of ecosystems, and degradation of nature’s contributions to people together represent a crisis not only of similar magnitude to that of climate change, but one which must be addressed with at least similar urgency,” said Anne Larigauderie, the Executive Secretary of IPBES who accepted the prize alongside Hoesung Lee, President of the IPCC.

“The unified message from both of our expert communities is that either we tackle and solve the biodiversity crisis and the climate crisis together – or we will fail on both fronts.”

Additionally, Lee emphasised that science was “our most powerful instrument to tackle climate change, a clear and imminent threat to our wellbeing and livelihoods, the wellbeing of our planet and all of its species. For IPCC scientists, this prize is an important recognition and encouragement. For the decision-makers, it is another push for more decisive climate action.”

IPBES is an independent, intergovernmental body set up in 2012 with the objective of improving the interface between scientific knowledge and political decision-makers on questions around biodiversity, the protection of ecosystems, human wellbeing, and sustainability.

IPCC, the Nobel Peace Prize winner in 2007, in conjunction with Al Gore, is a United Nations-affiliated organisation that fosters the production of scientific knowledge within the scope of evaluating the climate impacts of human actions and supporting governments with regard to their decision-making and the implementation of measures able to combat climate change.

Merkel attended the prizegiving, as did António Feijó, President of the Calouste Gulbenkian Foundation that introduced the Gulbenkian Prize for Humanity in 2020.

The focus on climate change, Feijó explained, was a very simple decision: “Climate change and all which this philanthropic organisation does, they represent an existential condition for humanity.”

Merkel reiterated the importance of focusing on climate change acknowledging the controversies that often surround decisions made and the many policies on the table for the potential way ahead.

“Science is the most important link. Scientific evidence cannot be removed from the equation. We may have our own political views, but I believe we must make the right decision in order to ensure the survival of humanity,” Merkel observed.

On biodiversity, Larigauderie spoke of the 2019 Global Assessment Report on Biodiversity and Ecosystem Services, which alerted the world that a million species, out of an overall eight million, of plants and animals, now face extinction – many within decades.

This degradation of nature, she said, is affecting the capacity of ecosystems to deliver on a number of key functions central to human survival, including the capacity to mitigate against climate change and to achieve food security.

The jury, comprised of leading figures in global climate and environment research and action, highlighted how this prize recognises the role of science on the front line of tackling climate change and the loss of biodiversity.

Finding that “evidence-based science has been fundamental not only to advancing many of the political and public actions but also the need to attribute the ‘nature of urgency’ to the ways in which the political agenda approaches the question of combatting the climate crisis”.

In this regard, Larigauderie and Lee expressed their gratitude to thousands of scientists and indigenous and local knowledge holders for volunteering their time and expertise to deliver robust research on climate change and biodiversity.

“Our reports are the most authoritative, may I say, the scientific voice of the United Nations about climate change. They provide the world’s leaders and decision-makers at all levels with a sound and most scrutinised scientific knowledge about our climate system, climate change and how to tackle it,” Lee observed.

“The Prize comes at a critical time for climate change science. IPCC reports are clear and unequivocal. Climate change is man-made, widespread, rapid and intensifying. Today, we are not on track to limit global warming to 1.5 degrees Celsius.”

Against this backdrop, the Jury stressed that IPBES and IPCC stood out in highlighting the relationship between “science, climate, biodiversity and society, representing the best that is done in this field all around the world.”

The Jury, therefore, recognised how the two organisations serve to emphasise “the need to look at the climate crisis and biodiversity in conjunction, with concerted approaches making recourse to nature-based solutions.”

With an annual cash award of €1 million, the Gulbenkian Prize for Humanity recognise people, groups of people or organisations from across the globe that make outstanding, innovative, and impactful contributions to mitigate and adapt to climate change.

This is the third edition of the Gulbenkian Prize for Humanity. It was awarded for the first time in 2020 to the young Swedish activist Greta Thunberg. In 2021 the Prize was awarded to the Covenant of Mayors for Climate and Energy, the largest global alliance for climate leadership in cities, comprising more than 10,600 cities and local governments from 140 countries, including Portugal.