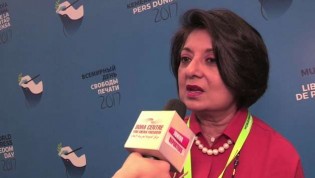 By The Doha Centre
The Doha Centre spoke to Farhana Haque Rahman, Director General of IPS about media development and defending press freedom, at the World Press Freedom Day Conference in Jakarta, Indonesia.

By Dr. Hanif Hassan Ali Al Qassim
This year’s theme for the 2017 World Press Freedom Day “Critical Minds for Critical Times: Media’s role in advancing peaceful, just and inclusive societies” is one of the most important days honouring press freedom.

By Thalif Deen
The widespread belief in the politically-motivated killings of journalists in Sri Lanka is predicated on a deadly irony: the hidden hand has always been visible, but the fingerprints have gone missing.

‘Fake News’ is not Journalism…

By Irina Bokova
Would you trust your news from any source? How are we able to ensure that ‘fake’(d) news does not overtake the flow of information?

By Shafik Mandhai
Taha avoids giving his last name to journalists, but not out fear of the Sudanese government, whose harassment he fled in 2015.

By IPS World Desk
Journalists are not only major users of the cherished right to freedom of expression but also symbols of the extent to which a society tolerates and promotes freedom of expression. The current state of safety of journalists worldwide is alarming. Over the last decade 827 journalists and media workers have been killed. Even more alarming is the fact that in less than one out of ten cases have the perpetrators been apprehended.

By Justus Wanzala
As the clock ticks down to Kenya’s general elections slated for Aug. 8, a move by the Kenya Communication Authority (CAK) to make journalists adhere to guidelines on election coverage has elicited fear that the government could be trying to control how they report on the polls.
ADVERTISEMENT ADVERTISEMENT