POLITICS-MOZAMBIQUE: The Modern Face of Renamo

MAPUTO, Nov 11 2008 (IPS) - If Maria Moreno is elected president of the Municipal Council in Cuamba, in Niassa Province, Mozambique's parliament will lose one of its most interesting personalities. 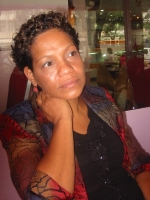 A thin woman with short-cropped hair, Moreno, represents the modern face of Renamo, once considered "the absolute opposite of virtue and democracy," according to Mozambican sociologist Carlos Serra, "and which today seeks to steer the ship of democracy."

After independence from Portugal in 1975, Mozambique was sucked into the regional struggle against apartheid. White-ruled Rhodesia and South Africa financed a rebel group – Renamo. Civil war followed, in which one million people died, 1.7 million became refugees, and three million were internally displaced.

Sixteen years have passed since the war ended in 1992 and Mozambique has enjoyed successive fairly clean and peaceful elections.

Moreno is part of a new generation of Mozambican politicians. Three times married, with two sons from her first husband, Moreno speaks fluent English and French, and graduated from a secretarial course in Switzerland in 1981.

She is the new image of a Renamo that is more educated, and more participatory.

Colleagues like Moreno because she works hard and has a sense of humour. Journalists seek her out because she answers their questions without mincing her words. And it doesn't hurt that, in these times of political showbiz, she is telegenic. Unusually among women politicians, Moreno does not wear traditional dress in rallies or TV.

As a teenager during the 1960s, her inspiration was American radical leader Angela Davis.

"Her hair, her struggle for human rights, being jailed for it. She is the individual that has made the greatest impression on me," says Moreno.

Women's issues are one of Moreno's passions. "Even though the literacy rate has greatly increased in rural areas, it is predominantly men who can read. Wives continue to be assigned to a subordinate position", she says.

Subordination is a reality in politics as well: "Women still don't have real decision-making power. Too often they remain hostage to their parties and forget their own agenda."

Cuamba is where her heart is

This is Moreno's second bid to head the council in Cuamba, the town where she lived as a teenager. In 2003, she campaigned across the municipality by car, bicycle and on foot.

"It was a beautiful campaign. People were surprised to see me, they were not used to seeing a candidate up-close," she recalled.

The memories of connecting with people are sweet, but bitter defeat was the result.

"I think I lost due to excessive confidence in the visible support I received. We didn't foresee the dirty games our political adversary was playing… We sinned by being naïve and in politics, that is a mortal sin," she told IPS.

Moreno is confident of victory this time, building on political experience and visibility acquired in Parliament since 2004.

Two draft laws carry Moreno's stamp, one against the abuse of political power and another on airtime regulation on public television and radio. And she pushed for the newly approved law against domestic violence. "It's not a party issue, it affects all Mozambican women," she said.

"In parliament we rubberstamp the laws made by government. The political dialogue is too focused on the bigger issues and too theoretical," she told IPS.

Cuamba is where Moreno wants to make a difference. The town (pop. 95, 000) is Niassa's economic capital, hub for the railway that channels produce to the Indian Ocean port of Nacala. Yet in spite of its agricultural and tourism potential, Niassa, tucked between the Rovuma River and Lake Malawi, remains one of the poorest of Mozambique's ten provinces.

With an area of 129,000 square kilometres, Niassa has only 170 km of paved roads, poor sanitation and drinking water, and few schools. Half of its roughly one million people live in poverty.

"There is a municipal library but it's empty, with no books: only walls, chairs and tables. There is no cinema. With little exposure to culture and to news and having so much disposable energy, the youth drink a lot," says Moreno.

Cuamba is the extreme periphery in all aspects, but the transition from bustling capital to provincial backwater appeals to her: "The world is made up of villages, that's why I think that local power is very important to change the world."

Moreno's father, a businessman, embraced Renamo from its first hour. "Myself, I resisted affiliating to Renamo. At the time I didn't agree with the armed option. I thought that dialogue was possible. But I was also aware that different ways of thinking were suppressed," she recalls.

Niassa was known as "Tropical Siberia", after the re-education camps set up by the Marxist one-party state, led by the Front for the Liberation of Mozambique (Frelimo).

"The image of men and women piled up in trucks coming from Maputo going to the Niassa re-education camps has stayed with me. Was that the country that we Mozambicans fought for?" says Moreno.

In Moreno's view, her party has put its violent past behind and become a democratic player: "Renamo liberated the country from its single-party regime, from dictatorship, so that one day it can be democratic in the full meaning of the word."