THAILAND: For Transgenders, Identity Papers Are No Simple Matter

BANGKOK, Jul 12 2010 (IPS) - In New Zealand, where Sujinrat Prachathai enjoys resident status, she is a woman able to append ‘Mrs’ to her name to signify that she is married. Here in Thailand, however, she has to be addressed as ‘Mr’ since she is still considered male even though she underwent a sex-change operation years ago. 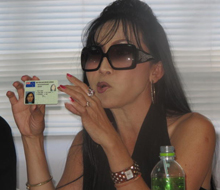 Sarah holds up her New Zealand ID card, which recognises her a woman. Credit: Sutthida Malikaew/IPS

Predominantly Buddhist Thailand is generally tolerant of homosexuals and transgenders, some of whom have risen to prominence in the entertainment industry. For so-called ‘ladyboys’ or males who live as and look like women, there is also a term, ‘katoey’.

But like many transgenders in Thailand, Sarah – also known locally as Jim Sarah from her acting days – would like to be able to formally identify herself ‘Miss’ or ‘Ms’, if not ‘Mrs’ – which is still not possible here under the law.

But even as moves to change this law have barely begun, a debate has already broken out within the transgender community over whether something else must be added to ‘Ms’ to distinguish transgenders from those who were biologically born women. Some say this is the best way to define their gender and is the pragmatic approach, but others say their identities should be in the same category as those who were biologically born female.

Sarah is among those who want the distinction to be clear. According to her, it is not only a matter of ensuring respect for the person or making sure that someone interested in having a relationship with a transgender knows her background. Sarah says it is also practical, especially during medical emergencies, when knowing a patient’s gender could speed up the diagnostic process.

“I was once admitted to hospital while I was unconscious,” recounts Sarah, who heads the Unreal Women Do Not Fake Group. “My ID said I’m a man with the title ‘Mr’ but I looked like a woman. I woke up with four people standing around me doing nothing. I asked, ‘Why didn’t you do anything? I nearly died!’ And the doctor said, ‘Are you a man? I came to treat a man but you are a woman.’”

Sarah says being able to call herself ‘Miss’ or ‘Ms’ would be ideal since it would cut through people’s confusion over a female-looking ‘Mr’. But she feels it would have been equally disastrous had the doctor mistaken her for a woman since there are some things transsexual surgery cannot change.

There are transgenders who beg to disagree – quite vigorously – with this view.

Nok Yollada, who was crowned ‘Miss Alcazar’ in the 2006 edition of that gay pageant, has organised a group called ‘Transsexual Female Association’ to fight for the right of transgenders who have become women to be treated like those who were born women. The group wants not only for transgenders to be able to call themselves ‘Ms’, but also to have their birth certificates changed to say they are female.

Nok argues that people like her may have been born biologically male, but are actually female from the start. She cites herself as an example, and says that going through an operation only made her into the “complete woman”.

She says this is why she cannot accept being called ‘katoey’ or the more recent term ‘saoprapetsong’, which loosely translates to ‘second-type woman’. Instead, Yollada says the more appropriate phrase for her would be ‘phuying khamphet’, which she translates as ‘transsexual female’ or ’trans- female’. Or, if her group’s campaign succeeds, apparently just plain ‘woman’.

It is a stance that has left some transgenders and gays so upset that they called a press conference to counter what a few have described as an “unrealistic” view. While they support the call for transgenders to be able to address themselves as ‘Miss’ or ‘Ms’, they say that they do not want to mislead people into thinking they are biologically born women and have no problems saying that they had sex-change procedures.

At a Jul. 7 press conference, Natee Teerarojjanapongs of the Gay Politics Group of Thailand said that “there should be a note (in identity documents) somewhere that they got the title (‘Ms’ or ‘Miss’) not by birth but by changing their gender”.

He said this is important to prevent people from “exploiting” others, such as not telling would-be partners about their inability to bear a child. He added, “If they participate in female sports, they (have) an advantage because they are stronger physically.”

Phongtorn Chanluen, chairman of the Rainbow Sky Association of Thailand, also agrees that transgenders should be able to call themselves ‘Ms’ or ‘Miss’ – albeit with some caveats.

“Most transgenders need this title because it fulfills their feeling of being a woman,” he says. “However, this should be just an option. It does not mean everyone who (undergoes a sex-change operation) has to change title.”

“It is also important to have a record to explain that they are transgenders, not women by birth,” says Phongtorn. “This is for the sake of both social and medical context.”

He thinks that for the time being, the term ‘katoey’ works fine. According to Phongtorn, it’s a term that is “neutral”, unlike ‘saoprapetsong’, which he says makes transgenders “still unable to be (themselves)”.

“If a new term is needed for them,” he says, “I think it should be anything that is not under the frame of male or female.”

Natee, for his part, is comfortable with being called ‘gay’. Actually, he says, it is the attitude, and not the term, that concerns him. “No matter what words you use,” says Natee, “so long as the context shows respect, it’s okay with me.”