NAIROBI, Jul 27 2011 (IPS) - On the road between the Kenyan and Somali border lie the dead bodies of children who have succumbed to the famine and the hardships of making the journey from their drought-stricken villages to Kenya. 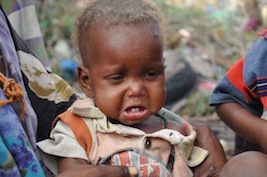 And it is the story of these children who die between Somali’s southern town of Dobley, which is the last border town before crossing into Kenya, that is yet to be told, aid workers say.

Ahmed Khalif, who works for a local non-governmental organisation in Kenya and regularly crosses the border between the two countries for his work to aid people in Somalia, talks of seeing the bodies of numerous children on the roadside.

“I am a regular on the route between the Kenyan and Somali border, anyone who has used this route will narrate horrific stories of dead bodies, mostly children.

“Their mothers are dying too. It’s not a heartless mother leaving a child behind, just a mother who wants to survive for the sake of living,” attests Khalif.

He says he sees droves of mostly women and children attempting to cross the border to Kenya. But when the children become too weak to walk any longer, they just fall down on the roadside while their mothers and families, half dead with starvation, continue to walk on in an attempt to reach the border and hopefully, aid.

“It is a shocking image to see (children) on the brink of death, their skin sagging from extreme dehydration, their frame too small for their height, their lips dry. They don’t talk, they just lie there.

“(Their) eyes sink into their sockets, but still they stare back at you. It is very disturbing. You think the others are heartless for abandoning them, but they too are in the same physical shape. Only the will to reach Dadaab keeps them going,” Khalif explains.

Those children who die along the way are not buried.

“Who has the extra strength to do so? Those moving on are very weak too, they just keep going…at the camp, that’s where they get buried. When they die there,” Khalif says adding that Dadaab has a makeshift graveyard.

Those Somali children who have survived and make it to the Dadaab refugee camp in Kenya have done so after enduring unimaginable levels of hardships, walking for at least 10 days in intense heat, through a hyena-infested no-man’s land, to get to the camp.

“The Al Shabaab (extremist group that controls much of southern Somalia) continues to make it difficult for people to access Kenya and Dadaab by making Dobley, the last border town in Somalia, inaccessible to Somalis who come from Al Shabaab-controlled regions,” Khalif says.

This is despite the fact that the town is now controlled by Somali government forces, who seized control from Al Shabaab three months ago.

So instead of walking 15 kilometres from Dobley to Kenya, many have to take a route that bypasses the town and walk an additional four to nine days just to get to the border.

But this longer route is dangerous. Roaming bandits rape women and steal the meagre possessions of those trying to find aid.

But at Dadaab, which has now become the largest refugee camp in the world with over 380,000 people, life is still difficult, especially for children. Four children die daily as almost 1,300 Somalis fleeing the drought continue to arrive everyday. This is according to United Nations (U.N.) agencies, which say over 300 million dollars are needed over six months to help save the children affected by the drought.

“The children are too small, too light for their age. Their condition has exceeded the global acute malnutrition rate. This drought is reversing gains made in reducing child mortality,” says Oliver Yambi, the United Nation’s Children’s Fund’s (UNICEF) representative in Kenya.

Yambi adds that U.N. agencies are now encountering malnutrition levels of up to 35 percent, a severe form of malnutrition characterised by extreme weight loss and children having a very small frame for their age.

The World Health Organisation has set a 15 percent threshold against which the extent of malnutrition is measured. Anything above the 15 percent mark shows an advanced state of acute malnutrition and children in this stage rarely survive. They are 10 times more likely to die before age five.

According to UNICEF, the number of acutely malnourished children under five years in Somalia increased from 476,000 in January to 554,550 in July.

And their mothers are not faring any better.

“Children are not the only ones dying at Dadaab. Maternal mortality is very high. We estimate that for every 100,000 live births, at least 298 women will die. But these figures are moderate. The numbers are rising due to the extreme anaemia as well as the ratio of patients to nurses. On average, there is one health facility for every 1,700 refugees and counting,” explains a source from OXFAM. Eighty percent of the refugees in the region are women.

The U.N. said in a statement on Jul. 27 that the famine can lead to complications during pregnancy and childbirth and increases the risk of maternal deaths and infant illnesses.

“Experts estimate that eliminating malnutrition among mothers can reduce disabilities in their infants by almost one third.