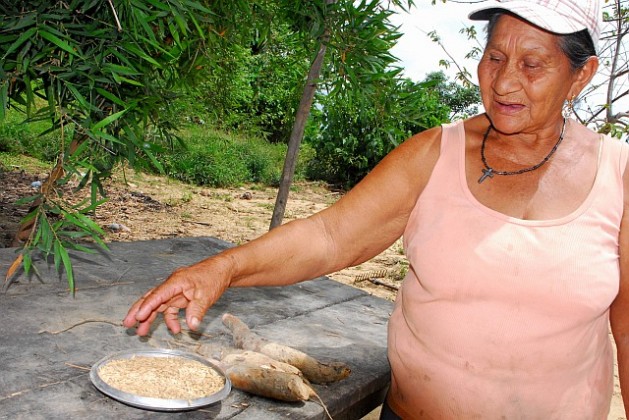 Margarita Amabeja with the rice seed she is about to plant, and this season's first cassava. Credit: Franz Chávez/IPS

COMUNIDAD SAN LORENZO, Bolivia, Dec 20 2011 (IPS) - Margarita Amabeja holds out her hands full of golden rice grains and rough brown manioc roots – the first results of a strategy to adjust the agricultural cycles to the seasonal floods and droughts in the vast plains of Beni, in northeastern Bolivia.

Amabeja, an older widowed farmer who is the head of her family of four, directs the productive activities on the small farm where they grow corn, rice, vegetables and other food.

Now she is calmly waiting for the rains, which fall on the Andes mountains to the west and run down to the Amazon floodplains in torrents.

But the old fear of losing everything has disappeared from her face. Some 1,250 families like hers are receiving technical assistance in the municipalities of Santa Ana del Yacuma, San Joaquín and San Ramón in Beni, a region of wetlands, savannah and jungle where three-quarters of the population lives in poverty.

A system of hydrometeorological information, weather forecasts and early warnings alerts the municipalities and local residents about events such as the arrival of a flood, by means of satellite signals.

The system forms part of an agricultural risk management programme run by the local office of the Food and Agriculture Organisation (FAO) and financed between 2009 and May 2011 by official development aid from Italy.

The programme has also focused on improvements in the production of rice, cassava, corn and vegetables, to ensure supplies during times of scarcity.

The strategy is based on shortening the crop cycle, to mitigate the risks posed by weather events and natural disasters, the head of risk management in the local FAO office, Óscar Mendoza, told IPS.

Between December and March, huge areas in Bolivia’s eastern lowlands are flooded, and almost all of the crops are destroyed, while housing and other infrastructure is damaged.

FAO suggested that local farmers adopt a modified crop calendar and plant short cycle varieties of corn and rice, to avoid losses caused by flooding. In addition, large ponds were built to conserve water for times of drought.

Mendoza said the idea of harvesting before the arrival of “la gateadora” – floodwaters caused when the rivers overflow their banks – was welcomed by local farmers like Amabeja.

In this Amazon plain located 900 km northeast of La Paz, normal life grinds to a halt when in the space of a few hours “la gateadora” or crawling flood covers the fields, besieges villages and towns, isolates entire communities, and interrupts farm and ranching activities.

When the rivers flood, the plains are suddenly transformed into lakes, covered with up to one metre of water, Zamira Cortez, head of the risk and natural disaster unit of the municipal government of Santa Ana del Yacuma, where the village of Comunidad San Lorenzo is located, told IPS.

When that happens, Cortez organises a shelter in the town of Santa Ana, stocking it with food and other supplies, staffing it with medical personnel, and equipping it with chemical toilets until the waters go back down and people can return to their homes.

The job is not easy. She often goes out in a boat to look for people left stranded by the floodwaters and carry them to safety. Cortez laments that so many fail to go to the shelter before the flooding makes it impossible for them to move.

The floodwaters kill cassava, the staple food of the 23,500 people in the municipality made up of 40 villages, Mendoza said.

After the waters recede in April, the plains get so dry that it is difficult to plant.

The flooding and subsequent drought are followed by cold temperatures in the winter, as well as forest fires, which start either by accident or as a result of the slash-and-burn technique that farmers use to clear their land.

But the results of the changes brought about by the FAO programme are promising.

The planting of cassava was moved ahead to May or June, and the harvest takes place seven months later, which reduces the losses caused by flooding and makes it possible to save stalks for the next planting. Varieties more suited to local conditions were also introduced.

And farmers produced 1,500 kg of rice and 900 kg of beans per hectare – quantities that enable families to not only feed themselves but to sell surplus production in the small markets of the villages on these lush green plains.

With the new techniques that have emerged as a result of research for adaptation to climate change, yields have increased by up to 30 percent, according to Mendoza, who has been working in the area for four years.

The initiative was also expanded to the forage produced by some 200 families that raise livestock on a small scale – up to 100 dairy or beef cattle, which supply the small local markets.

All of these measures are focused on curbing the fall in production caused by people abandoning their farms to work for large landowners or to move to the cities or head overseas, Sheila Hurtado, the head of the productive development unit of Santa Ana del Yacuma, told IPS.

Because of the flooding, half of the local food producers have abandoned their farms. “Many left the region, and others abandoned agriculture to become farmhands on large ranches,” she said.

Until recently, this area also produced large harvests of oranges, grapefruit, and tangerines. But the climate has killed off the orchards. “Climate change is killing the food producers of Santa Ana,” Hurtado said.