KARACHI , Mar 7 2012 (IPS) - “We want our homeland; we want freedom from Pakistan and will fight till our last breath,” said Zarmine Baloch (23), veiled from head to toe with just her eyes showing. 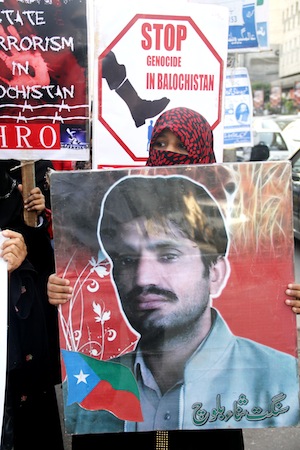 She said the recent killing of her brother would not force her to surrender her struggle. Sitting beside her Maheen Baloch, sister of the late Qambar Chakar, a student activist who met a similar fate in May 2011, nods in agreement.

Zarmine is certain her brother Sangat Sana (27), a member of the Baloch Republican Party (BRP) who demanded equal rights for the Baloch people, was killed to avenge the Pakistan army’s humiliation in February, when representatives of Human Rights Watch and Amnesty International testified before the Foreign Affairs Sub-Committee on Oversight and Investigations at the United States Congress about the grave violations committed by Pakistan’s security forces in the province of Balochistan.

“The message was quite clear,” Zarmine told IPS quietly, while participating in a sit-in outside the Karachi Press Club sponsored by a group called Voice for the Baloch Missing Persons. “He (Sana) was killed just a week after the hearing (before the U.S. congress) on Feb. 13.”

“Just two days prior, my sister and I had told the international media that we suspected the army’s intelligence agencies – the Inter Services Intelligence (ISI) and the military intelligence – to be behind his abduction in Dec. 2009. His body had 28-bullet wounds and he was thrown from a helicopter,” she said.

The largest of the four provinces, Balochistan was an independent state until 1947, when Pakistan annexed its Eastern front and Iran its Western region.

A separatist insurgency gripped the country from its inception until, in 1972, then-Pakistani president Zulfikar Ali Bhutto sent the army in to quell the Baloch uprising, which had already claimed thousands of lives. In 2006, General Pervez Musharraf killed 80-year- old tribal leader Nawab Akbar Bugti, hoping his death would end the rising insurgency but that too failed to repress the nationalists.

Disappearances and targeted killings by state authorities are not the only atrocities gnawing at the very fabric of the province, but also killings of settlers by Baloch nationalists and the ethnic cleansing of a Muslim minority group as well.

The restive province is witnessing more gruesome crimes and violent abuses every day.


The independent Human Rights Commission of Pakistan has, for several years, been sounding alarm bells about “involvement of the security forces in enforced disappearances and killings” in the province, which lies on vital international borders, sits atop lucrative natural resources and has a small population that is fast winning international sympathy.

Sana was among the 14,000 who have since disappeared over the years and among the 350 whose brutally tortured bodies later surfaced.

“Is this how Pakistanis treat fellow Pakistanis?” asked Shadri Baloch, a 16-year-old who saw the tortured bodies of her father and two uncles. Her 20-year-old brother, Mazar Baloch, remains missing.

However, “Our movement won’t weaken because of these killings,” she told IPS, her voice trembling with hatred and hurt.

International support for self determination

While the hearing before the U.S. congress brought the Balochistan issue instant international recognition, the resolution proposed by congressman Dana Rohrabacher on Feb. 17 – stating that Balochs have “the right to self-determination and to their own sovereign country” – provoked extreme reactions from each end of the spectrum.

The proclamation vexed the Pakistan government and its media, who see the move as a “conspiracy to break the country”; but Baloch nationalist leaders greeted the resolution with wild enthusiasm.

Refuting the government’s anger, Ali Dayan Hasan, Pakistan director for Human Rights Watch stated, “Countries are not made or broken through hearings or resolutions in the U.S. Congress. That is only up to the people of a country but at least this hearing and Congressman Rohrabacher’s ill-advised resolution has forced Pakistan’s political and military leaders to pay attention to the human rights hell in Balochistan.”

In a tele-conference on Feb. 22 he told reporters, “(The U.S.) must intervene in Balochistan and stop the ethnic cleansing of Baloch people.” He supported “any and all foreign intervention in the province whether it be by the U.S., NATO or India”.

The chief minister of Balochistan, Nawab Aslam Raisani, added he has “confirmed reports” of external intrusion in the province. He warned the European Union Ambassador to Pakistan, Lars-Gunner Wigemark, that foreign support for secession could bring the province to the brink of civil war.

Akbar S. Ahmed, a Pakistani professor currently serving as the Ibn Khaldun Chair at the Washington D.C.-based American University, is deeply disturbed by the groundswell of insurgency in Balochistan.

Terming it “a result of decades of mismanagement by the central government” he reminded IPS that a similar “ethnic insensitivity” led to the break away of Pakistan’s Eastern wing, then a provincial state, in 1971, resulting in the creation of present-day Bangladesh.

Physicist and peace activist, Pervez Hoodbhoy, maintains a similar view. “Pakistan’s narcissistic centre still believes it has done no wrong; ascribes the uprising of locals to outside powers or perhaps a few ‘troublemakers’; thinks that physically eliminating a few hundred of these people will solve the problem; and pushes the ‘one nation, one people’ notion in spite of contrary evidence.”

Hoodbhoy pointed out, “Multinational states exist everywhere” citing India as an example. “If the centre had wisely exercised its powers, today’s situation would have never arisen. An independent Balochistan is not a serious possibility yet, but the centre seems only too willing to walk the path of national suicide. If Balochistan ever becomes independent after some horrific bloodbath, it shall squarely be the fault of Pakistan’s army,” he said.

Experts like Ahmed, chair of Middle East and Islamic Studies at the U.S. Naval Academy and former high commissioner to the United Kingdom, thinks there is still time to save the situation.

“I do not think that Balochistan has quite reached the point (of separatism) yet. But the Pakistani leadership has to be much more active in finding genuine and permanent solutions to Balochistan’s long- standing grievances,” he told IPS.

He added, “Pakistani leaders must ask themselves seriously why do the Baloch feel they are being denied their rights? They then have to provide the answers. The situation cannot go on much longer as it is”.

Even Hoodbhoy thinks, “Pakistan must listen to what the Balochs say – and then act. (Balochs have long made the claim that) security agencies must stop their murderous ‘abduct-torture-kill-dump’ routine; cantonments should be dismantled and a new formula for natural resource distribution evolved. If Pakistanis value the Baloch people rather than the wealth under their (feet), they must be prepared to compromise to the extent necessary.”

Twenty-eight-year-old old Malik Siraj Akbar – journalist and editor of Baloch Hal, an online newspaper – who has recently been granted asylum in the U.S. due to threats to his life, believes there is a way out of the debacle if “immediate measures” are put in place.

“Stop the military operation even if it is conducted by the Frontier Constabulary (a paramilitary force under the command of the Pakistani army) and curtail its power; induct more Balochs into the force; release all, or most of the missing persons and investigate the elements behind the ‘kill and dump’ operations,” are some of Akbar’s suggestions.

He believes that unless certain confidence-building actions are taken to help bring the “disillusioned”, exiled Baloch leaders to the negotiating table, there will be no peace.

But according to Raisani, the Baloch leaders are not willing to accept anything short of freedom for their people, which, according to Ahmed, could morph into “a full-blown movement for independence supported by foreign powers.”

“(This) will be devastating, as Pakistan is already stretched to its breaking point economically, militarily and in terms of national unity,” said Ahmed who served as commissioner of three divisions of Balochistan.

“Balochistan has every (ability) to survive on its own, from its mineral wealth to its geo-strategic location,” Akbar said.

If Balochistan goes up in flames, “Pakistan will lose its border with Iran, huge reserves of natural gas, gold and copper, entry into Afghanistan, several important air and naval bases, and a port at Gwadar,” he stressed, adding that the army was “underestimating” the power of the people.

Many experts, including Hoodbhoy, believe the army has not yet grasped how incendiary the situation really is.

“The army’s actions speak louder than any words: General Kayani says there is no military operation being conducted in Balochistan. Very well, then just who is flying helicopter gunships there? Murdering Baloch students, activists, and leaders?” he asked.

As a result of this denial of violence in the region, “Emotionally, the dismemberment of the province has already begun,” Akbar concluded.