LILONGWE, May 29 2012 (IPS) - As she sits down to watch the 8pm news on TV, Mercy Kamphoni from Chamtulo Village in Malawi’s Mangochi lake district looks elated. She still cannot believe that she is the new proud owner of a television set, refrigerator and radio. 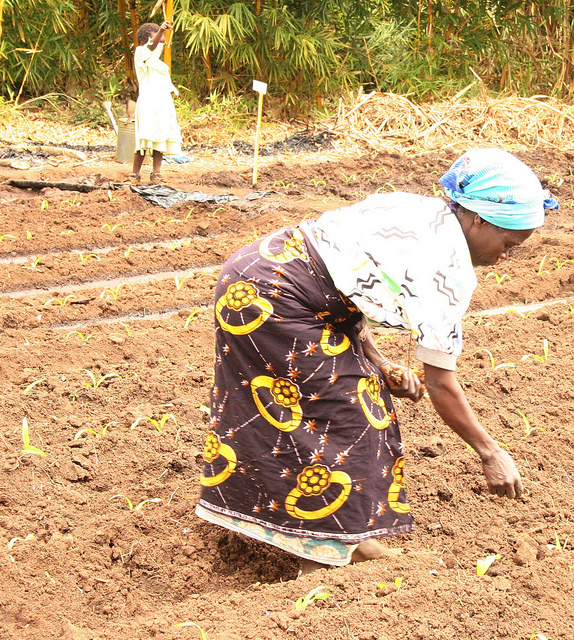 Mercy Kamphoni is able to send all her children to school and provide for her family’s needs – thanks to paprika. / Claire Ngozo/IPS

These electronic goods are seen as luxury items in this southern African nation where 74 percent of the population lives on less than 1.25 dollars a day. And they are just a few of the many “exclusive” things that Kamphoni owns.

For a woman living in rural Malawi, Kamphoni is considered to be well-off. She also owns a bicycle, a treadle pump – a suction pump that is positioned on top of a well – for irrigating her crop, and a silo for storing the harvest.

Kamphoni, 44, has managed to amass all these things over the last three years since she started commercial farming and abandoned subsistence farming, which she began when she married at 16.

Now divorced for four years, and with five children between the ages of six and 14, Kamphoni is able to send all her children to school and provide for her family’s needs – thanks to paprika.

“I only grew maize because that was the norm. Almost everyone in this country grows maize and that’s what my ex-husband and I did until he left my children and me. Afterwards I had to search for ways to survive and take care of the children,” Kamphoni told IPS. “I was introduced to a women farmers’ club and that’s where I learnt that one could make money from growing paprika.”

In fact she earns roughly three times more than she did when she farmed maize. A kilogramme of maize sells for 35 cents while a kg of paprika earns Kamphoni one dollar.

“Paprika is the best option for Malawi. It provides me with a profit four times the amount I invest in growing it,” said Kamphoni.

The Farmers’ Union of Malawi (FUM) is encouraging smallholder farmers to diversify to commercial farming, which it says is more sustainable.

“We agree that growing maize is good for people’s daily livelihoods as they’re assured of an availability of it in their households. But cash crops such as paprika are even more viable and sustainable as they allow farmers to make money with which they can buy a diverse range of products,” FUM president Felix Jumbe told IPS.

In addition to promoting paprika, FUM is also urging farmers to start growing mushrooms and soy beans, which are also in demand. However, not many farmers are aware that paprika has the potential to be a significant foreign exchange earner here.

Tobacco is Malawi’s main revenue earner, accounting for up to 60 percent – or 950 million dollars – of foreign exchange. The country’s tobacco accounts for five percent of the world’s total exports, according to the Ministry of Agriculture.

However, Jumbe said that tobacco sales have not been doing well, as a result of the successful efforts of international anti-smoking lobbies. In 2011 the tobacco exported by Malawi amounted to 210 million kgs, but sales for 2012 are only projected to be 151.5 million kgs.

According to a 2011 report by the Ministry of Agriculture on the potential earnings paprika could generate, there is a market for 10,000 metric tonnes. Sales could amount to 9.4 million dollars. Currently the country’s farmers only export 500 metric tonnes of the capsicum fruit, which brings in 470,000 dollars in foreign exchange.

Gladwell Kwapata, a 51-year-old farmer from the central district of Mchinji, is one of the few farmers who have chosen to abandon tobacco for paprika.

Prior to this Kwapata was a tobacco farmer for 21 years.

“But over the past five years, tobacco sales have been dwindling, with the average price dropping from 2.5 dollars to less than a dollar a kg. This was threatening my family’s livelihood, hence I switched to paprika,” he told IPS.

Malawi’s new President Joyce Banda seems to realise the important role that paprika could play in the country’s economy.

She told parliament on May 18 during her state of the nation address that she would like to see a sustainable paprika industry in the country.

“Agriculture plays a vital role in the socio-economic development of the country. Government is determined to eliminate hunger and to ensure that no child in Malawi goes to bed on an empty stomach, let alone dies of starvation,” Banda said. Nearly one in 10 children in this country die before their fifth birthday.

She said that her administration’s overall goal for the agricultural sector was to generate growth and wealth creation through commercialising farming, the promotion of regional markets, and crop diversification. Banda said this would require the introduction of new policies and institutional changes.

Meanwhile, Kwapata is reaping the benefits from switching crops.

“I have been growing paprika for the past two years and I am already enjoying the fruits of my labour. I was able to make a profit of over 1,500 dollars just in the last year,” he told IPS.