RIO DE JANEIRO, Jun 7 2012 (IPS) - Brazil spends some 10 billion dollars a year on health care for smokers – more than three times the tax revenue from the tobacco industry in this country, which is the world’s top exporter and second producer of tobacco.

The effects of tobacco consumption in Brazil can be measured by the economic impact, according to a study by the state Oswaldo Cruz Foundation (Fiocruz), dedicated to public health, and the Alliance for the Control of Tobacco Use (ACT), a civil society organisation.

The report “Carga das doenças tabaco-relacionadas para o Brasil”(Burden of tobacco-related diseases in Brazil), launched by ACT in Brasilia May 31, says the costs of treating smoking-related illnesses like cancer, heart disease, lung diseases and strokes is equivalent to 0.5 percent of GDP. 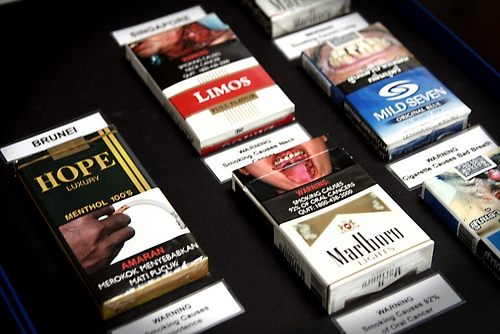 ACT executive director Paula Johns told IPS that the study calculated the costs of treatment of the 15 main tobacco-related illnesses. But she pointed out that overall, smoking plays a role in 50 diseases.

“The tobacco industry takes no responsibility for the cost, and argues that it pays a lot in taxes. The burden of treating the diseases falls on the public health sector,” she said.

In 2011, the total tax revenue from Brazil’s tobacco industry amounted to three billion dollars, less than one-third of state expenditure on treating patients with tobacco-related ailments.

According to Johns, taxes on the sector should be at least tripled, to cover the costs that active and passive smokers will generate after two or three decades of smoking. “In addition, indirect costs like early retirement should be taken into account,” she said.

Brazil has a population of nearly 200 million, of whom 25 million people are smokers, 15 million of them men. But Johns said the bad news is that women and children are beginning to smoke more, and from an earlier age.

The aim of the study is to demonstrate the need for more regulation of the tobacco industry and for more investment in prevention measures to curb addiction to smoking.

“Prevention is not just about running educational campaigns; access to cigarettes must be made harder, with higher prices and fewer sales outlets,” Johns said.

A pack of cigarettes in Brazil now sells for three dollars.

The country is the world’s second largest tobacco producer, after China and ahead of India and the United States. Last year 85 percent of Brazil’s tobacco was sold abroad, making it the leading tobacco exporter, a position it has held since 1993. Foreign sales brought in 2.89 billion dollars.

The ACT study, the first to measure the economic impact of smoking in Brazil, describes the profile of the country’s smokers as predominantly black, poor, rural dwellers with limited education.

The study reported that 20 percent of smokers began before the age of 15, and most of the rest started before they were 19.

Another indicator that alarms the authorities struggling to reduce consumption is that 60 percent of teenagers who start smoking do so with cigarettes containing additives with flavours such as cherry, chocolate or mint.

Study coordinator Márcia Pinto said the economic cost to the state could be reduced to a minimum because all the diseases caused by smoking can be prevented.

“All that money could be invested in vaccination programmes, wider access to cancer diagnosis and treatment, and sanitation programmes,” Pinto, of the Fernandes Figueira Institute which is part of Fiocruz, told IPS.

Pinto, who coordinates a team of six researchers, has been studying different aspects of the tobacco industry for 12 years. She emphasises that measuring the cost of smoking for the country is essential in order to promote public policies to prevent children, teenagers and women from being drawn into consumption.

The expert pointed out that smoking is the cause of 90 percent of cases of lung diseases.

The study found that heart disease, followed by lung diseases including lung cancer, and strokes, accounted for 83 percent of smoking-related costs in the public health system.

In 2011, about 30 percent of the total budget of the National Health Fund (FNS) which manages the resources of the state unified health system (SUS) was devoted to treating smoking-related illnesses.

In spite of this, the study says, the average life expectancy of smokers is at least five years less than that of the general population.

“Smokers lose five years of their lives. Tobacco addiction is an illness, and it is also related to alcoholism and a sedentary lifestyle,” said Pinto.

The same figure represents half the annual budget of the Growth Acceleration Programme (PAC), the second phase of which was launched by President Dilma Rousseff to provide the infrastructure the country needs.

Smoking is responsible for the deaths of 5.4 million people worldwide every year, according to the World Health Organisation (WHO).

WHO predicts more fatalities in future: in 2030, deaths from smoking will total eight million, 80 percent of them in developing countries.

The global cost of smoking-related illnesses is 500 billion dollars a year, according to the American Cancer Society. (END)