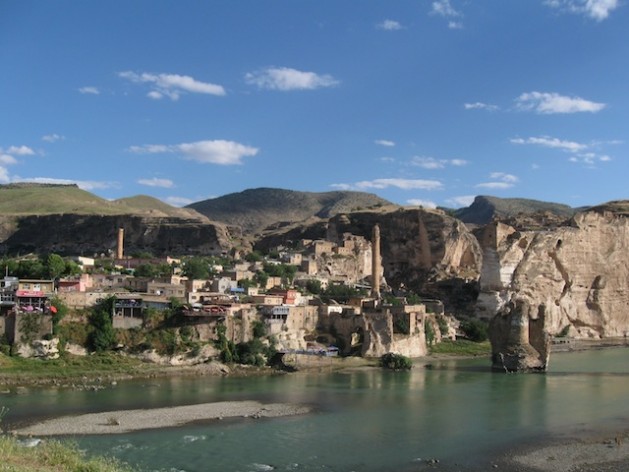 The village of Hasankeyf lies above the Tigris River, whose flow has carved out rock formations over the course of millenia. Credit: Jay Cassano/IPS

HASANKEYF, Turkey, Jun 10 2012 (IPS) - Hasankeyf, a small village in southeastern Turkey, has been under threat for 15 years. Home to approximately 3,000 people, the site is one of the oldest continuously inhabited human settlements, with an archaeological record going back at least 9,500 years.

Now, the Ilisu Dam – part of a massive hydroelectric project undertaken by the State Hydraulic Works – will flood Hasankeyf and the surrounding region, effectively washing away millennia of history.

In addition to destroying a historical site, which includes vestiges of every empire that ever inhabited Mesopotamia, the dam will also cause immense ecological harm to the Tigris River valley.

Derya Engin, who staffs the Hasankeyf office of the Nature Society, a Turkish NGO, told IPS that numerous endangered species will lose their habitat if the dam is built.

“The Tigris is the only untouched river ecosystem in Turkey and it is vital that it remain that way,” she warned. “It is well-known that dams dramatically change the climate of entire regions. This dam will destroy the habitats of fish, birds, and plant life, some of which are unique to the Tigris valley.”

Construction of the dam began in earnest in 2008, but plans for its implementation date back even further.

The dam was originally conceived in the 1950s as part of a plan, called the Southeastern Anatolia Project (GAP), intended to develop the infrastructure of largely rural and Kurdish southeastern Turkey. Since 1997, several European finance consortia have attempted to fund the project, only to withdraw support before anything concrete materialised.

The European banks and companies pulled out in large part due to massive solidarity campaigns against the dam in their respective home countries. In 2009, the German, Austrian and Swiss governments revoked the export credit guarantees to the final consortium because the Turkish government failed to meet the ecological, social, and cultural heritage standards set by the World Bank.

For a while, activists in Turkey and throughout Europe believed they had won the fight and that construction of the dam would stop. To their surprise, construction is continuing to this day.

It was later revealed that the Turkish government had quietly secured funding from two of the country’s largest private banks, Akbank and Garanti, making the project still viable.

The Turkish government’s reasons for pressing ahead with the controversial project are not what one might expect. Projections place the amount of hydroelectric power the dam will produce at less than 2 percent of Turkey’s total energy needs. Not an entirely insignificant amount but certainly, according to various sources, not enough to justify the destruction of an entire ecosystem, invaluable cultural heritage, and the livelihoods of several thousand people.

The Turkish government has openly proclaimed that the main function of the dam system is to bolster the country’s counter-insurgency strategy against the Kurdistan Workers’ Party (PKK), which mobilises from the mountainous Iraqi-Turkish border. Together, the strategically placed dams created by GAP will form a massive wall of water close to Turkey’s border with Iraq.

Having flown through the Hasankeyf for millenia, the Tigris has created a vast canyon topography that is not only visually spectacular but also provides necessary cover for militants. In addition to raising the water level of the Tigris, flooding from Ilisu Dam will spill over into nearby canyons that are currently dry.

With canyons filled and massive lakes created where rivers once flowed, the terrain will become impassable by foot.

Furthermore, the effects of the dam will extend beyond Hasankeyf, well across national borders. By virtue of being upstream from Iraq and Syria on both the Tigris and the Euphrates Rivers, Turkey effectively controls the flow of water southward.

With the Euphrates already heavily dammed, the Syrian and Iraqi governments have raised serious concerns about dam projects on the Tigris. Twice the region has been on the verge of water wars, once in 1975 and again in 1990. Restricting water flow from the Tigris could prove to be a tipping point in the incendiary region.

Activists believe that, ultimately, the dam will turn water into a political tool both inside and outside Turkey’s borders. “We know that the dam is really about security,” Mehmet İpek, a young local activist, told IPS.

Down the road, Mehmet Ali, a shopkeeper selling tourist souvenirs, lamented the imminent loss of his home. “They are condemning a place like this, with no equal in the world, for a dam that will only operate for 50 years.”

Today there is little recourse left to stop construction. The European Court of Human Rights (ECHR) could theoretically put a hold on the project. A case was brought before the court in 2006 but rejected on the grounds that the ECHR protects human rights, not cultural heritage, ignoring the approximately 35,000 people who will all be forced to give up their way of life if the dam is constructed.

A new case is being submitted to the ECHR after a Turkish regional court rejected it this week. Locals hope that it will work, but are not deceiving themselves. They have learned from experience how determined the state is to continue with the project.

Ömer Güzel, a shop owner and local activist in Hasankeyf, told IPS that at one point the villagers held protests every week. “It didn’t accomplish anything,” he said. “In the end the dam is still being built right now.”

The government has kept the construction site, 16 kilometres downstream from Hasankeyf, under heavy security. However, sources with access to the site, who spoke to IPS on the condition of anonymity, claim that the dam is already half completed.

There is still a chance that the United Nations Education, Scientific and Cultural Organisation (UNESCO) might list the area as a World Heritage site, effectively guaranteeing its protection.

To qualify for World Heritage status, a site must meet one of 10 criteria for outstanding universal value in an area of cultural or natural significance. Hasankeyf, as the only site in the world that meets nine of the 10 criteria, is an exceptional candidate for inclusion.

Unfortunately, that fact alone is not enough to be listed. “In order to be included as a World Heritage site, the country in which the site is located must submit an application to UNESCO. The Turkish government has not done this,” Engin explained.

A UNESCO delegation previously visited Hasankeyf and, upon taking stock of the area, urged the Turkish government to apply. The implication was that if Turkey applied, Hasankeyf would be accepted.

“But the government does not want to protect this area, so why would they apply? The dam project is too important to the state,” Engin pointed out.