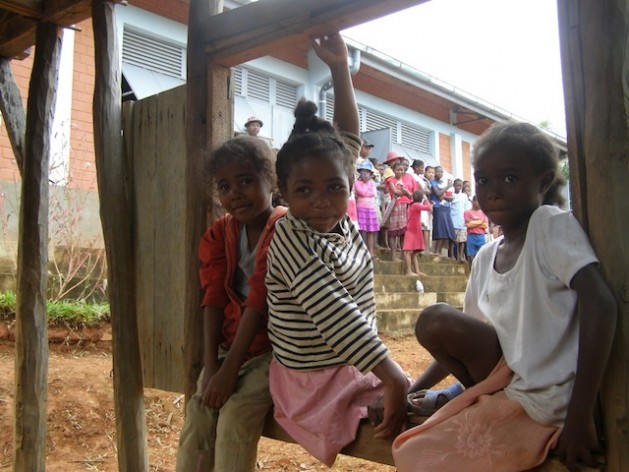 The United Nations Children's Fund (UNICEF) has built eco-friendly schools for children in Marolondo, a village in the Fénérive-Est district, 450 kilometres northeast of Antananarivo, the capital of Madagascar. Credit: Alain Raktondravony/IPS

ANTANANARIVO, Jun 26 2012 (IPS) - This year, the cyclone season’s heavy rains did not mean the usual days off school for children in Marolondo, a village in the Fénérive-Est district, 450 kilometres northeast of Antananarivo, the capital of Madagascar.

New classrooms, built with support from the United Nations Children’s Fund (UNICEF), mean the students can study while being sheltered from the rain and sun. The ruins of old wooden structures have become playgrounds.

Eleven-year-old Angita, in her third year of primary school, said she was happy with the new buildings.

“It’s very nice to study in the new classrooms,” she told IPS. “The sun doesn’t beat down too hard, and when it rains, we are protected.”

According to Daniel Timme, head of communications at UNICEF Madagascar, the classrooms’ roofs were specifically designed and constructed to make the heat less oppressive.

Angita remembers the previous years, after the old school building was destroyed by a cyclone in 2008. “After the cyclone, we studied in tents. But it was very hot, and I always wanted to sleep,” she said.

“Then later, the wind destroyed the tents. The water came in when it rained and the sun turned everything into mud. So we had to go home and only come back to school when the weather was drier.”

Parents are equally satisfied with the new infrastructure, which is meant to be cyclone-proof. Fénérive-Est is a region that is frequently hit by cyclones, and parents are often worried about sending their children to school during the rainy season. Since the new school was built, more parents have allowed their children to go to school.

“Parents are less anxious, and we have seen an increase in the number children registered for public primary schools,” the chief of the village, Bruno Tsimitoa, told IPS.

For UNICEF, which provided about 1.3 million dollars for the construction at Marolondo and 57 other sites across Madagascar, the project goes beyond creating a safe and pleasant environment to study. The goal is also to reduce the impact of construction on the environment while meeting the objectives of the Education for All programme.

Madagascar needs to build 3,000 classrooms every year until 2015. Added to this, the education ministry also has to rebuild and refurbish the roughly 1,000 classrooms damaged or destroyed by cyclones every year, according to figures from UNICEF.

“Imagine the consequences it would have for the environment if the bricks used for all this construction were made using traditional methods,” Timme told IPS. “To put up just two classrooms calls for 14,000 baked earth bricks, which requires burning up firewood equivalent to one hectare of forest – and spewing 200 tonnes of CO2 into the atmosphere.”

And so the concept of an eco-friendly school has been launched. “It calls for an approach which promotes techniques and construction materials that respect the environment,” Timme said.

“Instead of baked earth, we’re using rammed earth bricks, and the materials are available locally,” Jacques Ramaroson, coordinator of the NGO charged with the school building project in Marolondo, told IPS. “We only add a little bit of sand and rebar – the earth is treated according of the type of soil. And we don’t need cement to put up the walls because the bricks are self-locking.”

Ramaroson also said building with rammed earth bricks is up to 25 percent cheaper than traditional methods. The time needed to build a school is also shortened. “The Marolondo school block was built in only three months.”

With its pilot buildings at sites in all seven regions of the island, UNICEF also hopes to develop local capacity and knowledge of the materials and techniques, and set an example for other institutions and businesses involved in construction in Madagascar.

One objective of UNICEF has already been achieved. “Private construction companies have begun using the process in other regions,” said Ramaroson, “while local artisans have begun making machines for rammed earth bricks.”