The Resurgence of Polio in Nigeria 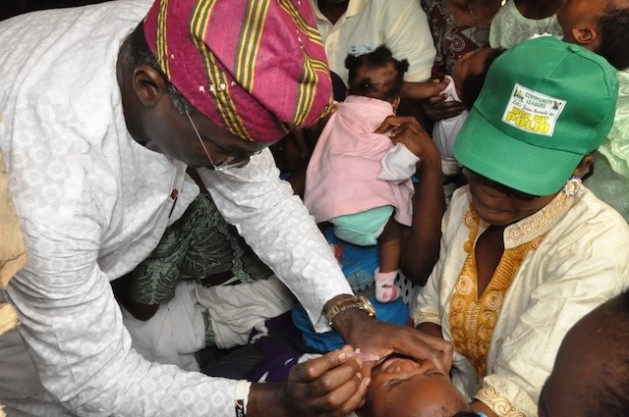 LAGOS, Nigeria, Jun 19 2012 (IPS) - Twelve-year-old Sunday Oderinde sits by the side of the road with both legs folded under him and watches his friends play a game of soccer on the streets of Iwaya, a suburb in Lagos, Nigeria. It is a game that he would love to join in but cannot.Oderinde contracted polio as a child. Though 90 percent of polio infections cause no symptoms at all, Oderinde’s limbs were paralysed. Now he can only walk with the help of crutches, which he keeps by his side as he watches as the game plays out on a makeshift football pitch.

“I watch them playing, but I cannot play because of my condition. I saw some people like me with roller skates on television playing ball with their hands. I would like to play like them if I have the chance,” Oderinde tells IPS.

When Oderinde was a baby his mother, Aminat Jimoh, did take him to the local clinic for his immunisations and vaccinations. Among those he received were doses of the oral polio vaccine (OPV), which is administered to children under the age of five.

According to the Global Polio Eradication Initiative, while OPV is highly effective against all three types of wild poliovirus (WPV), one dose of the vaccine only produces immunity in 50 percent of recipients. “Three doses produce immunity in more than 95 percent of recipients. Immunity is long-lasting and probably life-long.” In Nigeria, five doses of the vaccine are administered.

And like many mothers here in this West African nation, Jimoh, an informal trader, did not continue taking her child to the clinic to receive the full schedule of OPV dosages.

She tells IPS that at the time she was so busy trying to fend for her family that she did not feel it was important.

“I have to take care of my family and my trade occupied my time. I did not remember to take him for all the rounds of immunisation. That was my mistake.

“We noticed when he turned two years, Sunday could still not walk … and by the time we finally took him to hospital, it was too late,” she says.

Attitudes like this are among the reasons that Nigeria remains one of three countries, including Pakistan and Afghanistan, still battling the WPV.

Tommi Laulajainen, chief polio communications officer for the United Nations Children’s Fund (UNICEF) in Nigeria, tells IPS that in key infected states like Borno, Kano, Sokoto and Yobe, which are all in the country’s north, one in three children have received less than four of the scheduled five doses of OPV.

He adds that the number of times health officials visit households during national immunisation days to vaccinate children has dropped, which has led to a reduction in the number of children who receive OPV.

“Children are missed during immunisation campaigns due to a mixture of operational and social factors. Low routine immunisation coverage is a major contributor to Nigeria’s situation,” he explains.

Laulajainen says that as of May 2012 Nigeria recorded 32 cases of WPV in 10 states. This was an increase from the 16 cases that occurred in six states for the same period in 2011.

“Nigeria remains the only polio endemic country in Africa. This year the country has contributed 90 percent to the polio burden in Africa and more than 50 percent of this year’s cases worldwide are from Nigeria,” he says.

In addition, polio-free states like Kaduna, in north-central Nigeria, and the neighbouring nation of Niger have been re-infected in 2012. The Global Polio Eradication Initiative says that Niger will continue to be at risk for re-infection until Nigeria interrupts transmission of WPV.

According to the World Health Organization, the continued failure of Nigeria to end polio will cause the virus to spread to neighbouring countries, which had been previously declared polio-free.

“As long as a single child remains infected, children in all countries are at risk of contracting polio. The success of polio eradication in Africa rests on Nigeria interrupting the virus,” the WHO says.

However, analysts blame the increase in polio cases on a number of other problems, including corruption.

Dr. Olarenwaju Ekunjimi, president of the Association of Resident Doctors at the Lagos University Teaching Hospital, says corruption is hindering Nigeria’s ability to interrupt transmission of the virus.

“Everybody wants to make money out of the system so long as donors continue to pump money into the programme. If the government achieves total eradication of polio, the funds will stop and people benefiting from it will lose out,” says Ekunjimi.

President Goodluck Jonathan inaugurated a Presidential Task Force on Polio Eradication on Mar. 1 and gave the committee 24 months to eradicate the virus in Nigeria. He announced increased funding for the campaign from 22 million dollars last year to 30 million dollars for 2012.

UNICEF contributed 15.14 million dollars to polio eradication in 2011. The Nigerian federal and state governments have also announced measures to contain the virus and ensure a polio-free nation by the year 2015.

However, Ekunjimi suggests that instead of government increasing funding for the eradication of polio, it should establish primary health centres across the country so that babies receive immunisation against all childhood killer diseases while still small.

“Catch them at infancy at the centres and then continue to immunise those outside through the routine monthly or quarterly immunisation exercises. That way polio will be totally eradicated in Nigeria,” he says.

Professor Oyewole Tomori, a virologist and former vice chancellor of the University of Ibadan, in south western Nigeria, blames leaders at all levels of government for the continued presence of polio in the country. He says that polio can be eradicated within three years if the country’s leaders do the right thing.

Tomori told participants at the 43rd Annual General Meeting and Scientific Conference of the Pediatric Association of Nigeria in mid-February that lack of proper planning and implementation were the bane of government policies in Nigeria.

Radical religious leaders are also to blame for the continued presence of the virus. In 2003, in the northern state of Kano, a Muslim leader opposed a polio immunisation programme, as he claimed that it was a Western plot to make people infertile. Although he later dropped his opposition to it, the damage had been done.

According to reports from the region, most Muslim caregivers still refuse to take their children for the OPV. Meanwhile, UNICEF has deployed a team of volunteer community mobilisers to address the issue there.