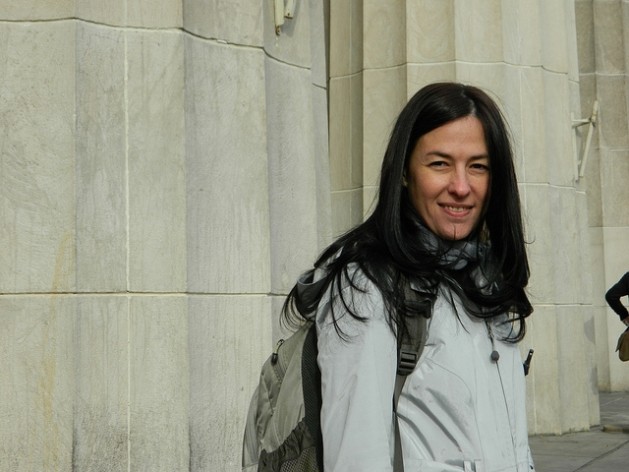 Mariana Matranga outside the School of Engineering at the University of Buenos Aires. Credit: Juan Moseinco/IPS

BUENOS AIRES, Jul 3 2012 (IPS) - The recovery of state control over the oil company YPF was a strategic move for Argentina, which is highly dependent on fossil fuels. But the country needs to incorporate cleaner sources of energy, and this will take time, says energy expert Mariana Matranga in this interview.Today, 90 percent of the country’s energy needs are met with fossil fuels, and this is a reality that cannot be ignored, Matranga said in an interview with Tierramérica *.

“We all like to travel by car, get places quickly, turn on the air conditioning. There are increasingly more things that you can’t do without using batteries… What’s important is that the public realizes that our way of life has a cost,” stressed the chemical engineer and researcher at the University of Buenos Aires, who has worked in the hydrocarbons sector in Argentina, Bolivia, Canada and Norway.

Q: What do you think about the decision to nationalize YPF?

A: I agree with it. It was necessary. It will give the state a very effective tool to act on an energy mix which, whether we like it or not, is currently dominated by fossil fuels.

Q: Do you think this greater state participation will be strategic?

A: Yes, because it affects all aspects of life. Energy consumption is not an end itself, it is a means. This decision wasn’t made thinking about the profits to be made from a commodity, but rather about the common good. Energy is what keeps the economy functioning. That means the whole sector is strategic. Today Argentina depends on fossil fuels for 90 percent of its energy needs. I don’t want fossil fuels to be strategic, I would love it if they weren’t, but the reality is that they are.

Q: And what can be done to change that reality?

A: It’s a reality that has to be corrected while it continues functioning. Changing the energy mix entails engineering works that take time and money. The energy mix is an inertial system. It is very difficult to change it. The way to work on it is through a strategic long-term plan.

Q: Is this something a government can do?

A: A government has to deal with the present situation. It has to keep the machine running and at the same time work on a plan to modify this situation. It’s not simple, and it can’t be done overnight. We have machines from the 1970s that are still within their useful life spans and with good maintenance they can continue to be used in thermal power plants. An investment in energy is for 40 or 50 years.

Q: What do you think about the debate on energy use that was triggered in Argentina by the nationalization of YPF?

A: What’s important is that the public realizes that our way of life has a cost. Even the cleanest energy has an impact. A wind farm in the middle of the route of migratory birds has an impact.

We all like to travel by car, get places quickly, turn on the air conditioning. There are increasingly more things that you can’t do without using batteries. We demand increasingly more energy. Nobody likes to be told that they have to consume less energy or lower their standard of living to make it more environmentally friendly. Since man discovered fire there have been impacts, and these impacts will be greater if there is a growth in demand.

Q: So how can more alternative energy sources be incorporated?

A: The technologies with the least impact are the ones that require the greatest initial investment, which means that compromise solutions have to be adopted. If you ask me, I’d love it if all energy were renewable. But I don’t think that’s possible. Governments try to maintain a balance and make compromise decisions.

Q: Do you think the planned exploitation of unconventional gas and oil will increase dependence on fossil fuels even more?

A: Fossil fuels are not renewable, and their production is likely to decline within a short time. Unconventional fuels will begin to be seen in five years. So this doesn’t necessarily imply an expansion in fossil fuel use, but rather the maintenance of the current proportion.

Q: And the environmental cost of unconventional fuels?

A: It depends on how it’s done. Unconventional technology has only been in use for a short time in the world. It uses a significant amount of water, and while 90 percent goes up in steam, the whole watershed needs to be monitored very carefully. It can be done well or it can be done badly. A lot depends on how much is invested.

Q: Are there international studies on the impacts of this type of exploitation?

A: It’s banned in France. But they have an energy mix dominated by nuclear energy, which can’t easily be changed. It’s in the United States and Canada, where there are significant potential reserves for unconventional extraction, where most of the concerns have been raised.

In Texas and Pennsylvania they are exploiting reserves that are in agricultural areas and are densely populated. On the other hand, in New York, they placed a moratorium on hydraulic fracturing for shale gas until its impacts could be determined. This shows how new all of this is and how little is known. In the United States, the results of an impact assessment will be released in September.

Q: Do you think that there are major risks involved in this area?

A: The final disposal of the treated water is an important factor. It contains the chemicals used in the fracturing as well as those that are washed up from the reserves. But treating this water has its costs. It can be done well, but it is expensive. That’s why regulation is so important. The more that is invested, the lower the risk.

But the risk is always there. You have to decide whether or not you want to take it. These are political decisions. I don’t think it would be very intelligent if this is the only thing we do. In Argentina, unconventional fuel exploitation might be sensible in the short or medium term. But in the long run, we have to increase consumption of other energies and reduce the weight of hydrocarbons.