From the Field to the Rubbish Heap 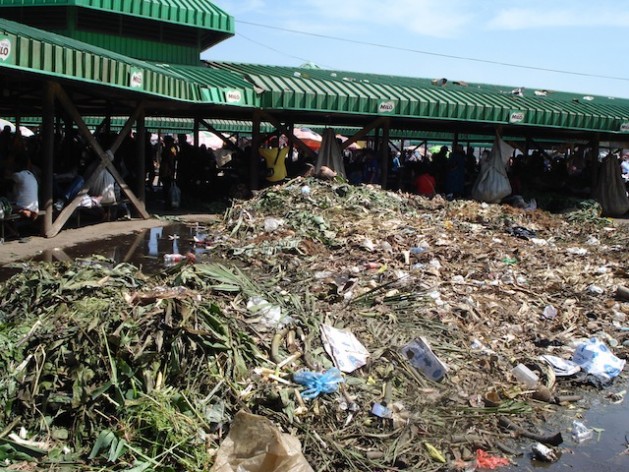 PORT MORESBY, Aug 13 2012 (IPS) - Agriculture provides a livelihood to the majority of the population in Papua New Guinea, a developing island nation of approximately seven million in the south west Pacific.  However, the loss and waste of an estimated half of all fresh produce between harvesting and marketing is threatening improvements to food security and local incomes.

Yer Kirul, a fresh produce grower and vendor at Gordon’s food market in the capital, Port Moresby, told IPS, “We sell our produce, but not always all of it.  What isn’t sold is either given to street vendors at the end of the day or thrown away. There is a lot of waste.”

Papua New Guinea is located close to the equator and Kirul does not have access to storage facilities for his perishable fruit and vegetables in the year-round heat and humidity.

According to a survey conducted by the Fresh Produce Development Agency (FPDA), which is working to develop a sustainable commercial food industry, only 13 percent of farmers in nearby Central Province had sold produce to buyers with cool room facilities.

“We also need better marketing,” Kirul added. “People are buying small quantities. We would like to sell larger quantities to buyers.”

The United Nations Food and Agriculture Organisation (FAO) reports that one third of food produced globally for human consumption, amounting to 1.3 billion tonnes annually, is wasted through loss or disposal. Wider ramifications include the waste of water, energy and resources used in food production.

Most food waste occurs in the industrialised world where 40 percent is discarded by retailers and consumers.  But in developing and low income countries 40 percent of food loss occurs after harvesting, due to factors like premature harvesting and lack of infrastructure, processing, storage facilities and marketing.

The FPDA reports that up to 50 percent of food produced in Papua New Guinea is lost in the post-harvest phase. The agency says quality is a critical issue, with a significant proportion of fresh food not meeting the standards of large buyers and wholesalers, often resulting in produce being sold at negligible prices or thrown away.

Nalau Bingeding, Research Fellow at the National Research Institute, told IPS, “Poor roads and transport infrastructure are a big issue in regard to post-harvest selling in Papua New Guinea.  A lot of garden food is produced in rural areas, but due to lack of roads and markets for the produce the food is either wasted or fed to livestock.”

In rural and peri-urban areas of Papua New Guinea, small farmers cultivating a range of crops including potatoes, broccoli, carrots, tomatoes, taros, yams, mangoes and pawpaws are often both the growers and marketers.

Back in 2008, the FPDA conducted a socio-economic study of 175 male and 160 female farmers, with an average age of 39 years, from six provinces. It revealed that 73 percent believed the most significant issue in selling their yield was difficult transport and road conditions, 43 percent identified oversupply conditions associated with low market capacity, 22 percent named low prices and 21 percent cited waste.

In Papua New Guinea difficult mountainous terrain, weak public service delivery and mismanagement of public funds has impeded the development of an effective national road network. Thus travel between main urban centres such as Port Moresby on the south coast, Popondetta in the north east and Wewak on the north coast is only possible by ship or aircraft. Air services throughout the country cater for this demand, but are very expensive.

The Department of Works reports that only 2,609 kilometres of a total road network comprising 8,738 kilometres is rated in good condition and 64 percent of all national roads are unsealed.

The most extensive main road is the Highlands Highway, which is 800 kilometres long and connects Enga and Hela Provinces in the west of the country to Lae in Morobe Province on the east coast.

Challenges for truck drivers and transport companies include severe physical deterioration of the road surface and armed hold-ups and vandalism by rural gangs along the highway’s route.

According to the FPDA, 85 percent of farmers surveyed in Papua New Guinea used local buses to transport their harvest to market with only four percent owning their own vehicle.

In Papua New Guinea, the Government’s Development Strategic Plan (2010-2030) includes targets to rehabilitate existing road infrastructure and triple the road network to 25,000 kilometres within the next 18 years. But attaining this goal will depend on the government’s success with funding and implementation.

Meanwhile the FPDA, according to a spokesperson, is currently focussed on developing the domestic market with many of the country’s food producers not yet ready to supply an overseas market.

At present, many growers have limited and insecure business relationships with buyers and wholesalers. One successful FPDA initiative is the provision of market information to farmers by mobile phone.

Advancing the food processing industry in Papua New Guinea would also reduce the rate of waste.

“Papua New Guineans lack knowledge to preserve most food crops after harvest resulting in food being wasted because it cannot be stored longer in an unprocessed form without refrigeration,” Bingeding told IPS. “What is needed is to transform sweet potato and taro into other forms, for example, taro or sweet potato noodles or flour, to prolong their shelf life.”