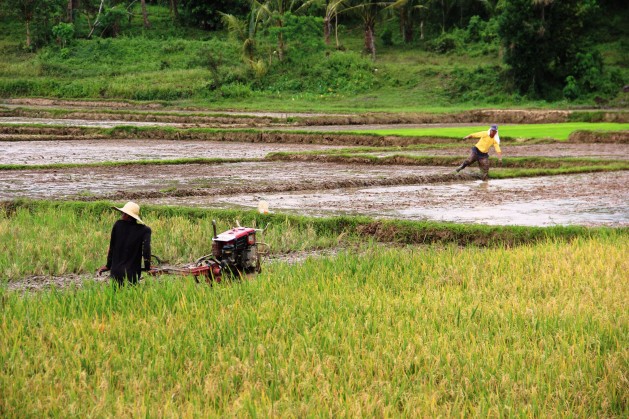 MANILA, Aug 27 2012 (IPS) - This year’s floods, one of the worst in Philippine history, destroyed a staggering 57 million dollars worth of crops, pushing  this climate vulnerable country to implement disaster risk reduction measures.

“We used to schedule our harvest season around the wet and dry months. But now you can never tell,” says Teresita Duque, a rice farmer in the Nueva Ecija province of the Central Luzon region, the ‘rice granary’ of the Philippines.

“The sky suddenly darkens, and the rains just fall,” Duque, who uses native rice varieties and eco-fertiliser on her farm, told IPS in an interview in Manila.

Monsoon rains enhanced by Typhoon Haikui near China had already been drenching Luzon, the Philippines’ main island, for several days when, from Aug. 6-7, nearly two months worth of rain fell on Metro Manila and several provinces in Luzon.

At least 95 people perished in the ensuing floods and landslides, with nearly a million others forced to evacuate their homes.

As the Philippines tries to emerge from years of agricultural backwardness and attain food self-sufficiency, farmers, non-government organisations (NGOs) and government agencies are trying to map out strategies that can mitigate the effects of weather patterns gone wild.

Scientists at the International Rice Research Institute (IRRI), a non-profit agricultural research centre based in Los Banos, Laguna, believe that a flood resistant variety of rice, dubbed ‘submarino’ for its ability to withstand two weeks of submergence, could be one answer.

Last year, when typhoons Nessat and Nalgae devastated Central Luzon, farmers who had planted ‘submarino’ were able to harvest their crops even after their paddies had been submerged for nearly a week.

Glenn Gregorio, senior scientist and plant breeder at IRRI, told IPS that several ‘climate-change ready’ rice varieties, including drought-resistant varieties, are being developed at the institute.

“When you talk about floods in the country, you often see images of urban areas with cars floating and people stranded on their rooftops, but the farmers are really the worst affected,” Gregorio told IPS in a telephone interview.

The farmers’ group ‘Sarilaya’ agrees that while agriculture in the Philippines needs to adapt to climate change, it is best to stick to naturally resilient native varieties rather than go in for hybrids developed in laboratories.

Sarilaya workers say that hybrid varieties are dependent on expensive chemical-based fertilisers which, in the long run, ruin the soil and harm the health of farmers and communities.

“Extreme weather patterns are making the agricultural sector more vulnerable than ever before,” said Pangging Santos, advocacy officer at Sarilaya that works to empower farmers like Duque. “What used to be considered normal is no longer normal.”

Sarilaya runs a farming school and model eco-farms in Northern Luzon where farmers learn how to make their own organic fertiliser. Farmers are taught to make pesticides from locally available ingredients instead of buying costly chemical-based insecticides and sprays.

Duque said where she used to spend at least 223 dollars on farm inputs for one cropping, she now spends less than 16 dollars, mostly on organic fertiliser and pesticides.

“We need to change our mindsets about climate change strategies and look at long-term sustainability,” said Santos.

Sarilaya’s strategy of promoting organic farming is in line with the United Nations Food and Agriculture Organisation (FAO)’s vision of ‘climate-smart agriculture’.

Hideki Kanamaru of the Climate, Energy and Tenure Division of the FAO says climate-smart agriculture is about sustainably increasing productivity. It is also about adaptation and mitigation by reducing greenhouse gases from agricultural production without compromising on food security.

Kanamaru introduced FAO’s vision during a symposium held in February by the Philippines department of agriculture, which was attended by policy makers, scientists and practitioners from the Asia Pacific Economic Cooperation nations and select organisations.

The essence of FAO’s climate-smart farming is careful use of natural resources such as land, water, soil and genetic material as well as good practices that include conservation agriculture, integrated pest management, agro-forestry and sustainable diets.

While the government is providing free rice seeds and crop insurance to farmers in Luzon – where crops have been severely damaged by floodwaters and heavy rains – the country’s climate change commission admits that it may be too late to meet this year’s rice harvest targets.

In 2010, the Philippines topped the list of rice importers when it bought up 2.5 million tonnes of rice. While determined efforts towards self-sufficiency have brought the figure down to 860,000 tonness in 2011, plans to drop imports further have gone awry.

The national climate change action plan says that sensitivity to weather fluctuations “will greatly affect the country’s production and have a domino effect on our target of self-sufficiency by 2013.”

The plan notes: “The Philippines, being archipelagic and because of its location, is one of the most vulnerable to the impacts of climate change…ranking highest in the world in terms of vulnerability to tropical cyclone occurrence.”

When President Benigno S. Aquino III signed into law the People’s Survival Fund (PSF), on Aug. 17, by amending the Climate Change Act of 2009, it was not a moment too soon.

“As we have seen clearly over the past few weeks, there is a pressing need to financially support disaster prevention efforts of local government units,” said Senator Loren Legarda, the driving force behind the 2009 law, at the launch of the PSF.

Worth 23 million dollars annually, the PSF will finance adaptation programmes and projects based on the National Strategic Framework on Climate Change. The fund may be augmented by donations, endowments, grants and contributions.

“The signing of the law signifies the president’s commitment to better prepare the country for erratic weather patterns and climate change,” said Elpidio Peria, convenor of Aksyon Klima, a coalition of 40 civil society organisations working on climate change.