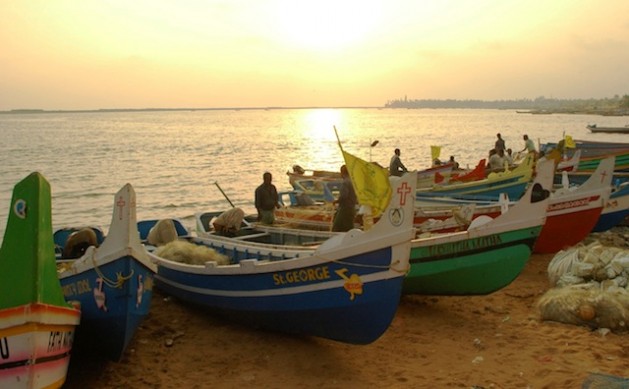 Fishermen dock their boats on a thin strip of sand at Kollam, in Kerala state of south India. Credit: Max Martin/IPS

NEW DELHI, Aug 3 2012 (IPS) - Far-flung South Asian communities, from the high Himalayan slopes to the Indian Ocean coasts, united in the face of extreme and uncertain weather, continue to hold on to the hope that the Rio+20 focus on disaster risk reduction (DRR) will positively influence national policies.

“There is hope in India, the biggest country in the region, that the final statement at the Rio+20 summit titled ‘The Future We Want’ gets translated into national policy before it is too late,” Vinod Chandra Menon, former member of India’s National Disaster Management Authority, told IPS.

Menon, now disaster management consultant to several international bodies, said the current severe drought in South Asia, caused by the failure of this year’s monsoon, should compel policy makers in the region to “walk the Rio+20 talk” and recognise that man-made activities are contributing to climate change.

“For decades there have been warnings that reckless extraction of groundwater was not only lowering the water table drastically but also disturbing the sensitive rain cycle of precipitation, condensation and recharge with serious consequences for rain-fed agriculture,” Menon said.

“It is not far-fetched to say that agricultural distress, marked by the spectacle of farmers committing suicide by the tens of thousands, is the result of an inability to translate climate change knowledge into policy,” Menon said.

According to G. Padmanabhan, emergency analyst and officer-in-charge of the disaster management unit at the United Nations Development Programme (UNDP) in New Delhi, the Rio+20 statement’s value lies in the call for “a renewed sense of urgency” and “adequate, timely and predictable resources” to build resilient communities.

“South Asia is exposed to a variety of hydro-meteorological hazards, and is high on the priority list for risk reduction measures, especially in the context of climate change,” Padmanabhan  said, adding that the DDR call has special relevance for South Asia.

The statement favoured integration of DRR with sustainable development policies and planning, strengthening of institutions and better preparedness, warning, response and recovery. It also stressed the importance of integrating DRR with climate change adaptation.

“Rather than merely focusing on mitigation and its physical aspects, Rio+ 20 invited countries to build resilience through a more holistic approach,” Padmanabhan told IPS.

Such an approach is backed by scientific perceptions.

A 2011 report of the UN climate panel — The IPCC Special Report on Managing the Risks of Extreme Events and Disasters to Advance Climate Change Adaptation (SREX) — noted that climate extremes and even a series of non-extreme events threaten people’s lives and livelihoods, making communities vulnerable and exposed to greater risks.

“A changing climate leads to changes in the frequency, intensity, spatial extent and duration of weather and climate extremes, and can result in unprecedented extremes,” noted a 2012 Climate & Development Knowledge Network (CDKN) report summarising SREX with an Asian perspective.

“Even without taking climate change into account, disaster risk will continue to increase in many countries as more vulnerable people and assets are exposed to weather extremes. In absolute terms, for example, Asia already has more than 90 percent of the global population exposed to tropical cyclones.”

The Climate Risk Index (CRI) 2012 compiled by the charity Germanwatch termed Bangladesh and Myanmar — along with Honduras — as “most affected” by extreme weather during 1991-2010.

For 2010, Pakistan topped the list due to a severe flood.

A 2010 study covering 15 districts of Bhutan, India, and Nepal suggested that communities perceive a decrease in annual precipitation and resultant increase in the intensity of dry spells.

The communities also reported an increase in erratic rainfall patterns and heavy showers when it does rain, Dhrupad Choudhury, the programme coordinator, told IPS. They also found winters warmer with reduced snowfall.

The Rio+20 ‘Future’ document talked about such changes in different geographies. As deforestation, forest degradation, glacier retreat and natural disasters hit the mountains, it called for collaborative efforts to achieve conservation, food security and poverty alleviation.

“The text provides rationale for action,” David Molden, director general of ICIMOD, told IPS. “Mountains are home to only 12 percent of the word’s population; but 40 percent indirectly depend on them for water, hydroelectricity, timber, biodiversity and niche products, mineral resources, recreation, and flood control.”

Professor Saleemul Huq at the International Centre for Climate Change and Development in Dhaka, added, “The Rio+20 outcome on green economy holds promise for Bangladesh as it will enable the country to develop its own green development pathway.”

The green economy concept values nature and environmental services and promotes technologies that address the root cause of climate change – global warming due to too much fossil fuel burning.

Mizanur Rahman, programme officer of Islamic Relief Worldwide in Dhaka, said Rio+20 favours a top-down, government-oriented approach and it works. “For countries like Bangladesh, strengthening people’s capacity is also very important, but unfortunately it has not been highlighted.”

Speaking over telephone from Thiruvananthapuram, Kerala state, T.  Peter, the secretary of the National Fishworkers Forum, which represents the interests of artisanal fishers, told IPS, “Getting money, under green economy or climate adaptation initiatives, is not important – but how it is spent for the safety and wellbeing of marginal people like us is.”

Peter and his colleagues are actively resisting displacement of fishers for conservation, development and DRR initiatives.

In the south Indian technology hub of Bangalore, Prof. J Srinivasan, chairperson of the Divecha Centre for Climate Change at the Indian Institute of Science, echoed the scepticism of the global green lobby. He said when the industrialised West is excused from responsibility, all other efforts naturally become weak.

“The biggest bottleneck,” Huq said, “is the reluctance of global leaders to realise that the current economic growth paradigm is unsustainable and needs to be pointed down a more sustainable pathway.”

*Max Martin contributed to this report.