UNITED NATIONS, Sep 26 2012 (IPS) - Following a lukewarm outcome of the Rio+20 sustainable development negotiations in June, U.N. Secretary-General Ban Ki-moon is moving full-steam ahead on a new initiative aimed at leveraging public-private partnerships to bring modern energy to over one billion people by 2030. 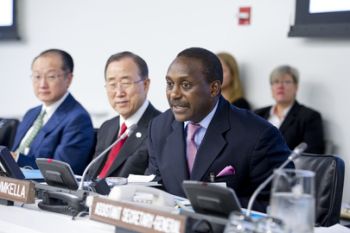 Under the moniker Sustainable Energy for All, the new initiative aims to establish universal access to modern energy, double the share of renewable energy worldwide and double the rate of improving energy efficiency over the next two decades.

“Our goals are ambitious,” Ban told country leaders during a high-level discussion on the initiative taking place on the sidelines of the 67th General Assembly in New York on Monday.

In all, the effort will target the approximately 1.3 billion people currently living without access to electricity, 95 percent of whom reside in sub-Saharan Africa and developing Asia.

“We have come a long way, but we have a long road ahead,” the U.N. chief said, referring to gains made since the launch of the initiative last year, which have surpassed expectations for 2012, according to Ban.

So far, over 60 developing countries have signed on to the initiative and upward of 50 billion dollars have been committed by businesses and investors for the global effort that aims to entice the private sector to invest heavily in energy solutions by partnering with public and philanthropic institutions to mitigate investment risks.

In order to provide universal energy access by 2030, investment of 48 billion dollars per year will be needed, according to a vision statement by the secretary-general released at the launch of the initiative.

While that number sounds large – it is five times the investment brought together for expanding energy access in 2009 – it’s only three percent of total global energy investment, according to the statement.

To give permanent leadership to the initiative, Ban on Monday appointed Kandeh Yumkella, current director-general of the United Nations Industrial Development Organization (UNIDO), as new special representative and CEO of the effort.

In addition, the Secretary-General himself and World Bank President Jim Yong Kim will co-chair a new board to provide strategic guidance, Ban told assembled dignitaries.

Kim called access to energy crucial for economic growth and poverty eradication, referring to both as “the problems of our time”.

Yumkella’s first goal as full-time captain of the initiative is to utilise its 30-member board to grow the existing coalition of partners, including governments, private sector and civil society, the special representative told IPS.

The initiative will have a “solid private sector approach … with clear milestones and meetings every six months,” according to Yumkella, who says the board is particularly zeroing in on current barriers to private investment.

At the same time, he aims to build “a network of networks” for sustainable energy finance that builds on proven strategies.

Developing countries came out in strong support of the initiative on Monday, but also reminded assembled leaders of the unequal burden falling on them to deal with the effects of climate change.

“We are the countries who contribute least to greenhouse emission and are yet hit by it hardest,” the permanent representative of Swaziland said on Monday. “We therefor appeal to our developed partners for support.”

Affected by the global economic crisis, Swaziland is struggling to meet food needs while also trying to grow a green economy.

While the initiative will provide both financial and technical support to countries developing their energy sector, Yumkulla underlined that “this is not an aid model” but one in which donors commit their money to leverage private capital for energy projects.

As partner institution, the World Bank, in June, committed to doubling its energy investment to 18 billion a year, with an emphasis on low-carbon energy.

The African Development Bank aims to invest 20 billion in energy by 2020, which it thinks will leverage 80 billion dollars in partnerships.

The European Bank for Reconstruction and Development, meanwhile, is throwing eight billion dollars at the issue over the next three years.

On the private side, Bank of America has will invest approximately 35 billion dollars into renewable energy, efficiency and access over the next 10 years.

Chairman of Bank of America Corp. Charles Holliday – who saw the initiative through its first year – will continue as chairman of its new executive committee.

Women to benefit most

As women make up two-thirds of the world’s poor, lack of energy access causes an unequal drain on women’s time and opportunities, according to Sheila Oparaocha, coordinator of Energia International, a network on gender and sustainable energy that’s a partner to the initiative.

Yet, “across the board, we find that existing energy policies don’t address women and the poor,” Oparaocha told IPS.

Energy solutions ought to target cooking needs and small-scale businesses, she said, adding that real participation of women in energy decision-making is crucial for better governance of the energy sector as a whole.

Hopes for increased government investments in a comprehensive sustainable development agenda were shattered in June when Northern governments – mired in a global financial crisis – barely agreed to reaffirm their commitments made 20 years ago.

The secretary-general’s sustainable energy initiative is now focusing on what many post-Rio perceive as the only viable alternative to bridging the finance gap for sustainable development initiatives: leveraging private investment for social good.

About 100 companies and institutions have so far signed onto the initiative – one of the initiative’s biggest achievements to date, Yumkella says.

The other is Monday’s high-level discussions itself – “getting diplomats and world leaders together in New York, and there is no talk about oil and gas but energy for development.”

As a cross-cutting issue, energy solutions influence all of the Millennium Development Goals world leaders are struggling to accomplish by 2015.