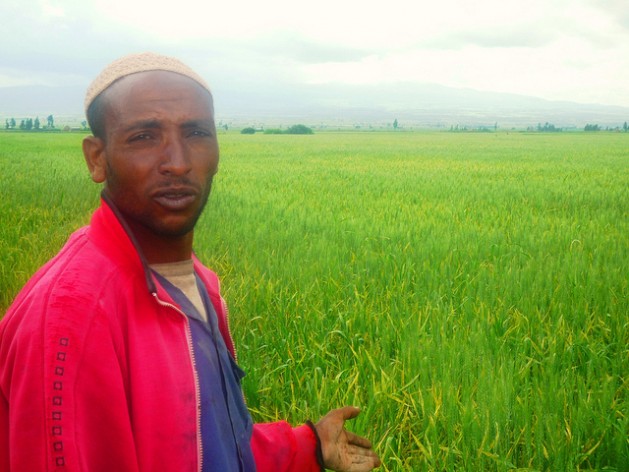 Jundi Hajji is a wheat farmer in Ethiopia. Experts say that Africa could become a food basket to the world for a number of crops, in addition to wheat./ Credit:Omer Redi/IPS

ADDIS ABABA, Oct 11 2012 (IPS) - Africa can ensure food security by producing wheat. New research presented in Addis Ababa, Ethiopia this week shows that the continent has the potential to be self-sufficient.

The demand for wheat is growing faster than for any other crop, according to statistics of the International Maize and Wheat Improvement Center (CIMMYT). Researchers are looking into the possibility of making Africa a major wheat producer, as the continent is the biggest wheat importer worldwide. It is expected that this year alone, Africa will spend 12 billion dollars on importing 40 million tonnes of wheat.

Researchers at the CIMMYT Wheat for Food Security Conference being held in Addis Ababa from Oct. 8 to 12 say more production on the continent and fewer imports will eventually ensure increased food security for Sub-Saharan Africa.

In particular, farmers in communities which are reliant on rain-fed agriculture have the potential to expand wheat production. This could contribute to ensuring food security, as less money will be spent on importing foodstuffs.

A report released at the conference focused on 12 countries on the African continent where wheat is traditionally produced. The study was done in Angola, Burundi, Democratic Republic of Congo, Ethiopia, Kenya, Madagascar, Mozambique, Rwanda, Tanzania, Uganda, Zambia and Zimbabwe.

These countries have enough natural rainfall for the yields required to become self-sustaining. The study showed that 20 to 100 percent of the farmland in these countries is suitable for profitable wheat farming.

Nicole Mason, assistant professor of International Development in the Department of Agricultural, Food and Resource Economics at Michigan State University, and a keynote speaker at the conference, told IPS that there are several factors driving up demand for wheat.

Wheat, primarily in the form of bread, pasta and cereals, is the number two staple crop in the developing world. It is also a primary source for protein in most third world countries. While maize currently holds the top position, the demand for wheat is rapidly growing in Sub-Saharan Africa.

“We mainly find improved affordability of wheat products, population growth and rising incomes are key drivers. Urban consumers tend to spend more on wheat than rural ones, so rapid urbanisation in Africa might be another key factor.”

The changing lifestyle of African women also has had a significant impact on the demand for wheat, said Mason. “As women are working more outside of their home, they have less time to prepare food and they seek convenience foods that are quicker to prepare. Bread and pasta are key convenience foods.”

As urbanisation is one of the key factors behind the increasing demand, alternatives need to be investigated in order to cope with expected urban population growth of 300 percent in Africa in the coming 40 years.

If farmers in the region increased their production by 10 to 25 percent, it would be economically profitable according to researchers from the CIMMYT.

Hans-Joachim Braun, the director of the Global Wheat Program at the CIMMYT, told IPS that Africa is the biggest importer of wheat in the world and that it has the potential to produce what it consumes.

“Africa is very favourable for a lot of crop production, but what is missing are water and fertiliser,” he said.

Investments in seed and technology are needed to turn African into a self-sustaining wheat producer. He explained that if water, including dams for irrigation, and fertilisers were provided, Africa could become a food basket to the world for a number of crops, in addition to wheat.

But more changes are needed if Africa ever wants to reach that goal. Tariffs on imports create difficulties in the agricultural sector. Many of the issues the sector faces in becoming a major wheat producer have to do with the policies of the sector itself, said Braun. “These issues need to be changed and they have a lot to do with policy. Because the yields are extremely low in Africa, also for other crops.”

Many African countries used to produce wheat on a larger scale until the 1980s. Because of the tonnes of food aid that was donated during this period of time, international prices declined sharply.

Smallholder farmers in most Sub-Saharan African countries do the majority of agricultural production. Braun pointed out that these farmers often need better varieties and access to seeds to make wheat production truly viable. But he added that this is just the technical part, while the infrastructural component is equally important: “It also needs to be ensured that the wheat can be processed and reach the end users as well.”

Poverty reduction can be a positive side effect in the long run for smallholder farmers producing wheat, said Mason. She told IPS that “if the product of the small scale farmers is demanded by urban people, they will earn more money and that will help to reduce poverty.”

Braun believes African farmers have to be shown that there is a significant market for their products, without pushing wheat into Africa or on to the farmers: “What counts is what is in their pockets, to provide them with an alternative with a higher income.”