WASHINGTON, Oct 15 2012 (IPS) - Tobacco use led to almost six million deaths in 2011, according to new research released here on Monday, of which nearly 80 percent were in low- and middle-income countries. 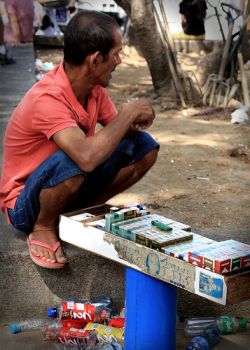 Philippine cigarettes are among the cheapest in the world, costing less than one U.S. dollar for a pack of 20. They are available right outside schools, in parks, in streets and other public places, and sold by vendors in single sticks for about two pesos. Credit: Kara Santos/IPS

Such trends, fuelled by tobacco industry tactics, are having a “devastating” impact on the global economy, health and development workers warned at the Washington launch of a new report tracking tobacco use worldwide. The findings are the results of nascent research into the links between development, economic growth and tobacco use.

“We have more and more data on these links,” Hana Ross, one of the lead authors of the new Tobacco Atlas, told IPS. “For instance, it appears that in Russia, gross domestic product would have grown by 1.0 to 1.5 percent faster over the past three decades if it weren’t for the tobacco-related costs. Once you start to accumulate over time, these numbers become huge.”

The tobacco industry’s products and “spurious legal challenges”, Peter Baldini, the CEO of the World Lung Foundation, said Monday, “hurt economies as much as they hurt people.”

According to the fourth edition of the Tobacco Atlas, put out by the American Cancer Society and the World Lung Foundation, tobacco use is the single most preventable cause of death in the world. It is also the only risk factor common to the four most significant non-communicable diseases, heart disease, cancer, respiratory disease and diabetes.

Several diseases exacerbated by smoking also inordinately affect developing countries. Between 2010 and 2050, for instance, 40 million smokers with tuberculosis are expected to die, with smoking estimated to directly cause 20 percent of all cases of TB worldwide.

“While smoking rates have been slowly declining in the United States and many other high-income nations during the past 25 years,” Baldini and John R. Seffrin, CEO of the American Cancer Society, write in the Atlas’s foreword, “they have been increasing in low-and middle-income nations, which are the least prepared to deal with the effects of tobacco-related disease.”

Overall, a billion people are expected to die due to tobacco use over the course of the 21st century. That figure includes a significant proportion of victims of second-hand smoke, 75 percent of whom are women and children.

The tobacco industry’s role in dragging down health indicators weighs heavily on national and international efforts at strengthening health systems, experts warn. In the United States alone, cigarette smoking has been directly blamed for around 193 billion dollars in annual health-related costs (in 2000-04), half in lost productivity.

With health-care costs already unsustainably high in many Western countries, the future impact of smoking on the developing world is now increasingly worrying those in the development sector.

China is a case in point, not only due to its massive population but also for the uniquely high percentage of the population that smokes. Although the Chinese government, under significant international pressure, has moved to cut down on smoking in recent years, Chinese men, more than 60 percent of whom use tobacco, continue to smoke roughly a third of the world’s cigarettes.

And if Chinese women were to begin smoking at anywhere near that rate, the Atlas’s writers warn, “the country’s economy and health systems will be overwhelmed”.

“The World Bank is greatly concerned about tobacco because … it is increasingly becoming largely a developing world problem at a time when the developing world can least afford to add another health problem,” World Bank official Keith Hansen told journalists Monday. “We need to all have a unified message: Tobacco control is a development issue, and we will not lose revenue by addressing it.”

The World Bank is reportedly looking to begin putting increased focus on tobacco-related research and programming.

“With tobacco now poised to explode in developing countries and addict a new generation,” Hansen says, “urgent action is needed to make sure that these countries are able to put tobacco behind them and not become the centre of tobacco for the 21st century.”

The Atlas was first published a decade ago, in 2002, and over that period significant forward steps have been taken in the fight against tobacco use.

In 2003, the World Health Organisation (WHO) adopted the Framework Convention on Tobacco Control, which now covers 174 countries and more than 87 percent of the global population. The WHO has set a goal of a 40-percent reduction in daily smoking among adults by 2025.

A year ago, in September 2011, the United Nations held its first-ever high-level meeting on non-communicable diseases, where world leaders unanimously agreed to a plan that calls for strengthened international anti-tobacco collaboration.

Despite such steps, today nearly 90 percent of the world’s population remain unprotected by smoking-related legislation. And according to WHO Director-General Margaret Chan, “Measures to tackle the epidemic remain seriously underfunded.”

In fact, funding for tobacco control should have a significant advantage in at least two regards, says Ross, the Atlas’s co-author.

First, it offers national governments a largely untapped opportunity for a massively increased tax base. The WHO itself has recommended that tobacco taxes be placed at around 70 percent of cigarette retail prices, although only five countries have yet reached that target.

“In many cases, this is a simple matter of political will, as control measures are not necessarily expensive – most countries already have some kind of tax system in place,” Ross says. “There is an opportunity for the international community to help in building that political will as well as to offer technical advice for setting up, for instance, efficient taxation systems.”

In this regard, Ross says, positive examples are coming in particular from Southeast Asia, where she highlights new government moves in Thailand, as well as in Laos and Vietnam.

Second, anti-tobacco funding offers something that many such public programmes do not: fast, measurable results.

“If you get people to quit smoking, the impact on health is visible within the first six months,” Ross says. “Results are typically available very quickly, reflected in specific and measurable data. For better or worse, that’s important to both the donor community as well as national policymakers.”