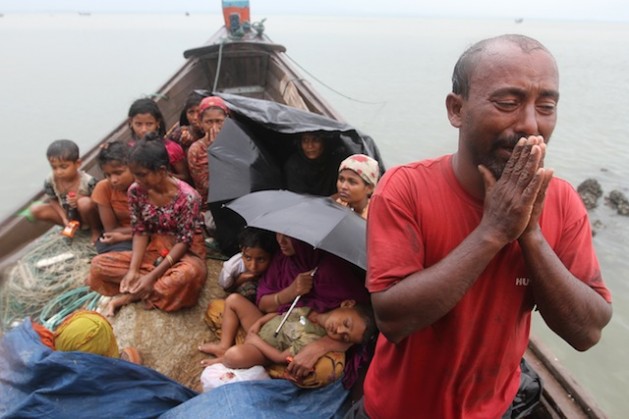 COX'S BAZAR, Bangladesh, Nov 20 2012 (IPS) - In late August, Mohammad Saifuddin (not his real name), together with his wife, three daughters and son, fled the carnage of communal violence in western Myanmar’s Rakhine province and headed for the border of neighbouring Bangladesh.

Horrified by attacks on the minority Rohingya Muslims by the majority Buddhist community this past summer, the Saifuddin family embarked on what they described as a “horrific” five-day-long journey to reach the nearest border town of Teknaf in the Cox’s Bazar district of southeast Bangladesh, some 200 kilometres away.

Six other families accompanied the Saifuddins on a perilous journey that involved crossing the Mayu River and meandering across hilly forests.

“We moved during the night to evade detection. The journey seemed endless with the children unable to continue walking. At times we had no food or water, and were sometimes completely lost,” Ejaz Ahmed, who brought his wife and family across the border, told IPS.

But instead of arriving on safe soil, as they had hoped, the refugees have met strict border control and a hostile local government, highlighting the precariousness of life for this stateless Muslim population in Southeast Asia.

No rest for refugees 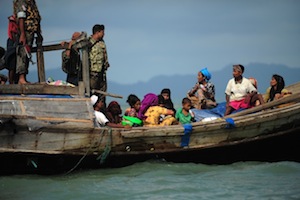 Refugees embark on long, perilous journeys by land and sea, only to be turned away. Credit: Anurup Titu/IPS

Sparked by reports in late May that three Rohingya Muslim men had allegedly raped a Buddhist Rakhine woman, the violence left thousands of families from the farming and fishing villages of Maungdaw, Buthidaung, Kyauktaw, Rathedaung, Minbya and Mrauk U homeless, with no access to food, water, medical supplies or shelter.

Within a month 83,000 out of a population of about 800,000 Rohingyas had fled their ancestral homes in Rakhine. By June, 95 people had been killed.

Some of the survivors now living around the camps in Bangladesh told IPS they had no choice but to flee.

“I saw my neighbours being dragged out of their homes and beaten to death. We fled to escape being killed,” Rehana Begum told IPS.

Mujibor Rahman, a vegetable shop owner in Kyauktaw village, said “On a dark night in June a dozen men attacked our local market where they picked up young Muslim men and (stabbed them) with rapiers. Many died on the spot while others were left moaning on the ground.”

But stories of these “genocide-like” conditions have failed to sway the Bangladeshi government, which has tightened border security at all points of entry.

Authorities have given Border Guards Bangladesh (BGB) strict instructions to deny entry to any “intruder” from Myanmar, whether travelling by boat or on foot.

As a result, scores of Rohingyas are said to be languishing on the other side of the roughly 270-kilometre land border in makeshift camps.

BGB Commander for Cox’s Bazaar, lieutenant colonel Mohammad Khalequzzaman, told IPS that since August over 1,300 Rohingyas were sent back through the Tumbru and Ghundum border points.

In total, some 2,600 Rohingyas have been sent back since the first wave of refugees arrived about four months ago. The Home Ministry in Dhaka estimates that number could rise to nearly 10,000 by early next year.

“We have intensified our patrols around the Naf River”, which forms one of the borders between the two countries, Coast Guard Station Officer Commander Badrudduza told IPS.

Armed BGB members and coast guards in speedboats are patrolling the Naf, searching for refugees. But the vast Bay of Bengal, which lies to the south of Bangladesh and southwest of Myanmar, still facilitates several points of entry for those who arrive in dilapidated wooden boats, mostly at night.

“It’s very dangerous to take such a coastal route. Coast guard troops from both countries often shoot at us,” Mohammad Kalam Hossain, who recently arrived in Teknaf with a group of 26 men, women and children from Ponnagyun, a coastal fishing village in south Rakhine, told IPS.

“In the last two weeks more people fled, fearing fresh attacks. The only safe place for us is Bangladesh,” Mohammad Jahangir Alam, a fisherman from Myebon village, told IPS.

Those who do manage to enter Bangladesh are in perpetual fear of being caught by the intelligence or being reported to the police.

Since they speak the local dialect and bear a strong resemblance to Bangladeshi people, many refugees are able to slip into village and town life undetected.

But once caught, refugees receive “no mercy”. “The authorities will force you to disclose the whereabouts of others, and send (everyone) back. That’s why we try to avoid exposure during the daytime,” Julekha Banu, who escaped to Bangladesh in September, told IPS.

Though the issue is only now receiving front-page coverage in international media, the plight of Rohingya Muslims dates back several decades, ever since the ruling military junta in Myanmar stripped them of their citizenship.

During a 1978 military assault known as the King Dragon Operation, 200,000 Rohingyas were driven from Rakhine State to Bangladesh, where they lived in squalid refugee camps for decades.

A similar purge in 1991-92 sent another 250,000 Myanmar nationals of Rohingya ethnicity streaming across the border.

Though Burmese officials at the time identified those refugees as their own citizens, political leader Aung San Suu Kyi is now referring to the refugees as “illegal immigrants from Bangladesh”, a fact the Foreign Ministry here has vehemently denied.

A Foreign Ministry spokesperson in Dhaka, speaking under condition of anonymity, told IPS that Bangladesh is already stretched to its limit, with two refugee camps, Ukhiya and Kutupalong, housing over 30,000 displaced Rohingyas. An additional 200,000 Rohingyas are estimated to be living in Bangladesh as undocumented immigrants.

This legal quagmire has effectively rendered the Rohingya people ‘stateless’, with limited access to employment, education, healthcare and public services in either country.

Speaking to IPS on the phone from Geneva, the U.N. Special Rapporteur on the situation of human rights in Myanmar, Tomás Ojea Quintana, said, “The situation… is very critical. I am concerned about the Rohingyas who have no homes, food, water or medical care… They require immediate humanitarian aid.”

He added, “Bangladesh should fulfill its obligations under international law by respecting and protecting the human rights of all people within (its) borders, regardless of whether they are recognised as citizens.”

In August Quintana was refused entry into Bangladesh to see the situation here.

Meanwhile, refugees continue to live in limbo, unsure whether they will be allowed to stay or forced to return to a nightmare, which took place “under the nose of the Yangon regime”, according to survivors.

“This is our new home,” a refugee woman in Cox’s Bazar told IPS. “Please let us stay here.”