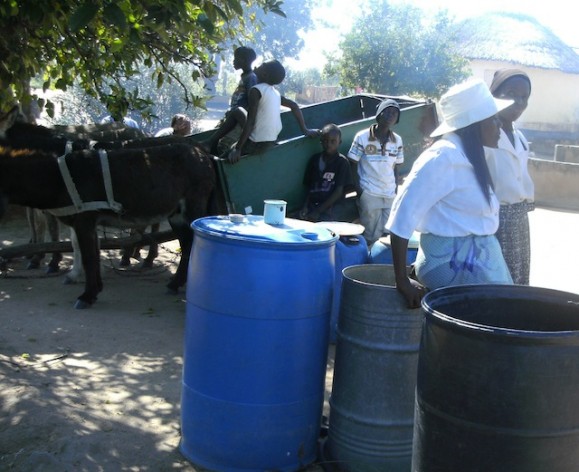 Women and children in Zimbabwe queue for hours to fetch water from boreholes. Credit: Ignatius Banda/IPS

HARARE, Jan 28 2013 (IPS) - For three weeks Tavonga Kwidini and his wife Maria had no tap water in their home in Glen View, one of the many dry suburbs in Zimbabwe’s capital, Harare.

The couple was just about at the end of their tether when heavy rains came like a gift from the heavens.

“We now harvest rainwater and that’s what we use to bathe, drink and flush our toilets,” Kwidini told IPS as he lined up his buckets underneath the roof of his house in anticipation of the January showers.

Such has been his life since the second week of December 2012, which was the last time he had tap water. Surprisingly, he still receives the council water bill averaging around 80 dollars every month.

“Water problems are not new here — in 2008 some of my neighbours died of cholera because of these shortages but the (city) council is not doing anything to make sure that we have safe household water,” according to Kwidini.

In the past the problem was largely blamed on shortages of water treatment chemicals, but for nearly half a decade this excuse has been inadequate, as the United Nations Children’s Fund (UNICEF) provided these chemicals to the country’s 20 urban councils free of charge.

U.N. assistance came in response to Zimbabwe’s 2008 cholera epidemic that killed about 4,000 people. It was not until last April, when local authorities indicated that the situation was under control, that UNICEF discontinued its support, according to UNICEF Chief Communications Officer Micaela Marques de Sousa.

However, experts and locals agree that the current status quo might force the aid agency to rethink its position, given that access to safe water is one of the eight Millennium Development Goals (MDGs), whose 2015 target is fast approaching.

Until the UNICEF Water, Sanitation and Hygiene (WASH) programme withdrew in 2008 the situation had improved visibly, with greater numbers of people in Zimbabwe’s 20 urban centres able to access safe water and sanitation services.

Now it is common to see many people in urban Zimbabwe carrying buckets and walking in search of water, a sight that had hitherto been limited to rural areas.

“We have no option but to move from one area to the next in search of boreholes with clean water. These days we are lucky because of the rains, otherwise I would be carrying a 20-litre bucket to my work place to bring drinking water home,” said Kwidini, who works at a wholesale shop in central Harare.

As with many crises, women and children are shouldering the lion’s share of the burden.

Women who have now resorted to doing their washing in water bodies that are often used as dumping areas by industrial companies are vulnerable to several health hazards.

Meanwhile, children are being forced into the role of “water bearer”.

“My day starts at five a.m. as I join a queue at the local borehole to get bath water for my father, myself and for household use,” fourteen-year-old Thelma told IPS.

Like many of her peers Thelma has to join the long water line early or else she will be late for school.

The number of functioning boreholes is inadequate to service the urban population, and when they break down – a common occurrence – they are often left in a state of disrepair.

A borehole at the Tichagarika Shopping Centre in Glen View suburb, which serviced hundreds of residents, broke down in June last year and remained dormant until its components were stolen.

The government assisted Harare in sinking 250 boreholes across the capital but residents say most of these have either broken down or only provide contaminated water.

According to the Health and Child Welfare Ministry’s disease monitoring report, an estimated 50 typhoid cases are reported each day in Harare and its satellite towns. Roughly 500,000 people in Zimbabwe suffered from diarrhoea in 2012; of these, 460,000 were serious cases and 281 were fatal.

Statistics from an advocacy group, the Harare Residents Trust (HRT), suggest that only 192,000 households in Harare, a city of two million people, are connected to the water system, while the rest depend on boreholes or rainwater.

To make matters worse HRT says the city is losing 60 percent of its treated water to leakages in the old infrastructure. Harare needs 1,300 mega litres of water daily but the current supply per day ranges from 600-700 mega litres, approximately half of the demand.

On top of this, Zimbabwe spends 27 million dollars a month to treat the water supply.

HRT Director Precious Shumba told IPS that the problems facing the city are a sign of local councils’ failure to adequately provide its residents with the most basic services.

“We are most disappointed with the level of service provision — the quality is atrocious and residents are complaining of stomachaches and diarrhoeal diseases like typhoid. Most of the time, the water coming out of taps is smelly and has visible impurities,” said Shumba.

“In areas like Crowborough, Dzivarasekwa and Glen Norah, Budiriro, residents have witnessed sadza (cooked cornmeal) and vegetable particles flowing out of their taps, raising genuine fears of the safety and sustainably of this water for human consumption,” Shumba added.

A recent study from the University of Zimbabwe indicated that one in every 1,000 people in the capital is at risk of developing colon or liver cancer due to continuous consumption of unsafe water pumped from polluted sources.

Christopher Zvobgo, a Harare city engineer, strongly disputed these findings, though he admitted that the city undoubtedly faces water-related challenges.

“We test water on a daily basis and we take samples from different points. Every month we send (the samples) to two independent laboratories for testing and they meet the World Health Organisation (WHO) standard,” he said adding that the biggest problem lies in the aged water infrastructure.

But back in Glen View, residents like Alois Chidoda and his children are forced to rely on boreholes because the water coming out of their tap is “brown in colour” and simply not fit for consumption, he told IPS.

“Using it will be inviting disease,” Chidoda added.