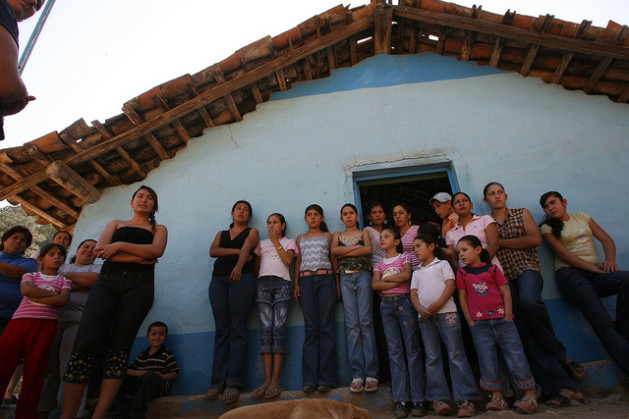 Women and children from the Mexican village where the Esparza family was murdered demand justice outside the schoolhouse. Credit: Mónica González /IPS

WASHINGTON, Apr 19 2013 (IPS) - Development experts here are warning that widespread, unchecked violence against citizens in Latin America is posing a threat to the development of the entire region.

According to a high-level panel of development workers and government officials at the World Bank on Thursday, violence is increasing in the region, at odds with otherwise promising development gains, and that increase poses a real threat to Latin America’s fragile progress.

“Behind Latin America’s economic boom, there is a hidden wave of crime and violence that threatens a decade of progress hurting all citizens, particularly the poorest, who have no way of protecting themselves,” Hasan Tuluy, vice-president of the World Bank for Latin America and the Caribbean, said Thursday.

“I’m afraid that citizen insecurity is becoming the Achilles’ heel of development.”

The World Bank is currently holding its annual Spring Meetings here in Washington, together with the International Monetary Fund (IMF).

At Thursday’s panel discussion, participants referred to an incident in El Salvador a little over a year ago, when the country’s two most powerful gangs called a truce. That single incident led to a 52-percent drop in killings, though only minor decreases in extortion, theft and drugs.

For many, the truce highlighted an extreme example of rampant violence, in which a few criminal groups had essentially supplanted government and neutered the rule of law entirely. In El Salvador, citizens’ rights are in the hands of a corrupt few, and any temporary calm – such as the truce – is a fragile peace.

“When there is [widespread] corruption, when the justice system can’t function … it makes it harder to draw the line between licit and illicit activity,” Joseph Bateman, a programme office at the Washington Office on Latin America (WOLA), an advocacy group here, told IPS.

Experts say that unchecked crime poses a threat to public institutions and civil society, both of which are necessary to democratic growth and economic prosperity.

“Crime has tangible direct costs, such as the cost of funding private and public security infrastructure to prevent and combat crime,” Ana Corbacho, an economic advisor at the Inter-American Development Bank (IDB), told an audience Thursday.

“But the implications of crime on the region’s wellbeing are potentially much greater. Violence not only victimises individuals – it undermines trust in public institutions.”

The relationship between stronger law enforcement and development in Latin America has been the subject of recent development scholarship, which has picked up particularly following a call for proposals from the World Bank on methodologies to measure the cost of crime in the region.

One of the resulting studies found that in Mexico, municipalities with greater levels of violence associated with drug cartels had a 6.8 percent lower rate of electricity consumption – considered a proxy indicator for gross domestic product (GDP) – than did less violent municipalities.

In a study that took into account the opportunity costs for jail time and the cost of stolen goods, scholars found that crime cost Uruguay about 319 million dollars a year.

But the ripple effects of widespread crime stretch far beyond the immediate damage.

Another of the World Bank-commissioned studies found that incarcerated youths were 15 percent less likely to have access to formal education, undercutting an otherwise growing trend of expanding educational access in the region.

More attention is also being focused on the effects of gender violence on early infant health and nutrition. Women in abusive households, for instance, are more likely to give birth to underweight children, and children of domestic abuse victims are more likely to grow up with feeble health.

Thursday’s panel emphasised the need for a broader framework for approaching the issue of citizen insecurity, a term that itself implies a move from a focus on criminal justice and law enforcement to crime prevention.

“There was a time when the reaction to increased violence was increased law enforcement,” Pablo Bachelet, a senior communications officer for the Inter-American Development Bank, a Washington-based multilateral donor, told IPS.

Bachelet cited the example of what is known as Pacifying Police Units, a law enforcement and social services programme that was pioneered in Brazil in 2008. The units cleared out gang leaders as well as gang weapon and drug stashes in Rio de Janeiro’s most crime-laden neighbourhoods.

That process was then followed up immediately with the coordination of public agencies, NGOs and the private sector to meet the social needs of the community in the vacuum that followed, in order to ensure that the drop in violence was sustainable.

Mauricio Funes, the president of El Salvador and a keynote speaker at Thursday’s World Bank event, laid out the key components of these integrated approaches, looking to a reform initiative already underway in the small country that is yielding slow but steady results.

“There is no single response to [this] challenge, but we can find a way out of this labyrinth of insecurity,” President Funes said Thursday. “Reducing crime and ensuring justice will be the main tasks of our time.”