Chile is home to 20 percent of the world’s active volcanoes, according to the Andean Geothermal Centre of Excellence. 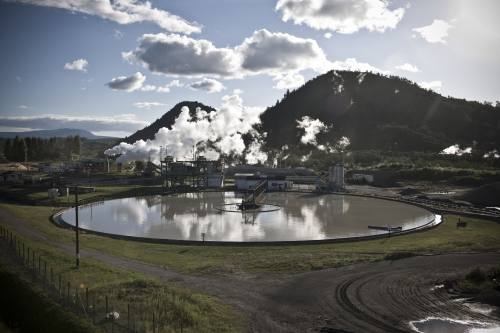 SANTIAGO, May 8 2013 (IPS) - Chile is one of the countries with the greatest potential for geothermal energy development in Latin America, but a lack of incentives for investment in the sector has kept it from moving past the exploratory phase. A strategic partnership with New Zealand aims to change that situation.

Geothermal energy is the heat energy from deep inside the Earth, which is brought to the near surface by thermal conduction and in some areas rises to the surface in natural streams of hot water or steam. This steam can be harnessed to power a turbine and generate electricity.

This long, narrow South American country stretches 4,270 kilometres along the slopes of the Andes Mountains, the world’s longest volcanic chain, according to the Andean Geothermal Centre of Excellence at the University of Chile.

Ten percent of all of the world’s volcanoes are found in Chile, “which represents significant potential in geological terms,” Gonzalo Salgado of the Chilean Geothermal Energy Association (ACHEGEO) told Tierramérica.

Chile forms part of the Pacific Ring of Fire, a belt of volcanoes and earthquake epicentres that in the Americas also encompasses Peru, Ecuador, Colombia, Central America, Mexico and parts of Argentina, Bolivia, the United States and Canada. This belt contains numerous virgin territories for thermal energy exploration, said Salgado.

Geothermal energy offers a means of achieving greater energy self-sufficiency in Chile, which currently depends on imports for 70 percent of its energy needs.

“The solutions (for energy dependency) are numerous: we need to talk about energy efficiency and many other things, but obviously, geothermal power is one of the inputs that could help to solve this problem,” Salgado added.

According to a report from the Renewable Energies Centre of the Ministry of Energy, in 2012 non-conventional renewable energy sources represented five percent of the country’s total installed capacity for electricity production.

By comparison, renewable energy sources accounted for 77 percent of the electrical power supply in New Zealand in 2011.

The Chilean government currently aims to reach a 10 percent renewable energy share by 2024, although a bill is currently under discussion in Congress that would raise this target to 15 or 20 percent.

Chile was a pioneer in studying its geothermal potential. The first exploration was conducted in 1907 in El Tatio, a geyser field in the north of the country, and two wells were drilled in the area in 1931.

In the late 1960s, with the support of international financing, the government embarked on more systematic exploration in El Tatio, but these activities were eventually suspended.

In 2008, the Geotérmica del Norte consortium launched exploration activities in the Zoquete ravine, a few kilometres from El Tatio.

In September of the following year, a 60-metre plume of steam erupted from one of the wells drilled by the consortium to extract and re-inject geothermal fluids in order to evaluate the area’s potential for energy generation. This anomaly, which continued for more than three weeks, led the government to revoke the permit for these operations.

Despite the alarm that this incident caused among the public, which had begun to show interest in geothermal energy, Salgado maintains that it “did not affect the development” of this energy source in Chile.

Luis Mariano Rendón, director of Acción Ecológica, an environmental organisation, told Tierramérica that while all power generation has harmful effects, “geothermal energy is a relatively low-impact source of power generation” that Chile should pursue. The most pertinent factor would be the availability of water, which could limit its use in arid regions of the country, he noted.

Studies by the University of Chile estimate that the country could generate 16,000 megawatts (MW) of geothermal power, while the installed capacity for electricity production is 16,970 MW and the maximum demand is around 9,000 MW, according to official figures from February 2012.

A total of 76 concessions have been granted for geothermal exploration throughout the country, while another 42 are currently being processed and 24 are under study. However, as of now, not a single megawatt of power is produced from this source in Chile.

This situation spurred ACHEGEO to organise its 2nd International Congress on Geothermal Energy, held Apr. 11 and 12. The subjects discussed included legislation, the electricity market, environmental issues, and the need for risk insurance for geothermal drilling failure in Chile.

“What is needed is deep exploration drilling,” for which this type of insurance is crucial, as it would serve as a “concrete and tangible” incentive for the investment required, said Salgado.

To boost its geothermal development, Chile announced a strategic partnership with New Zealand, where 15 percent of electricity is produced from this source.

The Wairakei power station, built in 1957 in the centre of New Zealand’s North Island, was the world’s first wet steam power station and is still in operation today.

“In the last seven years, seven projects have been developed in New Zealand that add up to 550 MW. Thanks to these projects, all of them successful, we have been able to accumulate a good deal of knowledge and experience,” said Bernard Hill, the president of Geothermal New Zealand, an international geothermal consulting and promotion agency.

According to Hill, Chile is the country with the second greatest geothermal potential after Indonesia.

“The international geothermal industry is small, so the people involved know each other. Chile is seen as an important place for geothermal energy and this is reflected in the number of companies that are studying the possibility of investing here,” said Andrea Blair, the geothermal business development manager at GNS Science, another New Zealand-based consultancy firm in the sector.

Companies in New Zealand are seeking the development of mutual support, which would include the transfer of technological know-how with Chile, Blair told Tierramérica.

“Nobody knows Chile better than the Chileans themselves, and we know quite a lot about geothermal development, and so by working together we can ensure that our projects are successful,” she said.

In addition to its scientific and technological expertise, New Zealand can also offer its own experience in relations with indigenous communities when it comes to planning a project.

“There has to be a genuine commitment to the communities and to trying to understand the other side’s point of view, to know what they need, what they want, by maintaining a transparent discussion at all times,” said Blair.

“In New Zealand, the Maoris are part of the project and often they share in the profits as well,” she added.

The scenario she describes contrasts sharply with the situation in Chile, where numerous plans have been halted by the courts due to the opposition of indigenous communities who demand their right to prior consultation, in accordance with Convention 169 of the International Labour Organization.

In New Zealand, on the other hand, “before developing a project, the company has to go and speak with the owners of the land, who are almost always indigenous, and if they do not agree, the project doesn’t go forward,” said Blair.