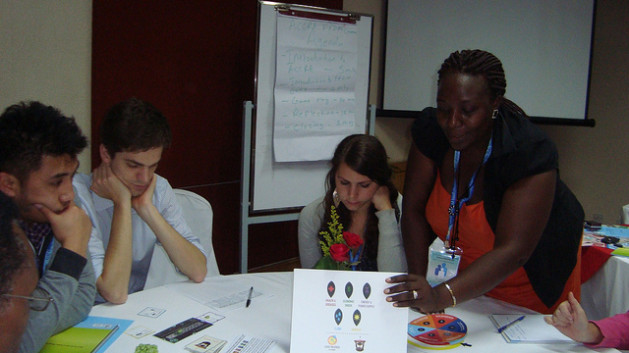 DHAKA, May 7 2013 (IPS) - Adaptation and mitigation. Identified by the United Nations Framework Convention on Climate Change and by scientists as the two major responses to address the problem, these were also the twin preoccupations of a climate change conference held recently in Dhaka.

A joint initiative of the Bangladesh Centre for Advanced Studies (BCAS) – a research, policy and implementation organisation in Dhaka – and the International Institute for Environment and Development (IIED), a UK-based think-tank which works in partnership with fellow organisations in Africa, Asia and Latin America, the Dhaka plenary was the seventh edition of the CBA conference or CBA-7.

“As time goes by, climate change impacts will only get more severe,” Atiq Rahman, executive director of BCAS and co-chair of the Climate Action Network South Asia, told IPS. “If the industrialised nations do not take their roles seriously, then it could lead to catastrophic consequences.”

Speaker after speaker underlined the urgency of addressing the needs of communities vulnerable to climate change. There was not a moment to be lost, they emphasised: the time to act was now.

“It is a race against time,” said Tracy Kajumba, a capacity-building and advocacy coordinator for the Africa Climate Change Resilience Alliance (ACCRA) in Uganda.

“The earlier we get into action, the better it will be. Otherwise, the cost of adaptation will only become higher, leading to population displacement, conflict and increased poverty, and hence huge global tensions,” she commented to IPS.

World leaders also needed to invest more, both in terms of commitment and funds, the experts agreed.

“The world leaders had promised to limit the global temperature rise to 2 degrees Celsius by the end of this century,” Rahman said. “Unfortunately, that has already been
superseded.”

“Honestly speaking,” Susan Nanduddu of the Development Network of Indigenous Voluntary Associations in Uganda remarked to IPS, “the rich nations do not have the will to respond to the damages made by climate change.”

Neither the will, nor the money, it seems. Simon Anderson, head of the IIED climate change group, told IPS, “Many countries affected by climate change have not yet received the proportion or scale of global climate funds to respond to the needs of adaptation strategies. This is a global failure.”

“There is a huge investment gap,” Rahman agreed, “and until that is met, there will be serious political tensions which will lead to conflicts.”

Global efforts – and funds – needed to be channelled mainly in two directions, the experts felt: adaptation strategies to reduce the vulnerability of communities, and the scaling up of mitigation efforts to combat the ever-growing threat of global warming.

“I am afraid the world leaders are not doing enough to focus on the need for adaptation strategies,” Saskia Daggett, ACCRA international coordinator, told IPS. “The funds are the biggest challenge here, and there are huge gaps.”

Kajumba too urged world leaders to make sure adaptation and mitigation interventions were uppermost in all their funding and programme priorities.

But until the funds started coming in, there was something else that could be done, Nanduddu proposed. “Every year you have negotiations for funds to address climate change but the trickledown result is insignificant. So communities have to wake up and do something on their own.”

This means scaling up CBA activities to involve more and more affected communities, in order to build capacity and reduce climate change-induced risks, she said.

“We are not making the most of our opportunities,” Nanduddu stated. “This platform is a real chance to recognise voices and make everything fairer and accessible to those who suffer the most.”

Such scaling up would involve the restructuring and modification of successful adaptation programmes, for them to be implemented in similar environments. These could be areas of saline water intrusion, extreme drought, severe cyclones, water-logging and devastating floods or riverbank erosion.

However, developing the design, demonstration and implementation of all CBA programmes in an organised way would require massive coordination and mobilisation. Hence, the need for a multi-pronged strategy.

For one, it could involve local government agencies entering into more serious interactions with communities and taking lessons from their adaptation initiatives.

The knowledge generated could then be integrated and intensified with CBA initiatives. In turn, these could be used as approaches to reducing climate change risks and enhancing resilience, the speakers noted.

Similarly, they observed, central and local government agencies could integrate this horizontally in all their agencies.

“Adaptation plans have to be long term,” said Nanduddu, “and integrating the adaptation strategies into national development plans is the main challenge here.”

“What we are trying to do here,” Saleemul Huq, director of the International Centre for Climate Change and Development, told IPS, “is to narrow the gaps between the top-down approach of national governments and the bottom-up approach of communities and civil society.”

Highlighting another aspect, Tianna Scozzaro of the Washington-based research and advocacy group Population Action International said, “We are looking at what the impact of migration and urbanisation due to climate change means to urban communities and hence, in a broader sense, looking at population growth and women’s empowerment.

“We want to mobilise resources to meet the unmet needs of women’s reproductive health and how they can adapt to change in such extreme weather,” she told IPS.