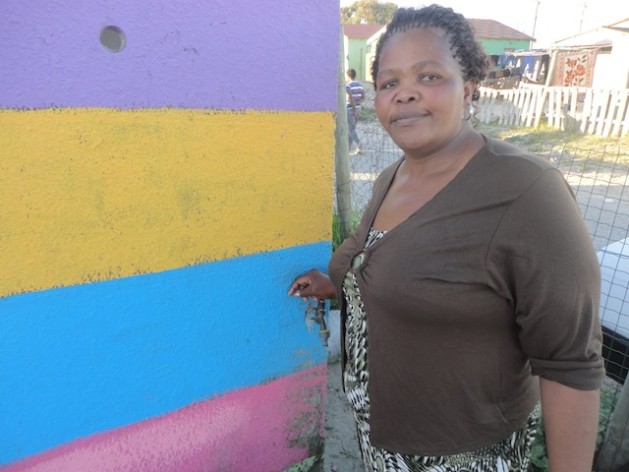 CAPE TOWN, South Africa, May 23 2013 (IPS) - Nokuzola Bulana has a problem with leaks. The water that drips from the pipes of the toilet outside her home in Khayelitsha, a large semi-informal township on the fringes of Cape Town, South Africa goes to waste and drives up her water bill.

Bulana, a water activist, says she fixed the leaks in January but water on the floor at the base of the toilet, which is inside a stall painted with pink, yellow and purple stripes, and pooled on the ground outside the stall, shows that seepages persist.

In March, her eight-person home used over seven times the amount of water the city of Cape Town gives indigent households for free in a month. Bulana blames the leaks for this.

“We don’t mind to pay for the water we drink or cook with but now the water goes down the drain,” Bulana tells IPS when interviewed at her home. “I love the environment. I want to look after the water.”

Bulana is one of many South Africans whose wasted water contributes to the country’s yearly loss of more than a third of its water – a shortfall driven chiefly by leaks, according to a 2012 report from the South African Water Research Commission. These losses cost municipalities more than 731 million dollars annually and drive poor citizens into debt they often cannot afford to pay.

South Africa is also the 30th driest country in the world and could hit water shortages as early as 2025. It can scarcely afford to squander this resource.

At about 4 pm on a Saturday afternoon, there was no water coming from the tap outside 60-year-old Lusi Daniso’s house in Khayelitsha. This is a regular occurrence, Daniso tells IPS.

She claims she gets just 20 litres of water daily – not enough for the eight people living in her home – and has to ask her neighbours for water.

Daniso’s home is one of about 84,000 in Cape Town where the city has installed water management devices (WMDs). Housed in oval boxes with blue lids, the devices are set to provide indigent residents (those with a total monthly household income of 313 dollars or less, or a property value of 20,890 dollars or under) with 10.5 kilolitres of free water per month. This allotment is broken into a 350-litre daily allowance.

The devices cut water supply once the daily limit is reached, and turn it back on the next day.

The WMDs play a key role in the city’s water management strategy and are touted as a way to deal with the 9.2 million dollars indigent households owe the city. If indigent residents choose to have a device installed, the city repairs leaks, installs the device, and cancels their outstanding water debt.

But as IPS reported previously community leaders and civil society organisations have denounced the WMDs.

The devices are going into households with low quality plumbing infrastructure, Taryn Pereira, a researcher with the non-profit Environmental Monitoring Group, based in Cape Town, tells IPS. Leaks from taps, cisterns and underground pipes result in residents not getting their daily 350 litres, she says.

Technicians fix leaks when installing the devices but repairs often don’t last and residents in poor communities don’t have the money to pay for plumbers, says Pereira.

Pereira’s research indicates that residents are not properly consulted about the devices, cut-offs due to leaks and technical problems are common, and people struggle to get help from the city when meters malfunction.

“In this city, this supposedly world-class city, many of our fellow citizens, even once they manage to get a house that they’ve been waiting a long time for on a housing list, are actually, in terms of water, worse off then when they lived in shacks,” she says.

Because of the issues with water management devices, Bulana and other residents in Makhaza, a subsection of Khayelitsha, met with city officials last year and asked for a six-month pilot programme in the subsection whereby the city will fix leaks and freeze residents’ debt without installing the devices.

“We can manage our water because we are the ones using the water,” says Bulana.

Over the past months, the city has been assessing leaks and doing education and awareness in Makhaza in preparation for fixing leaks, councillor Ernest Sonnenberg, the city’s mayoral committee member for utility services, tells IPS in an emailed response.

But that does not mean devices are off the table.

The city will review all the houses affected by the project and analyse their water use, Sonnenberg says. “If residents are unable to decrease their usage as discussed in the meeting the city will review their individual account and install a WMD if necessary.”