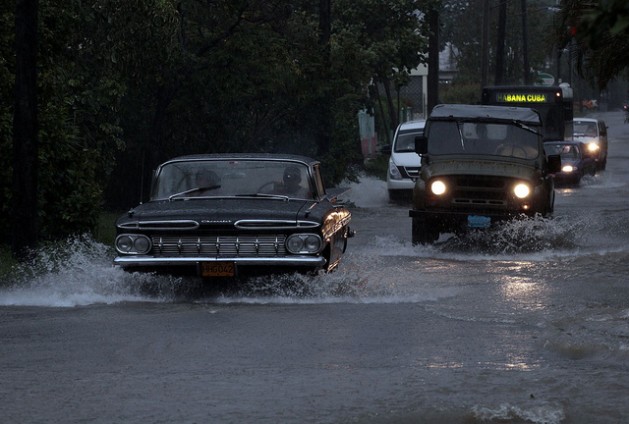 HAVANA, Jun 10 2013 (IPS) - The new cyclone season in Cuba is forecast to be highly active, and it announced its arrival with intense rains that caused rivers to burst their banks and flooded extensive areas in the western province of Pinar del Río.

However, Andrea, the first named tropical storm of the year, did not reach hurricane force.

The heaviest rains fell in Pinar del Río, in the extreme west of this Caribbean island nation, starting in early June when a low pressure system built up in the Gulf of Mexico. It gradually turned into tropical storm Andrea, with maximum sustained wind speeds of 95 kilometres per hour and gusts of higher wind speed.

The western provinces of Artemisa and Mayabeque, adjacent to Havana, were also affected by the rains. The capital city suffered less intense rainfall than Pinar del Río.

Andrea moved away from the westernmost part of Cuba on Thursday Jun. 6, heading for U.S. territory, where it made landfall with maximum sustained winds of 100 km per hour on the west coast of the southeastern state of Florida.

A tropical storm becomes a category one hurricane when its winds attain speeds between 118 and 152 km per hour.

In Cuba, the persistent heavy rains have caused some damage but have also brought benefits.

“There has been a lot of rain around here, but the maize fields have really benefited. We also saved on irrigation water,” María Antonia Lemez, who works on a state farm in Mayabeque, told IPS. She said other crops were undamaged as well.

Even in Pinar del Río, the most affected province, it wasn’t all bad news, as its 24 reservoirs filled up with 187 million cubic metres of water in barely six days, raising the level of the reservoirs from 50 to 83 percent of total capacity, according to official figures.

According to preliminary reports in the newspaper Granma, whole towns and villages in that province, which is frequently in the path of tropical storms, are under water.

“All the lowlands are under water because of persistent rain or river flooding,” reported the newspaper, which estimated some 3,000 people were evacuated to relatives’ homes or shelters.

“The rains have been very heavy. In my house, which was repaired not so long ago, water started coming in through the cracks between the walls and the doors,” Sarilena Ramos, a Pinar del Río resident, told IPS over the phone.

Another woman, who requested anonymity, said that it hadn’t rained so much in Pinar del Río “for many years, even when there were hurricanes.”

Agricultural damage was also significant, but the extent will not be known until the floodwaters recede, the woman said.

In Havana the rainfall was not heavy and reservoirs are no more than 30 percent full. The authorities were keeping an especially close eye on the coastal areas, which are prone to flooding, although the rain did not cause “a critical state” in any of the 15 municipalities of the capital, Granma said.

A report from the Climate Centre at the Institute of Meteorology says the rainy season in Cuba lasts from May to October and comprises approximately 80 percent of annual rainfall. The months of heaviest rainfall are May, June, September and October.

The report adds that rainfall depends on the influence of mobile weather systems from the tropics, such as tropical waves and low pressure areas over the Atlantic, and their interaction with systems in middle latitudes, as well as the presence of tropical cyclones, mainly from August to October.

The forecasting centre at the Institute of Meteorology predicts high activity this season, with the formation of an estimated 17 named tropical storms. Nine of these could reach hurricane category in the northern Atlantic ocean, which includes the Gulf of Mexico and the Caribbean sea.

Meteorologist Maritza Ballester was quoted by the Cuban media as saying there was a high risk that at least one hurricane would reach Cuba, based on the number forecast and the oceanic and atmospheric conditions expected this year.

However, Ballester stressed that the predictions are based on statistics and probabilities, which means it is essential to make advance preparations before every hurricane season, even when the risk forecast for the country is low.

Every year Cuba puts into practice its internationally renowned system of prevention and preparedness, run by the civil defence service, to mitigate the impact of the frequent hurricanes that tear through the island and other extreme events such as droughts and floods, and thus reduce the loss of human lives to a minimum.

In spite of this, material damages tend to be heavy. In 2008, three hurricanes struck the island and cost the nation ten billion dollars, according to official figures.

The consensus among scientists is that hurricanes may be more destructive in future because of the effects of climate change. They recommend a strategy aimed at reducing vulnerability to natural disasters and at educating the public to increase risk awareness.

Sandy was the 18th tropical storm in the 2012 season, and the 10th to reach hurricane force. It buffeted Haiti, the Dominican Republic, Jamaica, Cuba, the Bahamas, Bermuda, the United States and Canada, leaving in its wake billions of dollars worth of damage and nearly 200 dead.