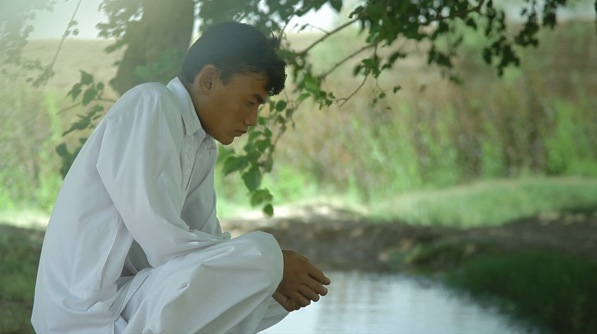 An image from the documentary film "My Afghanistan", directed by Nagieb Khaja. Credit: Henrik Bohn Ipsen

NEW YORK, Jun 26 2013 (IPS) - A bomb blast on a road. A suicide attack near a grocery store. Such is the uncertainty for ordinary men and women in Afghanistan, where daily life is still marred by violence.

The documentary film “My Afghanistan: Life in the Forbidden Zone“, directed by Nagieb Khaja and screened recently at the 2013 Human Rights Watch film festival in New York City, depicts this uncertainty, bringing viewers to Afghanistan’s war-torn Helmand province, where the film’s subjects, with the help of mobile phones, tell their own stories.

There is Hakl Sahab, who drives a dilapidated jeep without brakes, and Abdul Mohammed, who loves his farm and his wife. The film also shows the struggle and determination of a woman who wants to become a journalist.

IPS correspondent Sudeshna Chowdhury spoke with filmmaker Nagieb Khaja about how these subjects portray a different side of Afghanistan from what media usually showcase and how Khaja tells the story of civilians caught in the crossfire.

Q: So many movies have been made on Afghanistan. What did you want to communicate with your film?

A: The mainstream media does not show the full story of Afghanistan. Moreover, I do not think there have been a lot of documentary films in the past that show a civilian perspective of Afghanistan, especially in rural areas.

"The mainstream media does not show the full story of Afghanistan."
-- Nagieb Khaja

Q: Why have mainstream media and journalists not focused enough on rural Afghanistan?

A: The obvious reasons are security and the risk of getting kidnapped. Most of Helmand in Afghanistan is rural. If I wanted to make a film where the audience could actually follow my subjects and see what kind of life they lead, my cameraman and I would have to live with the subjects and accompany them everywhere. All my subjects, as well as my cameraman and I, would draw a lot of attention and risk many lives.

For journalists, it is not impossible for anyone to go out in these areas and interview people. What matters is the method you use to meet the demands of your project or the story you are working on.

If I, as a journalist, lived in a village with a family for a week, people in the area would immediately learn that some stranger is living with the family. Then this family or person could be accused of assisting foreign forces, and they would get into trouble.

All these factors are huge impediments when it comes to making documentaries in rural areas from a civilian perspective in such a way that you can really get to know them.

Q: Why did you use mobile phones for the movie?

A: To have somebody walking around with a video camera is not normal in rural Afghanistan. With mobile phones, it was easier because a lot of people already have mobile phones. So it wasn’t something unusual, although the phones I gave them had touchscreens and were much more expensive than what they were using.

Q: What concerns did you have when you were working on the movie?

A: I was really concerned about one of the women who was a subject in the movie. I was concerned not only about her immediate security but the effect her participation in this project could have on her socially – she might be ostracised if people found out that she was filming for this movie.

The second thing was security issues for some of the contributors living in war zones.

Q: Why did you call the movie “My Afghanistan?”

A: My parents are from Afghanistan – my father left Afghanistan for Pakistan before moving to Germany and then Denmark. I had also visited Afghanistan earlier and was kidnapped by the Taliban.

Q: How different was Afghanistan under the Soviets?

A: The Soviets were brutal when it came to punishing civilians, but infrastructure and education were much more developed during the Soviet era than what we see now. You would see women wearing skirts, and they had a lot of freedom. There was less corruption, too. Right now Afghanistan has a much more conservative society.

What I am saying is that the risk of Afghanistan becoming a much more regressive society is huge. And the world bodies are not doing enough because the United States is the one leading the negotiations. We need a mediator.

Q: Do people in Afghanistan want foreign forces to withdraw as soon as possible?

People there do not see any benefit from a foreign presence. They have this mentality that they want to sort out their problems themselves.