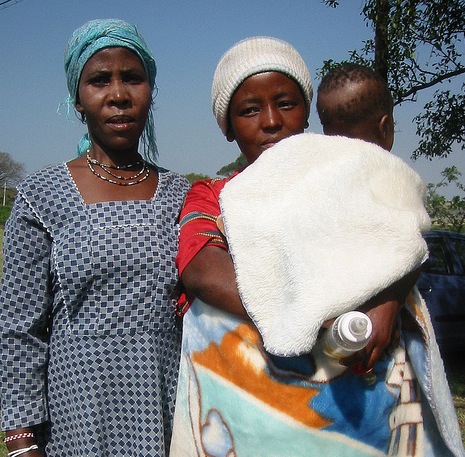 For the past five years, babies have been born in health centres managed by humanitarian organisations in North Kivu, DRC. Credit: Kristin Palitza/IPS

GOMA, DR Congo, Jun 2 2013 (IPS) - “Many hospitals and health centres” that are not run by NGOs “do not meet health standards,” according to Dominique Baabo, provincial medical inspector for North Kivu province in eastern Democratic Republic of Congo.

The health sector in the DRC faces serious medical challenges including having to deal with obsolete biomedical equipment, the lack of cold rooms for vaccine storage, and a shortage of qualified personnel, Baabo told IPS. He added that a lack of maternity wards in the country posed an obstacle to health care here.

But a lack of maternity facilities is not what the people of Matanda, a region in North Kivu province, have to worry about any longer. Theophile Kaboy, the Catholic bishop of Goma, opened a maternity ward in Matanda’s local health centre on May 15. The local diocesan medical office manages the health centre.

Mado Uwiteka, another Matanda resident, told IPS that in the past she had to be “carried to the maternity hospital in Kirotse on a stretcher by foot to deliver two of my children.”

“But it was easy to get to the maternity hospital in Matanda because it’s close by,” she added.

However, in North Kivu, where a long-running conflict has raged, civil society representatives point out that humanitarian agencies have replaced the state – which has practically abdicated responsibility in every sector.

For the past five years, babies have been born in health centres managed by humanitarian organisations. Along every road, you can see new or rehabilitated structures fitted out by humanitarian agencies, “in line with the provincial health inspectorate’s programme,” Baabo noted.

The State of the World’s Mothers 2013 report released on May 7 by international NGO Save the Children ranked the DRC last out of 176 countries on its Mother’s Index. It assesses the well being of mothers according to a number of factors, including maternal health figures and under-five mortality.

The report states that one in 30 women in the DRC is at risk of dying from pregnancy-related complications. In Finland, ranked first on the index, only one out of 12,200 women is at risk.

Speaking to health sector representatives on May 10 in DRC’s capital, Kinshasa, Congolese Health Minister Felix Kabange reacted to the report with an admission that this central African nation will not be able to meet its United Nations Millennium Development Goals to reduce infant mortality by two thirds between 1990 and 2015, or to reduce maternal mortality by three quarters over the same period.

The eight MDGs, adopted by all U.N. member states in 2000, aim to curb poverty, disease and gender inequality.

Although maternal mortality has fallen from 1,800 deaths per live birth to 549 since 1990, “if we continue to deal with the situation in the same way, the country will not even meet these goals in 2065,” the minister said.

Kalume Mushaba, an obstetrics lecturer at the University of Goma, believes that the DRC’s problem is one of leadership. He said that health allocations in this country have never exceeded five percent of the national budget.

The DRC is a signatory to the 2001 Abuja Declaration, in which African countries pledged to allocate 15 percent of their national budgets to health.

Together with Afghanistan, Haiti and the Darfur region in western Sudan, the DRC is amongst the world’s most volatile regions, and receives the most development aid. “Despite this, we are ranked last on the human development index,” Mushaba told IPS.

These figures show an overall poor quality of healthcare in North Kivu, the UNDP study said.

In order to improve maternal and infant health, Mushaba appealed to authorities to address the “three delays” that prevent women from seeking or obtaining care. These are the reluctance to use maternity hospitals for financial or cultural reasons; lack of transport to, or knowledge of, existing services; and inadequate equipment or shortages of qualified personnel.

A month ago, the government signed over 12 million dollars to the U.N. Children’s Fund to purchase radiology and ultrasound equipment, generators, operating tables and solar-powered refrigerators, for the 70 general referral hospitals in the DRC. This marks a new start, said Kabange.

Included in the equipment, which was received on May 10, were 200 gynaecological tables, 5,000 hospital beds, 7,200 examination beds, and pharmaceutical products, the health minister said. “We want to save the lives of more mothers and children, and to protect newborns,” he added.