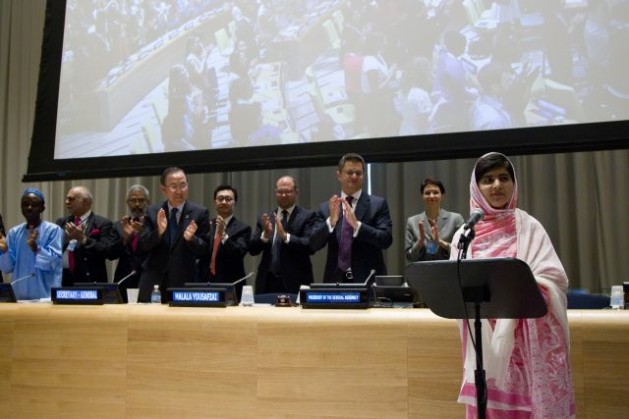 Both of them hail from the remotest areas of Pakistan, which have been battling extremism and terrorism for many years now.

"It was only later that I realised that the Taliban were not pro-humanity and pro-Pakistan. They were killing innocent women and children." -- Muhammad Qasim

Yousafzai is from Pakistan’s northwestern Swat valley, and Qasim comes from the Chakwal region of Punjab.

Yousafzai stood against the Taliban in her pursuit for education. Like Yousafzai, Qasim was determined to educate himself as well as his sisters. He and his friends constructed a secondary school for girls in his village by collecting funds through charity and donations.

In her speech at the United Nations Friday, Yousafzai said, “The extremists were and are afraid of books and pens.

“The power of education frightens them,” she added.

Qasim seconds that. “Those living in cities cannot be targeted by the Taliban because they are educated, unlike in rural areas where there is illiteracy,” he told IPS.

The main commonality between 16-year-old Yousafzai and 23-year-old Qasim is that both of them are children of conflict and education is their passion.

The attack on Yousafzai, who was shot in the head by the Taliban but heroically recovered from her injuries, made headlines all over the world.

Qasim was informed of the attack after receiving a text message from a friend, he said. Since then he and his friends have organised protests, and used social media to raise awareness about girls’ education in Pakistan.

Qasim and Yousafzai came face to face a few days ago in New York. Qasim’s excitement knew no bounds when he spotted her at the airport.

“I inquired after her health,” Qasim said. “She said she was doing fine and that she is planning to select geography and history as her main subjects.”

Dressed in a yellow T-shirt and a pair of jeans, Qasim exudes an air of confidence.

Growing up in a remote area of Pakistan, Qasim had just one dream. “I wanted to become an engineer,” he said.

Qasim is one of the 1,000 youth leaders who arrived at the U.N. in New York City to mark “Malala Day”.

To honour Yousafzai’s courage for standing up against the Taliban and insisting that girls have a right to go to school, Secretary-General Ban Ki-moon has designated Jul. 12 as “Malala Day.”

And on this occasion, Qasim is here to lend his support towards education for girls.

According to a report titled “The State of Pakistan’s Children 2012,” launched by the Society for the Protection of the Rights of the Child (SPARC), a well-known child rights organisation in Pakistan, almost 25 million children and adolescents are out of school in the country.

For Qasim, too, the education he wanted did not come to him easily. After studying for five years in a primary school, Qasim’s father enrolled him into a madrassa (an Islamic religious school).

Qasim was not ready to compromise, he said. Initially, he would juggle his religious and academic education.

“Friday, being the Muslim religious holiday, I would go to school and catch up with the assignments, and the rest of the six days I would be studying in the madrassa,” he said.

Life in the madrassa was tough, recollects Qasim. It was a few months before 9/11 when he enrolled into a religious school in his village.

“I was 11 or 12 years old then,” he said. “At that time the Taliban were our heroes and we would honour them.

However, life in a madrassa did not appeal to him.

“The perception outside is that students are tortured and they go crazy in madrassas,” he said. “I must say that the situation is exactly not the same as being portrayed. But these things do exist where children are beaten and brainwashed. But I was clear from the very beginning that this is not what I wanted for myself.”

Qasim fought with his parents and finally convinced his father to allow him to pursue his studies in a government school.

“This is the only way I could become an engineer,” Qasim said.

Until tenth grade he studied in a village school and then he shifted to a nearby city. He won a merit-based scholarship and is currently studying at an engineering college in the capital, Islamabad. Qasim now works part time for a company. He has extensively worked in flood-hit areas in the country. But he strives to achieve something bigger in his life.

“I want to build a good college in my area and then convert it into a university after a few years so the children from my village can study.”

His trip is an inspiration for the members of his community, but coming to the U.N. might pose a huge risk, he admitted.

“I am concerned when I return home to Pakistan,” he said. “But this is a lifetime opportunity and I wanted to express myself before the world.”

As far as the role of Pakistani government is concerned, Qasim said that the government is trying but corruption has been a major deterrent when it comes to education. Also, changes needs to be implemented at a policy level, along with funding, which continues to be a huge challenge, Qasim said.

According to a new policy paper by the United Nations Educational, Scientific and Cultural Organisation’s (UNESCO) Education for All Global Monitoring Report, 28.5 million children, who constitute half of the world’s out-of-school children, live in conflict-affected countries. The paper further claims that humanitarian aid for education has declined to 1.4 percent, down from 2.2 percent in 2009.