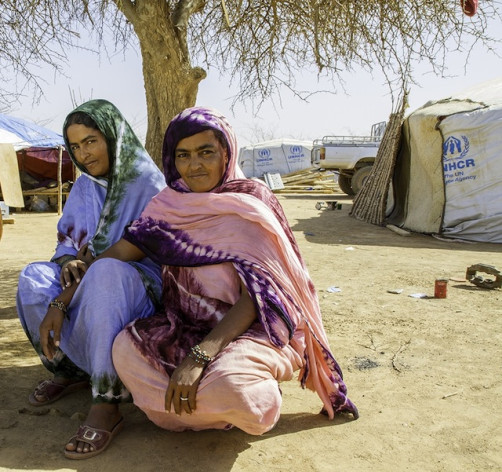 Ramatou Wallet Madouya (r) and her sister Fatma (l) in Goudebo camp, Burkina Faso on February 14th 2013. They are many Malians who fled the fighting in their country and will not be able to vote in Sunday's Jul. 28 presidential election. Credit: Marc-André Boisvert/IPS

BAMAKO , Jul 27 2013 (IPS) - An increasing number of Mali’s political groups have warned of widespread fraud ahead of the presidential election on Sunday Jul. 28.

Reports of intimidation by the army, interference by religious authorities, and claims that there are almost two million extra biometric voters’ cards, have led to uncertainty whether the elections will be free and fair.

“We want the future president of Mali to be chosen through the polls and not through manipulation by non-political actors,” Amadou Koïta, political secretary of the Front for Democracy and the Republic (FDR), told journalists here on Tuesday, Jul. 23. The FDR opposed the Mar. 22, 2012 military coup that overthrew former president Amadou Toumani Touré.

The military had been unhappy with the government’s handling of a Tuareg rebellion in the north of this West African nation. The rebellion saw the Tuareg take over nearly two-thirds of the country for a short time until April 2012. A coalition of armed Islamist groups allied with Al-Qaeda took control of the territory.

This created a human rights crisis in the north. Human Rights Watch said that the rebels engaged in extensive looting, pillage, recruitment of child soldiers and rape of women and young girls.

On Jan. 11, at the request of interim President Dioncounda Traoré, France launched a military intervention that drove the extremists out and paved the way for the Jul. 28 elections. But it appears peace is still a far off dream for Malians. There are an estimated 6.9 million eligible voters but more than 467,000 people – around a third of the population in the north – are currently displaced.

“We have to fight through democratic means, not throught intimidation. That will not work. They tried to intimidate us with weapons after the coup but FDR resisted,” Koïta said. He believes that a faction of the army is openly campaigning for a candidate whom he declined to name.

Members of the FDR also condemned political interference by religious authorities. “Religious leaders are campaigning for a particular candidate, who has paid some of them to campaign for him,” Ibrahima N’Diaye, FDR vice-president told IPS.

The use of biometric cards, which all parties had supported, has also became a source of contention.

“Approximately 1.9 million voter registration cards without photos are in the Ministry for Decentralisation. We still don’t know what the minister is planning to do with them,” Fatoumata Ciré Diakite, a women’s rights activist and FDR member, told the press.

FDR believes that 4,500 voter registration cards were handed over to followers of a religious leader in Nioro du Sahel, a town in northeastern Mali near Mauritania. The town itself has less than 4,500 inhabitants and the religious leader is said to be a supporter of one of the 27 presidential candidates.

On Jul. 20, armed men abducted five electoral agents and a local official in Tessalit, near the northern town Kidal. Many fear that rebels may disrupt the elections.

“We mustn’t forget that there are still security concerns in the Kidal region. Even if six hostages were freed, there is a danger that violence will upset the polling process in that area,” Oumar Touré, a lawyer based in Bamako told IPS.

“The interim president took measures to restore calm by meeting representatives of the rebel Tuaregs and by cancelling arrest warrants against others. The arrangement is provided for in the Ouagadougou agreements, but one can only hope that this will be enough,” Touré said.

Amid this discordant atmosphere, Malian women hope that the future president will promote their rights. There has been an increase in campaigns to raise political awareness among women, who constitute the majority of voters.

“We are hoping that these will strengthen our ability as female leaders to defend peaceful elections,” Nana Sissako, a member of a multi-party watchdog group of women politicians who are calling for non-violent and fair elections in Mali told IPS.

Women represent 52 percent of Mali’s of 15. 8 million people, but have low political representation.

According to the 2009 statistical bulletin of the National Documentation and Information Centre on Women and Children, only 15 out of 147 members of parliament are women. Out of 703 mayors, only eight are women, and there are only 927 women among 10,774 municipal councillors.

In 2006, the Malian National Assembly voted against a draft law for equal representation in parliament but it ratified several regional and international texts and conventions, including the United Nations Convention to Eliminate all forms of Discrimination Against Women (CEDAW).

Bintou Coulibaly from local NGO the Association for the Protection of Women’s Rights, hopes that the country will apply CEDAW provisions.

“In this way, we could achieve the 30 percent quota for female representation at all decision-making levels that we have been calling for for a long time,” she told IPS.