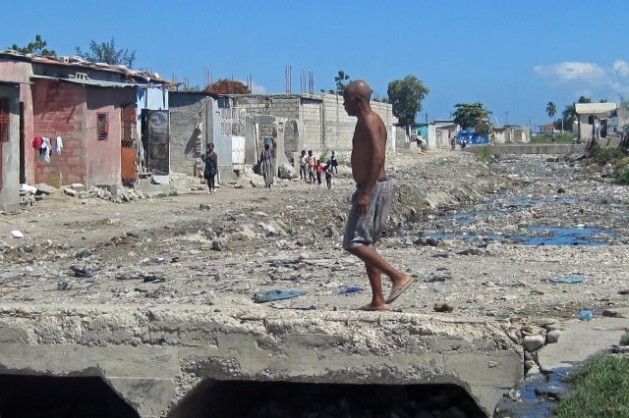 A man crosses a bridge over one of Cité Soleil’s waste canals that lead to the Port-au-Prince harbor. Credit: HGW/Marc Schindler Saint Val

PORT-AU-PRINCE, Jul 26 2013 - Lack of financing for a 10-year eradication plan means that cholera will likely be endemic to Haiti for years to come.

Cholera spreads via contaminated food, water and fecal matter. One of the essential parts of the government’s 2.2-billion-dollar National Plan for the Elimination of Cholera in Haiti is financing for sanitation systems nationwide.

“Haiti is the only country in the entire world whose sanitation coverage decreased in the last decade.” -- Dr. Rishi Rattan of Physicians for Haiti

The majority of Haitians – about eight million out of the country’s 10 million people – do not have access to a hygienic sanitation system. They defecate in the open, in fields, in ravines and on riverbanks. The capital region produces over 900 tonnes of human excreta every day, according to the United Nations Office for Project Services (UNOPS).

“Haiti is the only country in the entire world whose sanitation coverage decreased in the last decade,” noted Dr. Rishi Rattan, a member of Physicians for Haiti, an association of U.S.-based doctors and health professionals.

“Before the cholera outbreak or the earthquake, diarrhea was the number one killer of children under five and the second leading cause of all death in Haiti. Given that cholera is a water-borne illness that relies upon lack of access to clean water, it is highly likely that cholera will become endemic in Haiti without full funding of Haiti’s cholera elimination plan by entities such as the United Nations,” Rattan told Haiti Grassroots Watch (HGW) in an email.

Cholera, brought to Haiti in October 2010 by soldiers from the United Nations Stabilisation Mission in Haiti (MINUSTAH), quickly spread throughout the country. Almost 3,000 are infected each month. To date, over 600,000 people have been infected and at least 8,190 have died.

DINEPA is not the only organisation working on the sanitation issue in Haiti. The U.S.-based Sustainable Organic Integrated Livelihoods (SOIL) treats and transforms human excrement into compost that can be used as fertiliser.

SOIL supplies people and institutions who pay a small monthly fee with special latrines. Every two weeks, the “Poopmobile” collects the excreta. So far, SOIL says their toilets in operation around the country serve about 10,000 people.

SOIL’s compost installation is located at Trutier, north of the capital, not far from one of the two DINEPA waste treatment centres. Three people work there. One empties the Poopmobile drums into the piles that become compost after six months, while the others clean and disinfect the drums so they can be reused.

“A lot of countries use this system,” said Baudeler Magloire, project manager at SOIL. “Many in West Africa. It is a new approach, a kind of ecological sanitation.”

The approach is not completely new. Human fecal matter has been used as fertiliser since the ancient Chinese and Roman civilisations. The Aztec and Inca peoples also used human excreta in their fields.

SOIL is not opposed to the waste treatment “lakes” being used by DINEPA, but the objectives are different, Magloire noted.

“Our mission is to allow for the material to be recycled, transformed and then sent to places in the country where it is needed. People can buy it, sell it, and use it in agriculture,” he said.

The death rate is on the rise in the countryside, due in part to the lack of cholera treatment centres. At the epidemic’s peak, there were 285. Today, there are only 28. Once financing ran out, most humanitarian agencies abandoned the country.

Worse, one of the two large waste treatment facilities built following the earthquake recently went out of service.

“According to our figures, less than 30 percent of the population has access to what we might call basic sanitation,” Edwige Petit, head of sanitation for the government’s National Agency of Water and Sanitation (DINEPA), told HGW. “In neighbouring countries, 92 to 98 percent have basic sanitation.”

By DINEPA’s count, about half of households in the countryside, and 10 to 20 percent in the cities, lack access to a proper toilet or latrine. In Cité Soleil, a slum that is part of the capital region, some use any open patch of ground available.

“When our children have to take a poop, we put them on a little bowl,” explained resident Wisly Bellevue. “We put a little water in there. Once they are done, we throw it into an empty lot.”

Big institutions with septic systems are serviced by “desludging” trucks. In 2010 and 2011, for example, humanitarian agencies emptied the thousands of portable toilets in the refugee camps for the 1.3 million people made homeless by the 2010 earthquake.

Those who cannot pay for that service often hire a more economical one: the men called “bayakou” in Haiti, who empty latrines and septic systems by hand. The bayakou work at night. Most dump their cargo in rivers, canals and ravines.

Before the cholera epidemic, even the trucks used to dump the feces mixed with urine into the ravines that drain into the Caribbean Sea.

DINEPA and its partners have made considerable advances in sanitation since 2010. With assistance from the Spanish government, UNICEF and others, DINEPA built two treatment centres for the capital region, and hopes to build 22 others for a total budget of 159 million dollars.

To date, however, only three have begun to be built: near St. Marc, in Les Cayes in the south, and in Limonade in the north.

The impressive Morne à Cabri waste treatment centre, costing about 2.5 million dollars and inaugurated in September 2011, “has the capacity to treat 500 cubic metres of excreta per day, which is the equivalent of what 500,000 produce,” according to DINEPA.

But there is already a problem.

Today, the centre is closed down. The gates are locked. Lack of financing is one reason. The fees paid by excreta trucking companies don’t generate enough revenue.

Also, after the humanitarian agencies stopped managing the refugee camps – they pulled out once funding ended – deliveries from the portable toilets became problematic.

“We went from having latrine matter being made up of 10 to 20 percent trash, to 70 to 80 percent,” Petit explained. “The treatment centre was not built to handle trash. It was built to handle water and fecal matter. The pools collapsed, blocked with trash.”

Even though it is struggling financially, DINEPA is determined to get things working again.

Of course, the other treatment centre is working, but two challenges remain: convincing the bayakou and others to deliver their loads, and the financing issue. For, even if the excreta is delivered, bayakou will not be able to pay.

Another part of the plan is an education campaign aimed at combating “poor defecation and hygiene practices”. According to Petit, many rural families don’t even bother building latrines any longer.

“Over the past 30 years, a certain mentality has developed, where people know that it’s quite possible somebody else [like a foreign agency] will give them toilets,” Petit explained.

Rather than giving out free toilets and latrines, DINEPA hopes to set up a 120-million-dollar fund that will allow families to borrow the money necessary to do their own construction.

Anti-cholera plan up a creek?

But many aspects of the cholera elimination plan are on hold. Haiti requires 2.2 billion dollars, and a plan for the neighbouring Dominican Republic needs an additional 77 million dollars. For the years 2013 and 2014 alone, Haiti needs 443.7 million dollars.

“[The U.N.] has decreased the amount of money they initially pledged and it has yet to actually be disbursed,” said Dr. Rattan. “This is crippling the Haitian government’s ability to implement their life-saving cholera elimination plan.”

In Cité Soleil, Michelène Milfort knows very well that there will be no plan implemented any time soon. She lives in a tent. Her camp has 38 deteriorating temporary shelters, tents and shacks and only three SOIL latrines to take care of their needs. Before SOIL’s help, they used a nearby empty lot.

“Some people have no regular place to take care of their needs. Sometimes a person has to use a little plastic bag, that he then throws into a canal,” he admitted. “It is not always the fault of the individual. You need to understand that if the person had a place to go, he would not be forced to that extreme.”

Poliné said he wonders about the priorities of the Haitian government and of international actors, especially MINUSTAH.

“They just keep giving MINUSTAH thousands of dollars, while the people of Cité Soleil live in subhuman conditions,” he said.

MINUSTAH’s 2012-2013 budget is 638 million dollars, over 200 million more than what is needed by the Haiti and the Dominican Republic for the first two years of their cholera elimination plans.