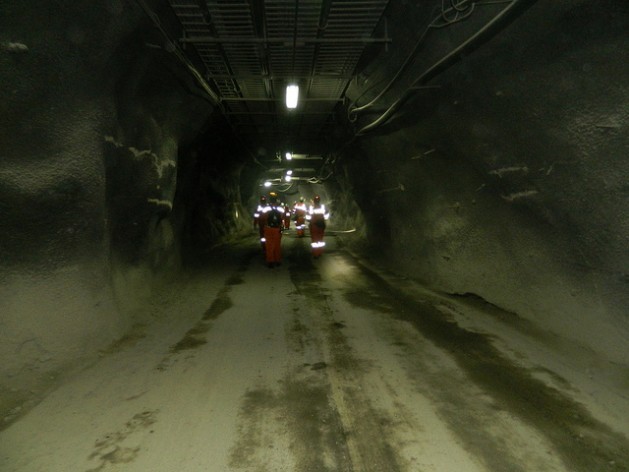 A tunnel in Chile's El Teniente mine, the world's largest underground mine. Credit: Marianela Jarroud/IPS

SANTIAGO, Aug 23 2013 (IPS) - Declining mineral content, the need to preserve the environment, and technological advances are causing big mining companies to turn back to underground mining in what is a rising trend in Chile and around the world, experts say.

Juan Carlos Guajardo, head of the Centre for Copper and Mining Studies (CESCO), told IPS that “not only Chile is opting for underground mining, but the industry itself is evolving towards that kind of extraction.”

The trend, he said, “is because large deposits that have been mined through open cast mining have better reserves at greater depths, and exploration in Chile is tending towards the deeper resources, since the minerals on the surface have long been exploited.”
This South American country possesses the world’s largest underground copper deposit, which is owned by the state National Copper Corporation of Chile (CODELCO) and has been mined since 1905.

The El Teniente Division mine, as it is formally named, was responsible for 25 percent of CODELCO’s total production of 1.75 million tonnes of fine copper in 2012.

Some 137,000 tonnes a day are extracted from El Teniente’s Sector 8, which is currently operating.

But the deposit under the Andes mountain range, 150 km south of Santiago, with 3,000 km of underground tunnels, has only enough copper to last until 2025 at the present rate of extraction.

As a solution, CODELCO is developing its New Mine Level project, which is expected to start operations in 2017 and will access 2.02 billion tonnes of reserves at greater depth, at an altitude of 1,880 metres above sea level, 100 metres below the current mining level.

The project will extend the productive life of the mine for another 50 years. It involves the use of cutting-edge technology and an investment of 3.3 billion dollars, similar to the amount spent throughout the history of this emblematic mine.

“CODELCO has a number of structural projects in hand, aimed at maintaining its leading position as the top world copper producer and maintaining its contributions to the Chilean state,” a company source told IPS.

If these projects were not implemented, the source added, “copper production and the generation of surpluses (financial contributions) for the state would fall dramatically, with enormous effects on the country and the company.”

Chile’s economy depends on copper, which was nationalised in 1971. In 2012, CODELCO made a profit of 7.5 billion dollars, the third-highest level in its history, thanks to output of 5.45 million tonnes.

Chile is the world’s largest producer and exporter of copper, which accounted for 12 percent of Chile’s GDP last year, and 53.9 percent of export revenue.

The main advantage of underground mining compared to open pit mining “is that in general only the ore is extracted, and waste rock is left behind,” Jorge Baraqui, acting manager of mining technology and innovation at CODELCO, told IPS.

“This means you can avoid removal of the material without economic value, and limit environmental impact,” he said.

The operational costs for an underground mine are not necessarily higher than for open pit mines.

“With open pit mining, with time excavation goes deeper and deeper and the cost of transport increases. Also, larger amounts of waste rock must be removed to get access to the same amount of mineral,” Baraqui said.

“That’s why it may be necessary in some cases to shift to underground mining methods, for which operational costs may be more competitive,” he said.

An example of this is the Chuquicamata mine, 1,650 km north of Santiago. It is the largest open pit mine in the world, and it will become an underground mine in 2019.

This is another of CODELCO’s structural projects: the state-owned firm says that in itself the conversion of Chuquicamata will cut down on dust emissions by 97 percent, in spite of building 1,200 km of tunnels.

Chuquicamata is expected to become one of the industry’s lowest-cost mines, mainly because of estimated energy savings of 50 percent.

CESCO’s Guajardo explained that as the transition from open-pit to underground mining proceeds, “there will be some cost reductions compared to the present high operational costs.”

Mining underground may reduce the cost of safety measures, as well as saving time with shorter trips back and forth, using less energy and more technology.

The star of the project is the block caving method, which is relatively low-cost, and is regarded as the method of the future.

“Block caving uses the force of gravity; it requires very little energy to break up the rock, which is undercut from below. Then, as ore is extracted from below, gravity does its work and the rock mass collapses,” Baraqui said.

“It’s a fairly economical extraction method that can be applied in large deposits with certain geotechnical and morphological features that allow them to collapse under gravity,” he said.

Baraqui said the main advantage of this method is its operational costs. “It’s the cheapest underground method for large deposits,” he said.

But there are some geotechnical risks. The main one is rock bursts: spontaneous, violent expulsions of rock which can happen in large underground mines where brittle rocks are subjected to great stress and pressure, Baraqui said.

Another hazard is windblast, caused by a sudden collapse of rock in the mine, resulting in a blast of air at high speed and pressure that is propagated through the tunnels of the mine, carrying all before it.

The move towards underground mining means that in the near future, more than a million tonnes a day of ore will be extracted from the bowels of the earth.