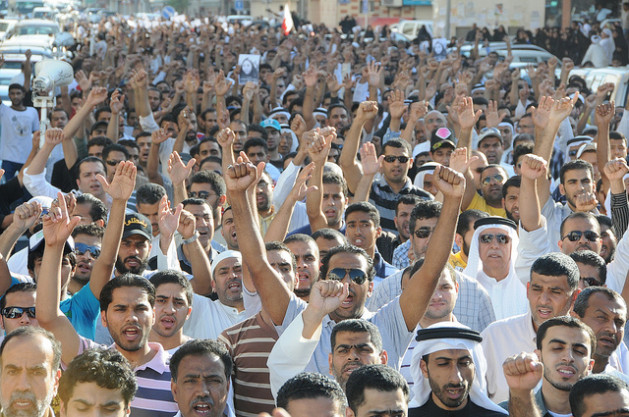 WASHINGTON, Aug 1 2013 (IPS) - The special session of the Bahraini National Assembly held on Sunday Jul. 28 was a spectacle of venom, a display of vulgarity, and an unabashed nod to increased dictatorship.

Calling the Shia “dogs”, as one parliamentarian said during the session, which King Hamad convened, the Al-Khalifa have thrown away any hope for national reconciliation and dialogue.

The 22 recommendations approved during the session aimed at giving the regime pseudo-legal tools to quash dissent and violate human and civil rights with impunity. All in the name of fighting “terrorism”.

Watching a video of some of the speeches during the session, one is saddened by how low official political discourse has become. Students of Bahrain yearn for the days when parliamentary debaters were civil and when Shia and Sunni parliamentarians engaged in thoughtful, rational, and tolerant debates despite their political or ideological differences.

In the early 1970s when the Constituent Assembly debated the draft constitution, Bahrainis followed the speeches by their elected and appointed representatives with much respect and hope for the future of a modern, tolerant, and civil society.

Such parliamentarians as Rasul al-Jishi, Jasim Murad, Ali Saleh, Abd al-Aziz Shamlan, Ali Sayyar, Isa Qasim, Qasim Fakhro, and others made their countrymen proud with the quality of debate that characterised Bahrain’s first ever elected parliament.

Even such ministers as Muhammad bin Mubarak al-Khalifa, Ali Fakhro, and Yusif Shirawi participated in those parliamentary debates and worked jointly with elected members to chart a more hopeful future for all the people of Bahrain.

As I sat through those parliamentary sessions in 1973 and followed the lengthy discussions on a myriad of constitutional amendments, I envisioned a democratically prosperous Bahrain for years to come. The National Assembly, however, was dissolved two years later, and the constitution was suspended. Al-Khalifa ruled by decree ever since.

The parliamentary special session last Sunday showed a divisive, intolerant, and fractured country that is rapidly descending into chaos. It’s as if civility, rationality, and moderation have become relics from the past.

King Hamad and the Crown Prince welcomed the recommendations, and the powerful prime minister urged his ministers to implement them immediately; in fact, he has threatened to fire any minister who slows their implementation.

According to media reports, the recommendations were prepared before the meeting and were disseminated to the media a few minutes after the session ended. They were not even debated meaningfully or rationally during the session.

The regime’s fear that Bahrainis would have their own “tamarud” (rebellion) civil disobedience movement to confront the regime on Aug. 14, Bahrain’s actual independence day, drove the timing of the session. The Bahraini opposition hopes to emulate the Egyptian “tamarud”, which indirectly led to Morsi’s removal.

Like other autocratic regimes, whether under Abdel Fattah al-Sisi in Egypt or Bashar al-Assad in Syria, Al-Khalifa justified the draconian recommendations against all forms of opposition and peaceful dissent in the name of fighting “terrorism” and incitement of “all forms of violence” (Recommendation #3). The regime will likely use these recommendations to ban all peaceful demonstrations and protests.

The regime is prepared, according to Recommendation #2, to revoke the citizenship of Bahraini citizens “who carry out terrorist crimes and those who instigate terrorism”. The regime defines a terrorist as any Bahraini who is suspected of being a dissident or actively advocating genuine reforms. In fact, Recommendation #6 bans “sit-ins, rallies and gatherings in the capital Manama”.

The regime does not seem perturbed by the fact that citizenship revocation violates international legal norms and the Bahraini constitution. In fact, this might be a sinister way for the Sunni al-Khalifa to alter the demographics of the country by depriving the Shia dissidents of citizenship.

Viewing the entire protest movement through the security prism, as the recommendations imply, the regime seems bent on escalating its crackdown against peaceful protest and freedoms of speech and assembly, according to the Bahrain Centre for Human Rights.

Under Recommendation #7, the country could soon be ruled under martial law or “National Safety”, as the regime euphemistically calls it.

The recommendations have put the country on a sectarian collision course, have dealt a major blow to peaceful dissent and civil rights, and have raised serious questions in Washington about Al-Khalifa’s commitment to genuine reform.

In a direct rebuke to U.S. Ambassador Thomas Krajeski, Recommendation #11 requests “that all ambassadors to Bahrain to not interfere in the kingdom’s domestic affairs.”

Some die-hard Sunni parliamentarians, with the support of the Royal Court, have urged the regime to expel Ambassador Krajeski from Bahrain, claiming he has been meeting with pro-democracy Shia dissidents. Others have threatened his personal safety.

Still others, with tacit regime support, are hoping the ambassador would be transferred out of Bahrain, much like what happened to political officer Ludovic Hood in May 2011.

At the time, according to the “Religion and Politics in Bahrain” blog, pro-regime Sunni activists demanded Hood’s removal because they claimed he offered “Krispy Kreme doughnuts to demonstrators who had gathered outside the American Embassy” to protest perceived U.S. support for Al-Khalifa.

Now pro-regime Sunni activists are feverishly campaigning against the U.S. ambassador’s public support for human rights and genuine reform in Bahrain. The recommendation curtailing diplomatic activities in the country is squarely aimed at Ambassador Krajeski.

According to Bahrain Mirror, some have advocated banning him from appearing on state media and in pro-regime newspapers, even if the subject he is discussing is gourmet cooking, one of the ambassador’s hobbies!

The anti-Shia and anti-reform underlying theme of the recommendations is a naked display of tribal family autocracy, which Al-Khalifa are determined to preserve at any cost, including tearing the society apart. Adopting these recommendations reflects the regime’s nervousness about the ever-increasing precarious nature of their rule and the unstoppable demands for justice, dignity, and equality.

According to a recently leaked audio recording, Crown Prince Salman was quoted as saying, “The current situation is unsustainable, and the policy we are pursuing cannot continue. People are getting tired, and conditions could worsen any moment. Bigger dangers are threatening our society, and the future is becoming more precarious.”

Washington and other Western capitals should work diligently to disabuse the king and the prime minister of the notion that “securitisation” is the answer to Bahrain’s domestic ills. Engaging with the public on the future of Bahrain, including the Shia majority and the pro-democracy youth movement, is the only way to bring the country back from the brink.

Washington should make it clear to Al-Khalifa that media attacks and threats against Ambassador Krajeski should stop. Whipping the flames of hatred against the U.S. embassy to preserve the regime’s dictatorial rule is a dangerous game, which Al-Khalifa cannot afford to engage in.

As a first and immediate step, King Hamad should muzzle the hotheads in his Royal Court and in the prime minister’s office. In the meantime, the U.S. should initiate serious discussions on how and when to move the Fifth Fleet out of Bahrain to a neighbouring country or over the horizon.

Emile Nakhleh, a former Senior U.S. Intelligence Service Officer, is a Research Professor at the University of New Mexico and author of “A Necessary Engagement: Reinventing America’s Relations with the Muslim World and Bahrain: Political Development in a Modernizing Society”.