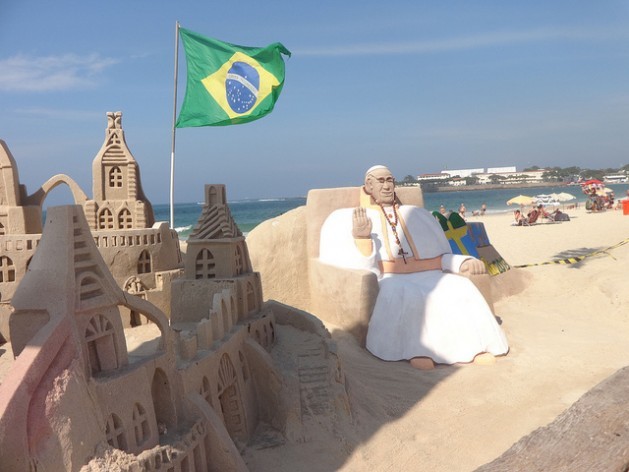 Analysts wonder how solid are the changes in the Catholic Church, referred to by Pope Francis. Credit: Fabiana Frayssinet/IPS

RIO DE JANEIRO, Aug 1 2013 (IPS) - “The rivalry between our countries is over: if the pope is Argentine then God is Brazilian,” Francis joked when journalists asked him why he was so beloved in this country, where millions came out to see him, despite the historic football rivalry between South America’s two giants.

Meanwhile, religious analysts wonder how far the Catholic Church is willing to “negotiate”, as an institution, on taboo issues like the ordination of women as priests, the integration of divorced and remarried Catholics, and the rejection of homosexuals.

Pope Francis – formerly Argentine bishop Jorge Bergoglio – was especially careful to leave those issues off the agenda of the Jul. 22-28 events of World Youth Day, which drew him to Brazil.

Reading between the lines, many saw his responses to reporters on the plane that took him back to the Vatican as signs of a “revolution” from the pope who comes from the land of legendary revolutionary Ernesto “Che” Guevara. Or at least as a sign of a new openness on the part of the Roman Catholic Church.

“If someone is gay and he searches for the Lord in good faith, who am I to judge? The Catholic Church teaches that gay people should not be discriminated against; they should be made to feel welcome,” Pope Francis said in the press conference.

But he went on to condemn the “gay lobby,” saying ”I think that when we encounter a gay person, we must make the distinction between the fact of a person being gay and the fact of a lobby, because lobbies are not good.”

Frei Betto, a Brazilian writer, theologian and Dominican friar, told IPS that the pope was a leader willing to make concessions, a man of dialogue rather than discipline. “We no longer have a conservative pope, like the two who preceded him,” he said.

But they are concessions, not revolutions, said sociologist Luiz Alberto Gomes de Souza, director of the Science and Religion Programme at the private Cándido Mendes University in Rio de Janeiro.

The sociologist doesn’t see the Argentine pope as a “rebel” who has come to the Vatican to change the Church’s doctrine.

“I would say the pope won’t change the traditional doctrine on a series of issues, but that yes, by avoiding a full-on condemnation, to a certain degree he has emitted a liberating silence. In other words, a silence that allows these issues to begin to be discussed,” Gomes de Souza told IPS.

But the bishop of Rome – as Francis prefers to call himself, as part of the no-frills style he has brought to the papacy – closed the door on other issues like abortion or same-sex marriage, to which he was staunchly opposed as a cardinal in Argentina.

“On the ordination of women, the church has spoken and said no,” Francis said on the plane. “John Paul II definitively said that door is closed.”

Nevertheless, Gomes de Souza said Francis had opened another door: to a new “climate” favourable to debate on questions that had been “frozen,” such as mandatory celibacy for priests, sexual morals, chastity among the young, the condemnation of birth control methods, and sexual diversity.

“People (in the Church) were afraid to discuss these questions,” the expert said. “Now, to a certain degree, he has thawed the freeze surrounding them.”

Frei Betto said: “He will not close the debate within the Church on issues of moral theology that have been frozen since the 16th century, and that theologians could not address without running the risk of censure or sanctions.”

The pope did not refer to the questions in regard to which debate has been “frozen”. But he did address other hot issues tackled by the journalists on the plane, such as divorce or the participation of women in the Catholic Church.

“I believe this is a time of mercy…In terms of communion for those who have divorced and remarried, it has to be seen within the larger pastoral context of marriage. When the council of eight cardinals meets Oct. 1-3, one of the things they’ll consider is how to move forward with the pastoral care of marriage,” Francis said, referring to the demand that Catholics who remarry after divorce be allowed to take communion.

He also left open the question of reforming the process for annulling marriages.

In addition, he opened a door for women. “A church without women would be like the apostolic college without Mary…we don’t yet have a truly deep theology of women in the Church,” he said.

Paulo Carneiro de Andrade at the Pontifical Catholic University of Rio de Janeiro described the new climate in the Church as “optimistic,” not because of a “change in doctrine, but in the pastoral relationship.”

A climate that is necessary in a Catholic Church that is losing ground to evangelical groups with more festive rituals and preachers who are closer to their flock.

What changed, according to Carneiro de Andrade, was “the pastoral context in which we are now speaking.” Like Gomes de Souza, the theologian said there was no “innovation” in issues like the integration of gays in society and the condemnation of homophobia – or the integration of divorced and remarried Catholics, which had already been discussed during the time of Francis’ predecessor, Benedict XVI.

“It comes as a surprise because the tone used to be negative, one of condemnation, of distrust towards the modern world,” Carneiro de Andrade told IPS. “This pope shows a more positive and constructive vision of the Christian faith. That’s why what he says takes on another dimension.”

A new dimension carefully interwoven in the choice of a new pope.

He is “a necessary pope, who was selected due to Benedict’s resignation and admission that he could not handle the problems that the Church was facing,” Frei Betto said.

In an interview with Brazil’s Globo TV station that aired Jul. 27, “Francis made it clear that the cardinals at the conclave had agreed to choose someone who was capable of transforming the Church,” he said.

Carneiro de Andrade said they were looking for a more proactive pope, with a more optimistic view of the future.

The attitude of Francis, all smiles and jokes in Rio de Janeiro, pointed the way. Which, compared to Benedict’s ever stern, serious expression, is indeed a revolution.