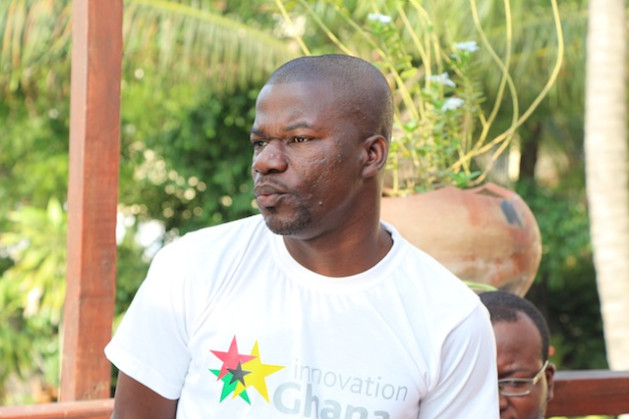 Entrepreneur Edward Tagoe is co-founder of the software company, Nandimobile. However, research shows that of the 250,000 young people who enter Ghana’s job market annually, only two percent find employment in the formal sector. Credit: Billie McTernan/IPS

Avemee studied public relations at the Ghanaian Institute of Journalism and had hoped to secure a job in the field after completing her national service at the Ghanaian Tourism Board in 2012. In previous years it was not uncommon for graduates to be kept on at the institution where they did their service.

However, in 2008 the International Monetary Fund advised the Ghanaian government to put a freeze on public sector recruitment – except in the areas of health and education – to curb the public sector wage bill, putting a strain on school-leavers and graduates looking for work. The freeze lasted two years and ended in 2011.

Avemee tells IPS that the situation has become so dire that some of her counterparts have taken to prostitution and “sakawa”, internet fraud.

Data and statistics on employment in Ghana is sparse.

In 2012 then minister of employment and social welfare Moses Asaga admitted that the government had no up-to-date or reliable data on the labour market.

Information available from the Institute of Statistical, Social, and Economic Research (ISSER) at the University of Ghana in Legon suggests that approximately 250,000 young people enter the job market annually of which two percent, or about 5,000, find employment in the formal sector.

According to research being carried out by the ISSER, 23 percent of youth aged between 15 and 24 and 28.8 percent of graduates between the ages of 25 and 35 wait two years or more before they are employed.

Dr William Baah-Boateng, one of the researchers of the ISSER study, says that over the last 20 years Ghana’s growth has averaged 5.1 percent, and this has not been reflected in an increase in employment.

A further report by the International Labour Organisation says that the public sector accounts for six percent of employment in Ghana, and that of the informal private sector stands at 86 percent.

Tagoe himself graduated in 2007 from the University of Ghana and started Nandimobile in 2010 having run a small business whilst studying. After university Tagoe completed a two-year entrepreneurship training programme at Meltwater Entrepreneurial School of Technology, a not-for-profit organisation in Accra that helps to train and mentor budding Ghanaian entrepreneurs.

“I suppose I fall into the category of people [graduates] that took matters into their own hands,” he laughs.

When young people leave school or university it is likely that they have not had any kind of formal work experience.

“We don’t really have an internship [or] part-time work culture here,” says Tagoe.

For Avemee finding a job has been trying not least because many positions require five years experience, which she does not have.

Gameli Adzaho, 27, who after graduating wanted to further his studies but needed money to fund it, found himself in a similar situation.

“When I graduated in 2007 I was interested in going into health research, but with just the first degree you don’t usually get that opportunity or you would need some years of work experience…so there was a catch 22,” he tells IPS.

Adzaho has since been able to find a job as a science teacher at Keta High School in the Volta Region. In August he won a scholarship to study for an MSc in Environment and Human Health at the University of Exeter as part of a joint initiative by Tullow Oil and the British Council in Ghana. The programme awards 50 young Ghanaians scholarships to study in the United Kingdom with the aim to develop a good human resource base for the oil industry and other areas of development in Ghana.

GYEEDA’s reputation came into disrepute when an August report monitoring its progress revealed that funds allocated to youth job creation had been misappropriated.

During a state visit to Benin earlier this month, Ghanaian President John Mahama admitted that GYEEDA had not carried out its duties as effectively as it should.

“There have been a few problems, loopholes that people took advantage off but we are working on that,” he said.

Minister of employment and social welfare Nii Armah Ashietey, Asaga’s replacement following a cabinet reshuffle in April, has since appointed a taskforce to establish a Labour Market Information System to collate useable statistics.

In July, Ashitey urged young people to develop vocational skills and avoid relocating to the cities for white-collar jobs that do not exist. He said 92,000 dollars had been earmarked for skill development programmes and that a Graduates Unemployment Support Scheme had been put in place to address issues of unemployment.

Despite such initiatives Avemee is not convinced. “They [the government] just give empty promises,” she says.

Lack of employment has left many young people questioning whether Ghana is the place for them if they want to get their foot on the job ladder.

Avemee has returned to school in the hope that it will give her a better chance when applying for a job and perhaps help her leave the country. “I would like to go to France… in the next five years,” she confesses.

But Adzaho has his sights firmly set on Ghana. “I will return after the year … I’m 100 percent committed to returning back to Ghana.”