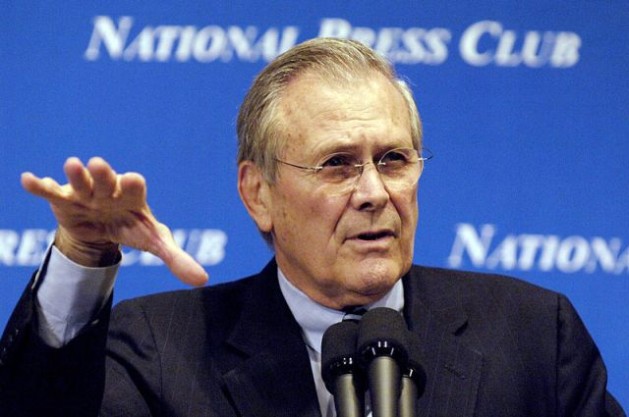 The Israeli claim of Iranian ICBMs targeting the United States was first made 15 years ago, after a commission led by Donald Rumsfeld warned in mid-1998 that Iran and North Korea “could” threaten the United States with ICBMs within five years. Credit: public domain

WASHINGTON, Oct 11 2013 (IPS) - In an effort to provoke any possible opposition in U.S. political circles to a nuclear deal with Iran, Israeli Prime Minister Benjamin Netanyahu has returned to exploiting an old claim that Iran is building intercontinental ballistic missiles that could hit the United States.

The Netanyahu claim takes advantage of the extreme position that has been taken on the issue by Pentagon and Air Force intelligence organisations but goes even further.

In an Oct. 1 interview with Bob Schieffer of CBS News, Netanyahu said Iranians are “building ICBMs to reach…the American mainland within a few years”. And in an interview with Charlie Rose a week later, he said the Iranians “are developing ICBMs – not for us, but for you.”

Netanyahu added, “The American intelligence agency knows as well as we do that Iran is developing ICBMs.”

Independent specialists on the issue say, however, that no evidence supports Netanyahu’s claim.

Elleman said Iran would need to test a missile at least a half dozen — and more likely a dozen times — before it would have an operational capability for an ICBM.

Thus far, however, Iran has not even displayed, much less tested, a larger version of its existing space launch vehicle that would be a necessary step toward an ICBM, according to David Wright, co-director of the Global Security Programme at the Union of Concerned Scientists.

Iran has only tested a space launch vehicle that can put a very small satellite into orbit, Wright told IPS.

“The fact that it’s not happening suggests something is holding them back,” said Wright. “Clearly we’re not seeing them moving very fast in that direction.”

The highly politicised nature of U.S. intelligence assessments on the Iranian ballistic missile programme has given Netanyahu the opportunity to make the claims of an incipient Iranian ICBM without fear of being called out.

Pentagon and industry interests pushing the idea of an Iranian ICBM threat to get support for spending on a missile defence system have long had a deep impact on intelligence assessments of the issue.

Netanyahu actually began warning of Iranian ICBMs targeting the United States 15 years ago, after a commission on foreign ballistic missile threats led by Donald Rumsfeld had warned in mid-1998 that Iran and North Korea “could” threaten the United States with ICBMs within five years.

The Rumsfeld Commission, which was organised to pressure the Bill Clinton administration to approve a national missile defence system, arrived at its five-year timeline by inviting the four major military contractors to suggest how Iran might conceivably succeed in testing an ICBM.

It also rejected the normal practice in threat assessment of distinguishing between what was theoretically possible and what was likely.

Since 2001, the U.S. intelligence community has been saying that Iran “could” have the capability to test an ICBM by sometime between 2012 and 2015, if it was given enough foreign – meaning Russian – assistance.

But it was generally recognised that the Russian government was unlikely to assist Iran in building an ICBM. And as the report on the issue published by the National Intelligence Council in December 2001 explained, “We judge that countries are much less likely to test as early as the hypothetical ‘could’ dates than they are by our projected ‘likely’ dates.”

In other words, “could” actually meant “is unlikely to”. But that fact was never covered in news articles, so it remained unknown except among a few policy wonks.

By 2009, it had become obvious to most of the intelligence community that the 2015 date could no longer be defended, even with the misleading “could” formulation. A National Intelligence Estimate that year, which was never made public, reportedly said Iran couldn’t achieve such a capability until sometime between 2015 and 2020.

Intelligence organisations connected with the Pentagon and the Air Force, however, never gave up the 2015 date. The Air Force’s National Air and Space intelligence Centre and the Defence Intelligence Agency published a paper that repeated the mantra: “With sufficient foreign assistance, Iran could probably develop and test an intercontinental ballistic missile (ICBM) capable of reaching the United States by 2015.”

In April 2010, the Pentagon quoted that statement word for word in a report to Congress.

When Netanyahu wanted to turn the heat up on the Iran nuclear issue in February 2012, his close allies cited that military estimate in support of an even more extreme claim. Strategic affairs minister Moshe Yaalon said Iran was developing a missile with a 6,000-mile range, which would allow it to reach the east coast of the United States.

Israeli Finance Minister Yuval Steinitz went even further. “We estimate,” he said, “that in two or three years they will have the first ICBMs that can reach the east coast of America.”

Steinitz said the Israeli assessment was in line with the assessment of the Pentagon. But even the military estimate doesn’t say that Iran would have such an ICBM. It said only that Iran could test an ICBM, which would still leave Iran several years away from having an operational ICBM.

In July 2013, the Air Force National Air and Space intelligence Centre, DIA and Office of Naval Intelligence issued a new report on “Ballistic and Cruise Missile Threat” that states flatly, “Iran could develop and test an ICBM capable of reaching the United States by 2015.”

That language omitted any reference to foreign assistance, which had always been a key element in the formula that had been adopted to satisfy missile defence interests.

But those interests were obviously pressing for even stronger language. Missile defence advocates have been pressing Congress to approve a missile defence site on the East Coast, making an Iranian ICBM threat even more important politically.

Iran, meanwhile, has said it is not interested in ICBMs at all. Defence Minister Ahmad Vahidi said in April 2010 that Iran “has no plans to build such a missile”.

And Brig. Gen. Amir Ali Hajizadeh, commander of the Aerospace Division of the Islamic Revolutionary Guard Corps (IRGC), which has guided Iran’s missile programme for decades, said in 2011 that Iran had no intention of producing missile with ranges beyond 2,000 km.

Iran was only interested in missiles that targeted U.S. bases in the region, Hajizadeh said.

Iran had a good strategic reason for its disinterest in an ICBM, according to a team of U.S. and Russian specialists who analysed the Iranian missile programme in May 2009. Iran would have to use rocket motor clusters, the U.S.-Russian team observed, and longer-range missiles based on that technology would have to be launched from above ground.

It would take days to prepare for launch and hours to fuel – all of which would be clearly visible to spy satellites, according to the team.