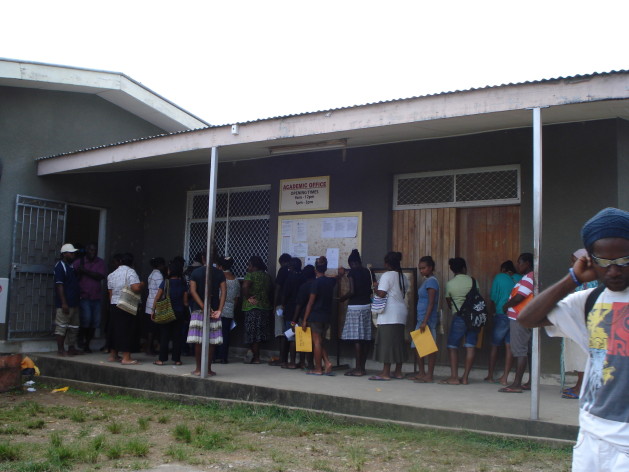 HONIARA, Nov 6 2013 (IPS) - External interference in the awarding of tertiary scholarships in Pacific Island nations such as the Solomon Islands is denying some of the highest achievers among the young an opportunity to contribute to the future of their country and the region.

“The problem is unnecessary endorsements of students who do not have academic entitlement,” Wilfred Luiramo, president of the University of the South Pacific (USP) Solomon Islands Students Association in capital Honiara told IPS. “This is a waste of taxpayers’ money and it is having a negative impact on the human resources of this country and the economy.

“Many students who are victims do not continue with their studies. They go back home or apply for low-paid jobs.”

“When those who do not have academic merit are given overseas scholarships, they do not perform well in their studies and are unable to contribute in any meaningful way to the country’s development.”

A report this year by the auditor general on management of nationally awarded tertiary scholarships identified issues such as preferential treatment of applicants and granting of additional scholarships outside the official approval process with “no evidence of selection criteria used for assessment of applications” and “no supporting documentation of reasons for awarding scholarships.”

Forum Solomon Islands, a concerned citizens group, received more than 60 public complaints about scholarship inconsistencies in the first months of this year alone. But CEO Benjamin Malao Afuga says the problem has been prevalent for years.

“We have had reports of this happening throughout the country” in relation to scholarships to international education institutions and sponsorship for further study within the country, a spokesperson for Transparency Solomon Islands told IPS. The anti-corruption civil society organisation believes “the problem is that government ministers have discretion over recommendations and this is being abused.”

General Secretary of the National Teachers Association in Honiara, Walter Tesuatai, identified key factors as “political interference, bribery and nepotism” which he believes are influenced by the ‘wantok system’.

In Melanesia and other Pacific Islands, people traditionally express their first allegiance to the extended family (‘wantoks’), and this can entail relationships of mutual social and economic obligations. Those who attain access to power or wealth are frequently under pressure to facilitate benefits to their closest relatives or associates.

The East-West Centre in Hawaii acknowledged in a report on education that “political and other elites appear to have unfair advantage in accessing publicly funded scholarships for study overseas” in a number of Pacific Island states.

The opportunity that a scholarship confers on students in developing Pacific Island nations, where the cost of tertiary education is out of reach to families on low incomes or engaged in subsistence livelihoods, cannot be overestimated.

“University education is expensive and there is a growing demand for scholarships as more students complete secondary school,” a spokesperson for the Ministry of Education’s National Training Unit (NTU), which is responsible for allocating scholarships, told IPS.

The demand will only increase in the Solomon Islands where the youth population is predicted to grow rapidly until at least 2025. Currently 40 percent of the population is under 14 years and only one in six school leavers will join the formal workforce.

This year the education ministry received 1,650 applications from school leavers for 300 government scholarships. To be eligible, students must have completed Form 7, the final year of secondary education, achieved a Grade Point Average (GPA) of at least 3 in their academic results, and be applying to study a priority subject for the country’s development needs, such as medicine or science.

A ministry spokesperson acknowledged that cases of external interference were known to occur after the official selection list by the National Training Council was issued to the public and those who were disgruntled or who had influential connections lobbied politicians to intervene on their behalf.

In a country still striving for reconstruction and socioeconomic recovery following a debilitating five-year civil conflict 1998-2003, this type of corruption impacts a younger generation hoping to achieve a better future through education and merit.

“Many students who are victims do not continue with their studies,” Luiramo said. “They go back home or apply for low-paid jobs.”

A 20-year-old exceptional student from Temotu province who was officially granted a scholarship at the beginning of this year committed suicide after his award was withdrawn and given to the child of a member of parliament.

Afuga emphasised that the future of the country depended on such practices becoming unacceptable. “If people are honest with what they are doing and have a passion for this country, we wouldn’t run into this problem.”

An Auditor General’s report on corruption in 2007 highlighted that improved internal controls and more effective action to combat corruption was urgently needed to reduce incentive and opportunity for maladministration in the public sector.

According to Transparency International’s 2013 Global Corruption Barometer, 34 percent of respondents in the Solomon Islands reported paying bribes for services. On a scale of 1 to 5, where 1 is the least corrupt, the education system was rated 3 and public officials and civil servants at 3.6.

Transparency Solomon Islands, which says it will support public litigation in future cases of interference with scholarship awards, advocates limits on the discretionary powers of politicians. It says an external independent commission should be tasked with screening applications and overseeing the final selection process.