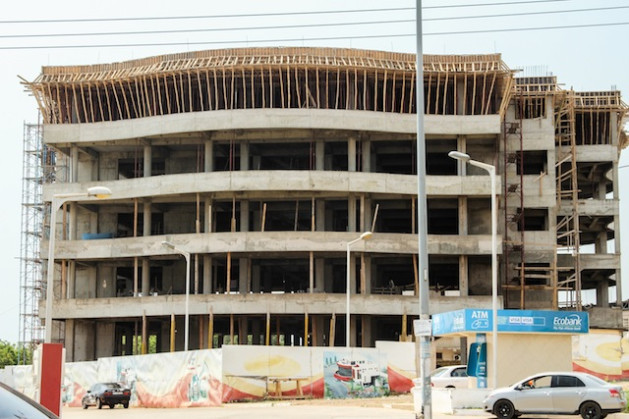 With a growing population and a lack of housing to meet the demand, Accra’s rental market is not a level playing field. Credit: Selorm Kwame Attikpo/IPS

ACCRA, Dec 4 2013 (IPS) - Across Accra, Ghana’s capital city, adverts for letting property can be found all over. But for as many placards there are, you will get just as many verbal warnings from locals cautioning people to beware of swindling agents.

With a growing population and a lack of housing to meet the demand, Accra’s rental market is not a level playing field. The majority of renters struggle to keep up with the pace as they try to scrape together hundreds of dollars in rent to secure a roof over their heads.

Elvina Quaison is a marketing manager who came to this West African nation from London in 2011 hoping to start her own business. Aged 32 at the time, Quaison knew she did not want to live with family but had not anticipated just how expensive living in Accra could be.

She stayed with a friend when she first arrived and began her search after a couple of months.

“Very quickly my budget went from 200 dollars per month to 400,” Quaison tells IPS.

Nana Osei, a 25-year-old recent graduate, currently lives with his aunt and is looking for a place of his own.

Rental rates for a two-bedroom apartment or self-compound house close to the centre of the city can start at 200 dollars and reach as high as 2,000 dollars in more upmarket areas. Such properties are usually reserved for expat workers whose rent is paid for by their companies.

The minority leader in parliament from the New Patriotic Party, Osei Kyei-Mensah-Bonsu, tells IPS: “Families in regular employment can get [rent] advances from their work places. And they survive on shoestring budgets … it’s at the [expense] of providing good schooling for their kids and providing square meals for the family.”

According to the Ghana Statistical Service, the official population in greater Accra has grown from 2.9 million in 2000 to four million in 2010, as a result of people flocking to the capital in search of better work prospects. However, the actual number of people living in the city is thought to be at least eight million.

The country has a housing deficit of approximately 1.5 to 1.7 million units. And in a city with a lack of decent accommodation available for rent, it is a homeowners market.

And accommodation is becoming more difficult for ordinary people to afford. With a rapidly growing economy – GDP growth was 15 percent in 2011 – prices are increasing at a quicker rate than wages and salaries.

In July, fuel subsidies were removed and in October there was an increase in utility prices with electricity going up by 78.9 percent and water by 52 percent. November saw a 2.5 percent increase in value added tax to 15 percent.

“Given that situation, demand certainly outstrips supply. In the basic law of economics wherever demand outstrips supply, the price of the commodity will shoot up,” adds Kyei-Mensah-Bonsu, who is also an urban planner.

“It is not as if anyone wants it that way, but it is the reality of the times.”

In 1963 a rent control act was first passed to protect tenants from unfair evictions and high rents. In July, members of parliament called on the assembly to amend the act in accordance with the current housing climate.

The move came after Salifu Ameen, MP for Wa East District in Upper West region, urged the government to initiate the national housing policy that aims to address the deficit and provide a range of housing units across the country as well as regulate prices. It has been in draft for seven years.

“For those in the middle, the new professional class, it makes your position more uncomfortable because yes now you’ve got that new white collar job and that car with air conditioning, but you can’t afford to live less than 35 to 40 minutes from your work,” Quaison points out. “You’re going to have to move further out because your rent and your living costs won’t equate to your salary.”

Practically unregulated, rents are left to the proprietor to set accordingly. It is common for renters to have to cough up one to two years’ rent in advance. “It has become a convention,” Kyei-Mensah-Bonsu says.

According to Johnet Darpoh – whose family owns lower-cost units on the outskirts of Accra that they have been renting out for 30 to 40 years – landlords in any given area form an association and decide amongst themselves at what price to set their rents. Kyei-Mensah-Bonsu also notes that rental agents gauge how prices are faring in a given area and set rent accordingly, including their commission fee in the final price.

In the meantime Quaison’s search for a property continues, only this time with a larger budget, as she has experienced how quickly expenses can accumulate. The country’s irregular water flow means that one has to buy a back-up water tank and – if they can afford it – a generator for times of electricity load-shedding.

But those that cannot afford to pay such high rents are left at a loss.

“There are some people who can’t rent a place of their own. Some are staying with friends or in a family house with a lot of people in one room,” Darpoh tells IPS.

“[There are places] where people are sleeping outside, with their kids on the floor. If the government could help them it would be better.”

Until then, the city’s more modest and lower-income earners will lose out when it comes to finding decent housing.

“People with very low incomes mostly stay in either uncompleted buildings,” Osei says. “Or in a building that lacks water, electricity or a toilet.”