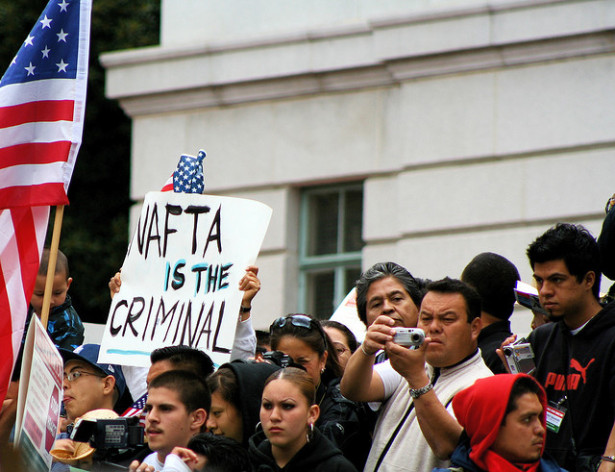 NAFTA has become an engine of poverty in the country, forcing millions of Mexicans to migrate to the United States in search of jobs. Credit: Jim Winstead/cc by 2.0

Of course, hundreds of thousands of U.S. jobs have vanished since automotive and tech companies moved their production across the border in search of much lower wages.

NAFTA not only decimated many Mexican small businesses, it also helped to destroy entire national industries.

This was supposed to boost employment in Mexico. Instead, NAFTA has become an engine of poverty in the country, forcing millions of Mexicans to migrate to the United States in search of jobs.

Why? Under NAFTA, cheap subsidised corn from the United States flooded Mexico, making it impossible for millions of Mexican farmers to compete. Government support previously given to small farmers was withdrawn and directed to big agricultural exporting corporations instead.

Still, even with hard times in the countryside, the trade deal’s architects promised that Mexico would industrialise. That transformation would, according to the promises that propelled NAFTA two decades ago, generate job growth.

Unfortunately, most factories that opened in Mexico are merely assembly plants, not production sites.

Parts arrive from the United States, China, and other countries. Once assembled, the products are exported. Without much local or national content, these industries require fewer workers than locally based manufacturing plants, which closed down when they could not compete.

Adán Rivera, who leads an association of small and medium-sized companies in Mexico, points out that because NAFTA caused “the destruction of thousands of small productive units,” it has resulted in “the elimination of millions of jobs.”

NAFTA not only decimated many Mexican small businesses, it also helped to destroy entire national industries. Before NAFTA, Mexico produced trains, tractors, and other industrial goods. They generally weren’t exported, but that production made the economy more self-sufficient.

Many of these industries have wasted away. During the 2008 financial crisis, Mexico’s economy shrank 6.6 percent — Latin America’s steepest decline — because of its chronic dependence on the U.S. market.

Meanwhile, Mexican consumption of U.S. goods has skyrocketed, with Mexicans shopping in big box stores like Walmart and Costco. At these stores, even food items emblematic of Mexico like tortilla chips and salsa are brought in from the United States.

The result? Millions of small-scale producers, mom and pop shops, and other traditional Mexican employers were scrapped, and the national diet went downhill. The gusher of processed foods and beverages from the North has made Mexico the world’s most obese nation, with diabetes its top cause of death.

Not everyone is a loser, of course. Mexico boasts the richest man in the world, Carlos Slim — who amassed his fortune from privatisation schemes related to NAFTA. Mexico’s economic elite, with its wealth securely deposited in banks in the United States and elsewhere, finds a lot to like in NAFTA.

But for the rest of the population, Mexico’s experience with NAFTA shows why free trade and investment deals are bad not only for America’s working families, but for working families all over the world.

That’s why the wide-ranging Trans-Pacific Partnership President Barack Obama is now championing faces growing global resistance. After 20 years of NAFTA, the predictions we made that the agreement would cause massive social problems have proven true. It’s become clear that these pacts can hurt people in every possible way.

Manuel Pérez-Rocha is an Institute for Policy Studies associate fellow. This article originally appeared on Other Words.