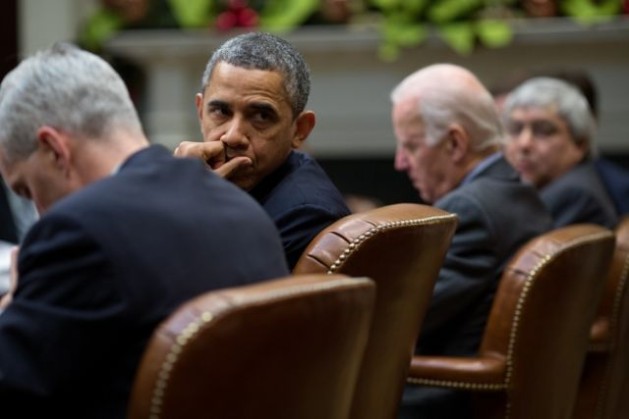 WASHINGTON, Jan 3 2014 (IPS) - If U.S. President Barack Obama conceived his foreign policy prospects for 2014 as a popular child’s board game, the snakes he will have to jump over significantly outnumber the ladders that can propel him to success.

As they have since he took office five years ago, the most dangerous “snakes” lie in the Middle East, the region from which Obama has been trying desperately to climb out of the many holes dug by George W. Bush so that he could focus Washington’s attention more on Asia and, specifically, dealing with the rise of China.

Navigating the increasingly rocky shoals of interstate relations in Asia is also likely to become more slippery in the New Year.

And while he successfully avoided (with the improbable help of Russian President Vladimir Putin) direct military engagement in Syria in 2013, the spill-over from the civil war there into Iraq and Lebanon – not to mention growing instability and violence in Egypt and the possibility and implications of a breakdown in nuclear negotiations with Iran – poses major new risks in 2014.

But navigating the increasingly rocky shoals of interstate relations in Asia is also likely to become more slippery in the New Year.

In contrast to the Middle East, where sectarian conflict between Shia and Sunni Muslims increasingly transcends national borders, nationalism appears all too alive and well in Asia.

Beijing’s increasingly assertive territorial claims, which have generally worked to Washington’s advantage as less powerful nations have sought a counter-balance to China’s growing power, have nonetheless also increased the risk of an incident that could, if unchecked, escalate into a conflict involving U.S. forces.

In addition, they have also triggered a backlash that, among other things, appears to have emboldened Japanese Prime Minister Shinzo Abe to accelerate his country’s move away from its post-World War II pacifism.

Abe’s defence of Japanese actions in World War II – as demonstrated most provocatively by his recent visit to the notorious Yasukuni shrine – has in turn angered South Korea. As a result, Washington’s efforts to coordinate policy on both China and an increasingly unpredictable nuclear-armed North Korea with its two closest allies in Northeast Asia have come to naught.

Of course, if Obama can patch up relations between Tokyo and Seoul and make progress in gaining Chinese agreement on “rules of the road” in contested zones, his standing would rise. But, given the nationalist passions that are roiling the region, that task will not be easy, and the downside risks there are steadily growing.

The overriding importance accorded by the administration to both the Greater Middle East and Asia means that Latin America and sub-Saharan Africa are likely to continue to get relatively much less attention from Washington during 2014, as they have for the past five years.

However, specific crises – most recently, the violence and possibility of civil war in South Sudan – can rise to the top of the foreign policy agenda.

But Obama has little to gain from the situation – even if his diplomats succeed in helping prevent the worst. On the other hand, if the world’s youngest nation self-destructs, the president stands to lose, not only because of his personal investment in helping to gain Juba’s independence, but also because he would be compared unfavourably with Bush, one of whose few foreign-policy achievements was the negotiation of the 2005 peace agreement between Sudan and the Sudanese Peoples Liberation Army (SPLA) that laid the groundwork for independence.

While the greatest number of overseas “snakes” facing Obama in 2014 remain in the broader Middle East, it’s also the region where a couple of “ladders” – both singled out by Obama himself in his speech to the U.N. General Assembly in September – could ensure his place in history as a successful foreign policy president.

The most spectacular would be the successful conclusion of a comprehensive nuclear accord with Iran in the context of the P5+1 (U.S., Britain, France, China, and Russia plus Germany) negotiations that could effectively reverse recent advances made by Tehran in building a break-out capacity and still permit it to enrich uranium at low levels.

Negotiating such an agreement would not only go far in ending 35 years of hostility between the two nations. It could also facilitate their cooperation in both tamping down the Sunni-Shia conflict that threatens the entire region and stabilising Afghanistan, from which virtually all U.S. combat troops are supposed to withdraw by the end of 2014.

While its strategic significance would not rise to that of Richard Nixon’s rapprochement with China in the early 1970s, an Iran accord could presage major realignments stretching from the Mediterranean to the Indian Ocean and deep into Central Asia.

To achieve it, however, Obama faces formidable opposition, primarily from Israeli Prime Minister Benjamin Netanyahu and the Israel lobby that wields considerable influence in Congress, as well as from Saudi Arabia and some other Gulf states which fear Tehran will regain the regional primacy it enjoyed under the Shah in the 1970s. Like the Israel lobby here, hard-liners in Iran also oppose an accord.

If these forces succeed, the consequences, as Obama himself has warned, could very likely include yet another U.S. military intervention in the Middle East.

That in turn would not only put paid to Obama’s hopes of reducing Washington’s military presence in the region and “pivoting” toward Asia. Lacking U.N. Security Council authorisation, such an action would also almost certainly provoke a major international crisis that could shatter cooperation with Russia and China on a host of issues, as well as strain U.S. relations with its NATO allies.

For Obama, war with Iran – even more than the escalating Sunni-Shia conflict in Syria and its neighbours — is probably the most dangerous “snake” on the 2014 board.

The other obvious “ladder” that could earn Obama a favourable place in the annals of foreign policy is negotiating a final settlement of the Israeli-Palestinian conflict, the elusive holy grail of U.S. Mideast policy for more than a generation.

While most analysts express doubt over whether this goal is possible – and is most unlikely to be achieved in 2014 in any case – the energy with which Secretary of State John Kerry has pursued the effort has impressed some sceptics, and the fact that he is now offering bridging proposals for a permanent status agreement marks a potentially significant advance.

Still, the balance of opinion here is that such an accord is a bridge too far, especially so if Obama succeeds in getting a nuclear agreement with Iran.

Meanwhile, however, the “snakes” in the region that threaten Obama are considerably more numerous, ranging from an escalating cycle of violence between the military regime in Egypt and the Muslim Brotherhood or more radical forces, to the resurgence of sectarian violence in Iraq to 2006-07 levels; from the intensification of the war in Syria or its export to Lebanon, to the strengthening of Al Qaeda-linked forces across the region from Yemen to North Africa and the Sahel, to name a few.

And, with 2014 the year in which NATO is to withdraw all but a small remnant from Afghanistan, the site of Washington’s longest war, a rapid collapse of security could prove similarly deadly, recalling the Vietnam debacle nearly 40 years ago.

Any and all of these distinctly possible events will no doubt be used by Obama’s political foes here to paint him as a failed foreign policy president.