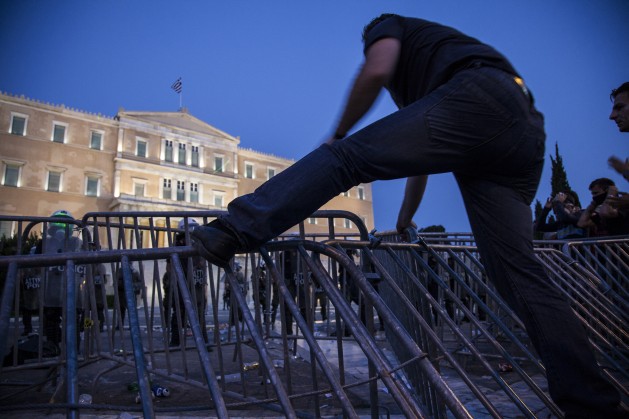 A Greek protester takes a step against austerity measures at a barricade in Athens. Credit: Infowar Productions/IPS.

ATHENS, Feb 19 2014 (IPS) - A humanitarian crisis is unfolding in Greece and other recession-hit European countries as they undergo harsh austerity measures in exchange for a bailout. At the heart of it is the Troika, say trade unions, civil society and rights activists.

“The Troika ought to know now that they can’t hide any more behind their immunity in order to avoid Greek courts for the violations of human right in this country.”

It is increasingly being accused of demanding economic reforms that have driven insolvent countries in South-Eastern Europe into deep recession while undermining human rights.

The International Federation for Human Rights has completed a fact-finding mission in Greece aiming to assess the impact of the crisis on human rights and outline the need to hold accountable those responsible for violations.

“Our visit was aimed at collecting evidence that the austerity measures and structural reforms which the government has had to implement as a condition for bailout have led to a situation where not only economic and social but also civil and political rights and the very democratic foundations on which the state is built are under threat,” Elena Crespi, Western Europe programme officer with the Federation, told IPS.

“Our ultimate goal is also to warn against the risk that what started as a global economic crisis would turn into a global human rights crisis, whose effects can easily be foreseen but might be very hard to contain,” she said.

On Jan. 21, 20 trade unions, human rights and civil society organisations throughout Europe addressed Martin Schultz, President of the European Parliament, asking him to commission a report on the situation of human rights, the rule of law, and democracy in Greece.

“Reading the Charter of Fundamental Rights of the EU, it is hard to find a single article that has not been violated by the Greek government during the last three years as part of the policies it has implemented against its own people,” the letter said.

Greece has borrowed about 230 billion euros (315 billion dollars) in the last four years in exchange for a massive austerity programme overseen by the Troika. The policy has backfired, with the economy sinking into unprecedented recession and unemployment soaring to 30 percent.

Signatories to the letter included the European Association for the Defence of Human Rights (AEDH), an umbrella organisation of 30 groups in 22 EU member states, major Greek trade unions, the 167,000-strong Belgian private sector union CNE as well as smaller political and civil society organisations, including the European Attack Network and the Corporate Europe Observatory (CEO).

CEO has launched a new project called Troika-Watch, which aims to create a network of citizens to monitor the body that represents creditors in counties implementing austerity programmes. This will produce a monthly newsletter in nine different European languages.

A resolution proposed by the Committee of Legal Affairs and Human Rights (PACE) was adopted on Jan. 31 by the Parliamentary Assembly of the Council of Europe.

According to the Assembly, “member states should also be held responsible for the role they play in international organisations and by assisting them in implementing their decisions.”

Greek MP Notis Marias, a representative of the Anti-Federalist Democrats group in the Council of Europe, who has proposed some of the amendments, said, “The Troika ought to know now that they can’t hide any more behind their immunity in order to avoid Greek courts for the violations of human right in this country.”

Basic wages have reportedly gone down 22 percent since the austerity measures began, unemployment among the youth is over 60 percent and over one million people do not have any kind of medical insurance any more.

In June 2013, the IMF admitted mistakes in handling the Greek debt crisis that caused the recession scenario to deteriorate. But the Troika never produced an impact assessment report prior to requesting social reforms and fiscal measures.

Andreas Fischer-Lescano, professor of European law and politics at the University of Bremen, was appointed by the European Trade Union Confederation to examine the legality of memorandums of understanding (MoUs) signed between bailed out countries and their lenders. His conclusions came out at the end of January.

In a draft document, seen by IPS, Fischer-Lescano argued that “it is the Commission and the ECB which on behalf of Europe lay down the conditions that are driving millions of Europeans to despair.

“The legal struggle against austerity is just beginning. The aim must be to defend core principles of social justice in Europe.”

The Greek Council of State has already found unconstitutional an emergency property tax passed in Greece in 2011.

On Jan. 28, the special committee of inquiry appointed by the Economic and Monetary Affairs Committee of the European Parliament to evaluate the role the Troika played in bailed out countries visited the Greek parliament. It had previously stopped by in Cyprus, Portugal and Ireland.

In Greece, the head of the committee admitted the Troika had committed mistakes but said it fulfilled its role to save the country from bankruptcy. The committee will publish its findings before the European elections in May.

By then a new strong brinkmanship is expected to evolve around the future of Greece’s fiscal consolidation programme, given that the credit put aside for the country is almost used up.

An extra 15 to 20 billion euros (20 to 27 billion dollars) will be necessary to keep the country afloat but many believe this will not come in the form of a new MoU.

Already a German proposal is taking shape that aims to lower interest rates and extend repayment terms for over 50 years.

Economists say through such measures the political elite are hoping to tame public opinion, which in creditor countries is unlikely to tolerate a new loan for bankrupt Greece and which in Greece is steadily moving towards anti-MoU and extreme right-wing parties.