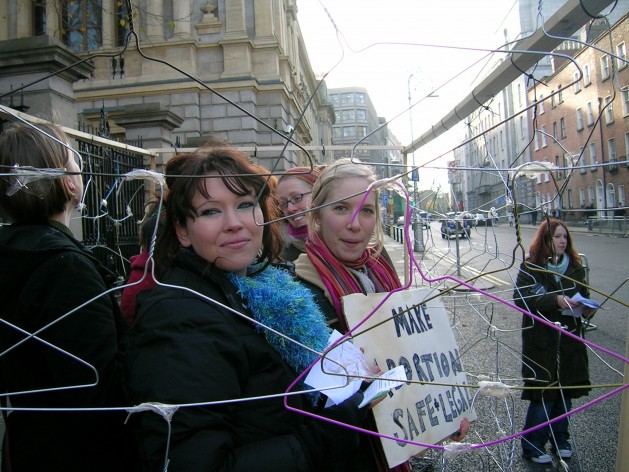 ROME, Apr 5 2014 (IPS) - Two out of three doctors in Italy are ‘conscientious objectors’ to abortion, according to new data. The Italian Ministry of Health reveals that in 2011, 69.3 percent of doctors refused to carry out abortions, with peaks of over 85 percent in some regions.

In the face of such numbers, the ruling of the European Committee of Social Rights of the Council of Europe against Italy earlier this month over a complaint for violating the right to protection of health came as no surprise.

“Many doctors object simply because they have nothing to gain from doing this extra work.”

“The Italian situation really worries us, and this is why we filed the complaint,” Irene Donadio, advocacy officer at the International Planned Parenthood Federation European Network (IPPF_EN) told IPS. “We believe that there is a problem with the functioning and application of the abortion law, which, in fact, would be a good law but is often violated.

“We acknowledge the fact that the right to conscientious objection is included in the same law, but the right of women to access a service that is legal and fundamental for their health needs to be respected as much as this right.”

IPPF_EN sees the high number of conscientious objectors in Italy as the main cause behind refusal of women’s right to termination of pregnancy.

IPPF_EN, with the help of several Italian associations, presented to the Committee a scenario of never-ending waiting lists and arbitrary suspensions of the service. It listed many instances where women were forced to travel for abortions within the country or to go abroad.

“According to data from the Ministry of Health, the number of voluntary interruptions of pregnancy per year is around 110,000,” Giuseppe Noia, president of the Italian Association of Catholic Gynaecologists Obstetricians (AIGOC) told IPS.

“If we consider that there are about 1,500 non-objecting physicians, each physician carries out around 74 abortions per year, that is an average of five or six per month. The fact that non-objectors are overloaded and cannot guarantee an efficient system is therefore absolutely false,” Noia said.

In its response to the Council, the Ministry had said that due to a decline in abortions, “the workload for non-objecting doctors was cut by half in the last 30 years” and therefore “it appears difficult…to maintain that the high number of conscientious objectors would be an obstacle for accessing the interruption of pregnancy.”

The ministry’s note does not elaborate on the geographical distribution of objectors across the country. This is what, according to the Council of Europe, creates a disparity in treatment depending on where the woman seeking an abortion resides.

In the southern region of Basilicata, according to official data, 85.2 percent of physicians are conscientious objectors, in Apulia they account for 79.4 percent of the total, and in Sicily 81.7 percent.

“The situation is generally worse in the South, but also Lombardy [in the north bordering Switzerland] has serious problems, and we know that this is because is a not very laic region,” Silvana Agatone, president of  the Free Italian Association of Gynaecologists for the Application of Law 194 (LAIGA) told IPS. Law 194 is the law that regulates abortion in Italy.

The decrease in abortions claimed is subject to different interpretations. The ministry maintains that this is due to “the promotion of a higher and more efficacious recourse to conscious procreation.” But Marilisa D’Amico, a lawyer who was involved in presenting the complaint, says that the increase of cases of spontaneous abortions, or miscarriages, “can only be explained as an increase of clandestine abortions” presented as miscarriages. There were less than 57,000 such abortions in 1990, 68,000 in 2000 and more than 76,000 in 2011, according to ISTAT.

The official figures show a constant increase in the number of miscarriages through recent years.

LAIGA provided a list of 45 hospitals that have a gynaecology unit but do not perform terminations of pregnancy, disregarding Article 9 of the Italian law on abortion. This article states that hospital establishments and authorised nursing homes shall ensure that procedures for the termination of pregnancy are guaranteed.

Clandestine abortions continue to take place, says Massimo Srebot, head of the department of obstetrics and gynaecology at the Lotti Hospital of Pontedera in Tuscany region, the first structure in Italy to introduce RU-486, a pill that blocks the action of the hormone progesterone in order to cause abortion without surgical intervention.

“Women who find obstacles in public hospitals seek alternative channels with physicians who, upon receiving a bribe, are willing to simulate a spontaneous abortion. These are conscientious objectors only when they have to work for free. They turn a blind an eye to their conscience in their private clinics.”

Srebot says “many doctors object simply because they have nothing to gain from doing this extra work.” Also, “carrying out abortions doesn’t help a doctor’s professional career because it is not a high-level specialisation operation.”

Srebot has proposed new solutions to ensure the respect of Law 194. One option would be to nominate a non-objector as a sub-head physician for every public hospital.

“I truly respect the real conscientious objectors, but there are those who speculate on women’s difficult situations, they don’t sustain them, they don’t help them preventing further incidents, they only wait for them to get pregnant again, so they once again cash in.”