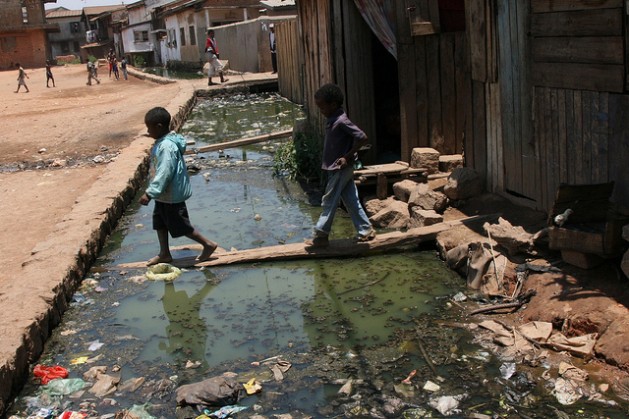 WASHINGTON, Apr 12 2014 (IPS) - World leaders on Friday discussed plans to expand sustainable access for water, sanitation and hygiene, focusing in particular on how to reach those in remote rural areas and slums where development projects have been slow to penetrate.

The meeting, which took place amidst the semi-annual gatherings here of the World Bank and International Monetary Fund (IMF) could be the world’s largest ever to take place on the issue.

"Ministers are much happier to talk and support a hydro project, like a huge dam, and are less happy to open up a public latrine." -- Darren Saywell

Water, sanitation and hygiene, collectively known as WASH, constitute a key development metric, yet sanitation in particular has seen some of the poorest improvements in recent years.

“Today 2.5 billion people do not have access to clean water, sanitation and hygiene,” the World Bank’s Kim said Friday. “This results in 400 million missed school days, and girls and women are more likely to drop out because they lack toilets in schools or are at risk of assault.”

Kim said that this worldwide lack of access results in some 260 billion dollars in annual economic losses – costs that are significant on a country-to-country basis.

In Niger, Kim said, these losses account for around 2.5 percent of gross domestic product (GDP) every year. In India the figure is even higher – around 6.4 percent of GDP.

Friday’s summit was convened by UNICEF.

“UNICEF’s mandate is to protect the rights of children and make sure they achieve their full potential. WASH is critical to what we hope for children to achieve, as well as to their health,” Sanjay Wijesekera, associate director of programmes for UNICEF, told IPS.

“Every day, 1400 children die from diarrhoea due to poor WASH. In addition, 165 million children suffer from stunted growth, and WASH is a contributory factor because clean water is needed to absorb nutrients properly.”

Over 40 countries came to the meeting to share their commitments to improving WASH.

“Many countries have already shown that progress can be made,” Wijesekera said. “Ethiopia, for example, halved those without access to water from 92 percent in 1990 to 36 percent in 2012, and equitably across the country.” 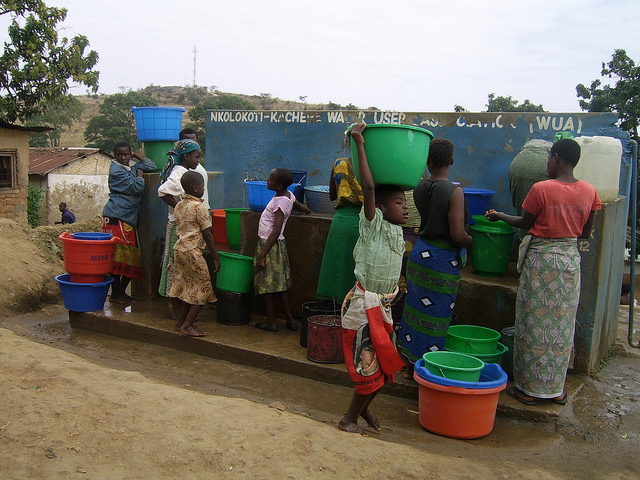 Indeed, the Millennium Development Goal (MDG) for water halved the proportion of people without access to improved sources of water five years ahead of schedule. Yet the goal to improve access to quality sanitation facilities was one of the worst performing MDGs.

In order to get sanitation on track, a global partnership was created called Sanitation and Water for All (SWA), made up of over 90 developing country governments, donors, civil society organisations and other development partners.

“Sanitation as a subject is a complicated process … You have different providers and actors involved at the delivery of the service,” Darren Saywell, the SWA vice-chair, told IPS.

“NGOs are good with convening communities and community action plans. The private sector is needed to respond and provide supply of goods when demand is created. Government needs to help regulate and move the different leaders in the creation of markets.”

In addition, sanitation and hygiene are not topics that can gain easy political traction.

“It is not seen as something to garner much political support,” Saywell says. “Ministers are much happier to talk and support a hydro project, like a huge dam, and are less happy to open up a public latrine.”

Saywell says that an important part of SWA’s work is to demonstrate that investing in WASH is a good economic return.

“Every dollar invested in sanitation brings a return of roughly five dollars,” he says. “That’s sexy!”

Friday’s summit covered three main issues: discussing the WASH agenda for post-2015 (when the current MDGs expire), tackling inequality in WASH, and determining how these actions will be sustainable.

“We would like the sector to the set the course for achieving universal access by 2030,” Henry Northover, the global head of policy at WaterAid, a key NGO participant, told IPS.

Although the meeting did not set the post-2015 global development goals for WASH, it was meant to call public attention to the importance of these related goals and ways of achieving them.

“Donors and developing country governments need to stop seeing sanitation as an outcome of development, but rather as an indispensable driver of poverty reduction,” Northover said.

The report says this imbalance in aid targeting is due to “geographical or strategic interests, historical links with former colonies, and domestic policy reasons”. Northover added to this list, noting that “donors are reluctant to invest in fragile states.”

“In India, despite spectacular levels of growth over the past 10 years, we have seen barely any progress in the poorest areas in terms of gaining access to sanitation,” he continued. “Regarding inequality, we are talking both in terms of wealth and gender: the task falls to women and girls to fetch water, they cannot publicly defecate, and have security risks.”

Others see funding allocation as only an initial step.

“Shift the money to the poorer countries, and then, so what?” John Sauer, of the non-profit Water for People, asked IPS. “The challenge is then the capacity to spend that money and absorb it into district governments, the ones with the legal purview to make sure the water and sanitation issues get addressed.”

Friday’s meeting also shared plans on how to use existing resources better, once investments are made.

“If there is one water pump, it will break down pretty quickly,” WaterAid’s Northover said. “This often requires some level of institutional capability for financial management.”

Countries also described their commitments to make sanitation sustainable. The Dutch government, for instance, introduced a clause in some of its WASH agreements that any related foreign assistance must function for at least a decade. East Asian countries like Vietnam and Mongolia are creating investment packages that also help to rehabilitate and maintain existing WASH systems.

“This is probably one of the biggest meetings on WASH possibly ever, and what we mustn’t forget is that the 40 or 50 countries coming are making a commitment to do very tangible things that are measurable, UNICEF’s Wijesekera told IPS. “That bodes well for achieving longer-term goals of achieving universal access and equality.”