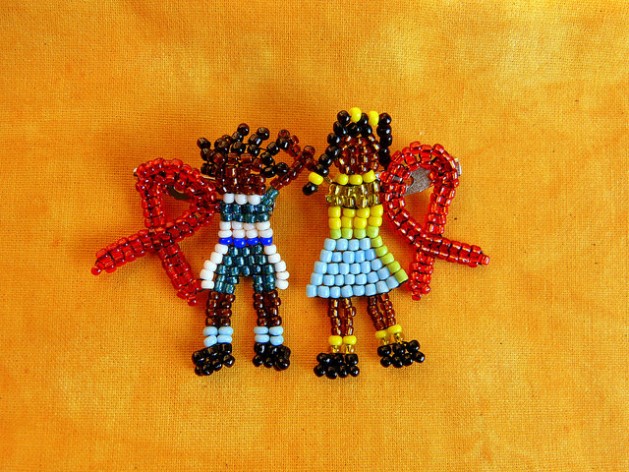 Many HIV positive teenagers struggle to disclose their status to their sexual partners. Credit: Mercedes Sayagues/IPS

KAMPALA, Apr 8 2014 (IPS) - Silence is golden, it is said. But not for Constance Nansamba* from Uganda, who paid a dear price for keeping silent about being HIV positive and pregnant at age 18.

“I was terrified. I ran away from my brother’s home. I could not follow the PMTCT [prevention of mother-to-child transmission] guidelines, so the baby is HIV positive,” she told IPS.

Nansamba knew she was born with the virus but, afraid of rejection, she did not tell her boyfriend. “We used a condom, he always complained, we abandoned the condom, I got pregnant.” Although he did not contract HIV from her, they broke up.

Nansamba, now 20, has found the courage to tell her story to help others. She is a member of Uganda Young Positives (UYP), an organisation that offers HIV counselling, testing and treatment adherence advice.

She told IPS that many teenagers born with HIV do not know their status when they start having sex, or they know but don’t tell their sex partners.

A survey by Uganda’s Mildmay Health Centre involving 200 adolescents receiving antiretroviral treatment found that 75 percent were not willing to disclose their HIV status to their sexual partners and 30 percent did not want to have protected sex.

“They simply don’t have information to guide them in negotiating disclosure, dual protection and consistent condom use,” said Nansamba. “I faced the same challenge because I would not discuss issues about sex with my elder brother, who was like my father.”

Nansamba’s parents died when she was a baby and her brother raised her.

HIV among the young

Uganda is a young country; nearly 80 percent of its 34 million people are below the age of 30.

National seroprevalence is 7.2 percent and, worryingly, is slowly rising. Among youth aged 15-24, five percent of women and two percent of men are HIV-positive, according to the Uganda AIDS Indicator Survey 2011.

Emmanuel Elwanu was 14 years old when he learned that he had been born HIV positive. Fearing discrimination, he struggled with telling his HIV negative friends. “I had to go through a lot of counselling before I could open up,” he told IPS.

Elwanu was lucky: his school had weekly counselling sessions around HIV and he joined the Reach Out Mbuya Parish HIV/AIDS initiative.

“Many of my HIV positive colleagues out there are going through really difficult times with relationships,” explained the 18-year-old Elwanu. “I think about sex, but it is not my biggest priority.”

Elwanu, whose parents died while he was a child, has decided to abstain from sex until completing his studies.

Polly Nuwagaba, a counsellor with the Naguru Teenage Information and Health Centre in Kampala, told IPS that most adolescents have a problem with disclosure.

“They look healthy, they attract HIV negative partners, and they have sexual desires,” she explained. “Some tell us that when they say they have HIV, those they tell don’t believe it, and they end up having unprotected sex.”

No condoms for teens

Dr. Sabrina Kitaka, an adolescent health specialist at Makerere University’s College of Health and Sciences in Kampala, notes the gap in health services for the youth.

“There are few designated adolescent-friendly outpatient health care facilities, while in-patient paediatric wards care for children up to age 12. So adolescents are typically admitted to adult wards,” said Kitaka.

In 2013, the World Health Organisation (WHO) warned that the failure to put in place effective HIV services for youth has resulted in a 50 percent increase in AIDS-related deaths among adolescents globally, compared with the 30 percent decline of such deaths in the general population from 2005 to 2012.

WHO asked governments to review their laws to make it easier for adolescents to obtain HIV testing without parental consent.

But Ugandan health officials are divided on whether teenagers should be offered family planning services and condoms.

Dr. Stephen Watiti, a physician who lives with HIV, observed that the laws and policies surrounding condoms and contraceptives for adolescents in Uganda are unclear and interpreted inconsistently. This makes it difficult for both youth and health staff to understand their options.

Officially, only those 18 and over qualify for family planning services and condom distribution. However, more than half of young women aged 18-24 had had sex before the age of 18, according to the 2011 Uganda Demographic and Health Survey.

“As clinicians, you cannot go to schools and promote condoms or contraceptives. But when you come across a 14-year-old who is sexually active, then you have no option but to teach them how to use condoms,” Watiti told IPS.

At the UYP meeting held in Kampala, the Ugandan capital, in late January, Nansamba told the young audience: “You guys, it is not easy to live with HIV. You will always feel guilty whenever you sleep with someone, but at the same time you have sexual desires that need to be fulfilled.”

Her decision these days is “to abstain [from sex] because I don’t want to put anybody at risk of HIV.”

But for many HIV positive teenagers, abstaining is not an easy option – and neither is disclosing their status or practicing safe sex.