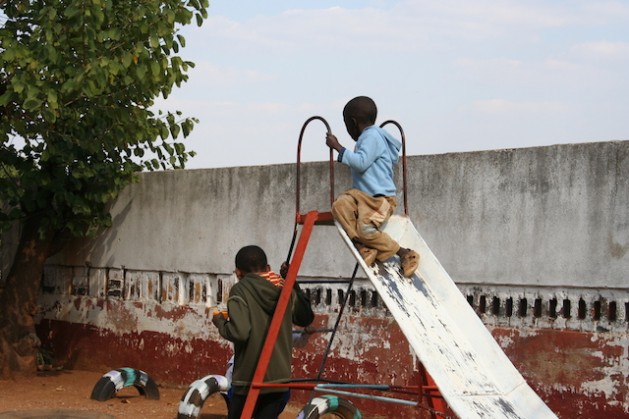 BULAWAYO, Apr 3 2014 (IPS) - Three years ago, Robert Ngwenya* and his father got into a heated argument over medication. Ngwenya, then aged 15, refused to continue swallowing the nausea-provoking pills he had been taking since he was 12 years old, and flushed them down the toilet.

During the argument, Ngwenya understood he had been born HIV positive, had been taking antiretrovirals (ARV) and not vitamins and anti-allergenics, and that his father too lived with the virus and the guilt of having infected him.

“This is unfair, what did I do to deserve this?” Ngwenya laments.

What l'd like is some of your affection
Not your pity, just some kind of attention
You think l'm worthless,
You don't even know me
It's not my fault that this
Blood flows through me.

I want you to know that we're just kids
Even though we were born with HIV
Prenatal, virgin contraction
The first of a fighting generation,
We fight against AIDS and discrimination
We're God-made, put there for a reason
It's time to change and now's the reason
Yes, we're special but we're no different

But in the Storm
We've learned how to dance"

Ngwenya lives in the high density suburb of Pumula in Bulawayo, Zimbabwe’s second city, with his father, a car mechanic, and his younger brother, who is HIV negative. His mother died when Nwengya was 10 and his father never remarried.

Ngwenya’s life was all planned: finish high school, get a degree in information technology, find a job and buy a car. Not any more. After the revelation, he is no longer the same outgoing teenager whose company brought smiles to friends and family.

“How do I tell my friends? How do I start a relationship knowing someone will have to carry my burden?” he asks.

Like Ngwenya’s father, other HIV positive parents, weighed down by guilt, find it hard to tell their children they were infected at birth.

How and who tells a child or teenager that they will live with the virus for the rest of their lives?

Thanks to ARV therapy, increasing numbers of HIV infected children are living to adolescence. In 2012, Zimbabwe had 180,000 children aged 0-15 and 1.2 million people aged 15 and above living with HIV, says the Joint United Nations Programme on HIV/AIDS (UNAIDS).

“As these children grow and surpass the immediate threat of death, the issue of informing them of their HIV status arises,” says a study on teenagers born with the virus in Zimbabwe.

Adolescents aged 16-20 interviewed for the study preferred to be told by health care workers at clinics, with the presence of family.

“Disclosure to this age group in a healthcare setting may help overcome some of the barriers associated with caregivers disclosing in the home environment and make the HIV status seem more credible to an adolescent,” reports the study.

Zivai Mupambireyi, a researcher with the Centre for Sexual Health and HIV/AIDS Research (CeSHHAR) and co-author of a 2013 study of HIV positive children aged 11-13 in Zimbabwe, told IPS that children prefer to learn about their HIV status at the clinic because they believe health workers give them more and better information than their carers.

Children reported that their carers delayed disclosure, concealed information and lied about the pills.

“Most of these children were looked after by non-biological carers, as their parents were the first generation of AIDS patients and died before ARVs,” Mupambireyi explains.

Whether it is parents overwhelmed by guilt or carers distressed by the enormity of the revelation, telling adolescents they are HIV positive is fraught with pain and ambivalence.

Mupambireyi found that HIV positive children believe that disclosing to peers will expose them to discrimination. Although this often was not the case, fearing a loss of social interaction and friendship, children hide their HIV status.

“Although HIV status disclosure is noble and recommended, children’s concerns and fears around disclosure must be addressed before they are encouraged to disclose,” says Mupambireyi.

Health workers, parents and educators are tongue-tied as to the timing and best method of disclosing HIV status to youth.

Definate Nhamo is the coordinator of Shaping the Health of Adolescents in Zimbabwe (SHAZ), a research and intervention project. One offshoot, SHAZ for Positives, reaches more than 700 youth living with HIV in Chitungwiza, a suburb of Harare, the capital.

Nhamo told IPS that the best age to disclose HIV status is probably around nine or 10 years, before puberty, and preferably in the presence of parents, guardians or a counsellor.

“When the child is younger, she is trusting, and will grow up knowing she must take the ARVs religiously,” says Nhamo.

SHAZ for Positives members agree that knowing their status early helps kids accept their condition and learn to be open about it, Nhamo told IPS.

Some adults tell children the ARV pills are for tuberculosis, without realising that children can google it. “Teenagers just stop taking their ARVs and do not tell their parents because they feel they are more informed since they have access to the internet,” observes Nhamo.

A young female participant in the SHAZ study, who did not want to be identified, tells IPS that her mother, distressed at having infected her, never told her the truth. At age 17, the girl took a routine HIV test and tested positive. Since she had never had sex, she confronted her mother and learned that her two siblings were HIV negative but she had been born positive.

“I was angry and frustrated. If my mother had told me earlier, I could have accepted my status better,” she says.

Zvandiri, meaning “what I am” in the Shona language, is a support group that helps adolescents deal with HIV.

In 2013, Zvandiri produced a catchy song and DVD, How to Dance, with cool young people spiritedly belting out their hopes and fears: “I too have dreams of a better life, that someone will love me as I am.”

They sing, “how to dance in the storm”.

* Not his real name