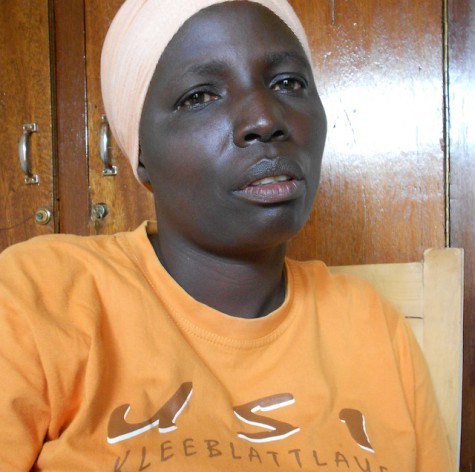 Claudine Umuhoza a survivor of Rwanda’s genocide believes that the country has a positive and united future. Credit: Fabíola Ortiz/IPS

KIGALI, Apr 11 2014 (IPS) - Claudine Umuhoza’s son turned 19 this Apr. 1. And while he may be one of at least thousands of children who were conceived during the Rwandan genocide, he’s not officially classified as a survivor of it. But his mother is.

Two decades after the massacre — during which almost one million minority Tutsis and moderate Hutus lost their lives — most Rwandans are still coping with the trauma of the violence. Most affected are the women who have children born of genocidal rape. It is estimated that between 100,000 and 250,000 women were raped in Rwanda during the genocide.

"The future of Rwanda will be better, people will be united. That doesn’t mean that people will have forgotten they are Tutsi or Hutu." -- Claudine Umuhoza, genocide survivor

Umuhoza, who lives in Gasabo district, near the Rwandan capital, Kigali, was only 23 when a plane carrying Rwandan President Juvenal Habyarimana and his Burundian counterpart, Cyprien Ntaryamira, was shot down over Rwanda’s capital Kigali on Apr. 6, 1994.

During the conflict that ensued she was raped by seven men — one of whom stabbed her in the stomach with a machete. She was left to die, lying on the floor.

Umuhoza survived only because a Hutu neighbour helped her escape to safety and gave her a fake Hutu identity card.

“The neighbour who saved my life is no longer in Rwanda, his family went to Mozambique. I’d like to say thank you for saving me. I would have died if it was not for him,” she remembered.

She lost four brothers and other family members in the massacre.

Now 43, Umuhoza is infected with HIV and has not yet told her son the origins of his birth.

“I have not being able to disclose to my son how he was born. My son doesn’t know. I got married in September 1994, after the genocide ended.

“I was pregnant when I married and after giving birth my husband realised the child born was not his. He didn’t accept this and as a result he left home,” she told IPS.

According to Jules Shell, the executive director and co-founder from Foundation Rwanda, even though this Central African nation has made great strides in rebuilding the country, women who were infected with HIV as a consequence of rape still face severe stigmatisation.

The U.S.-based NGO was established in 2008 and began supporting an initial cohort of 150 children born of rape with their schooling in 2009.

“A disproportionate number of the women who were raped were also infected by HIV,” Shell told IPS, explaining that the exact infection rate was not known but it is estimated that 25 percent of the country’s women are living with HIV.

According to the government, women comprise the majority, 51.8 percent of this country’s population of 11.5 million. However, antiretroviral treatment only became widely available here 10 years ago and is accessible through the national healthcare system.

“We will never know the true number of children born of rapes committed during the genocide.

“As many women are afraid, unable, or understandably unwilling, to acknowledge the circumstance of their children’s birth … we will never know the true number,” Shell said.

The consequences of the genocide still affect the youth who were born after it.

“Many of the young people are experiencing a phenomena common to the children of Holocaust survivors, known as the ‘intergenerational inheritance of trauma’.

“This has resulted from the inability of mothers to speak openly to their children about their experiences and own trauma, which in turn affects them,” explained Shell.

Like Umuhoza, many other women still have not publicly acknowledged that their children were born of rape, though their children are aware that they have fathers who are unknown to their mothers.

This also creates problems for these children when they try to register for national identity cards, which requires the identification of both names of father and mother.

But thanks to Foundation Rwanda, Umuhoza’s son is about to finish high school — something she did not have the opportunity to do. Umuhoza is one of  600 mothers currently supported by Foundation Rwanda, which also provides fees and school material for their children.

“I am very happy that my son is in secondary school. One thing that I pray to god for is to see my son in school … and I have a hope that he will be able to go to university.

Preventing another genocide
There are over 3,000 volunteers in the country using various strategies to bring about reconciliation such as community dialogue, community works, poverty-reduction activities and counselling.

Richard Kananga, director of Peacebuilding and Conflict Management department at the National Unity and Reconciliation Commission, said that another genocide could occur if national authorities do not promote inclusive and reconciliation to bring people together.

“Through community dialogues people are being able to talk to one another. Talks have helped to reduce the suspicion promoting trust and healing,” he said.

“It is very important for me. I know it is expensive, but I didn’t even think that he would attend secondary school. So doors may open suddenly. I have hope,” she trusted.

Her dream is that her son becomes a lawyer to advocate for poor and marginalised people. However, he has dreams of his own and wants to become a doctor.

“He always sees me going for treatment and feeling a lot of pain and he dreams about being able to treat me,” she explained.

Because of her ill health and the severe stomach pains caused by the machete wound, Umuhoza is only able to perform light housework.

As a survivor she receives medical treatment from the Government Assistance Fund for Genocide Survivors (FARG) — to which the government allocates two percent of its national budget.

And on Apr. 15 she will undergo an operation to repair her wounds in the military hospital in Kigali.

Twenty years after the genocide, the country has not been able to forget its past, remarked Shell. She explained there is still stigma and discrimination against Tutsis, particularly in rural and isolated areas where they are very much a minority.

According to the National Unity and Reconciliation Commission (NURC) survey, at least 40 percent of Rwandans across the country say they still fear a new wave of genocide.

“Suspicion is still there. Trauma is still an issue. We still have recently-released prisoners who are now in society but not integrated yet,” Richard Kananga, director of the Peacebuilding and Conflict Management department at the NURC, told IPS.

The NURC was created in 1999 to deal with aspects of discrimination among local communities and lead reconciliation in Rwanda.

According to Kananga, reconciliation is a continuous process.

“We can’t tell how long it will take, it’s a long-term process. We have researchers to measure how people perceive this process of human security in the country. We cannot say that in 20 more years we’re going to reach 100 percent [of people who feel secure],” he said.

The children born after the genocide may represent a dark period of Rwanda’s history, but, according to Shell, they also represent the “light and the hope for a brighter future.”

Umuhoza believes it too.

“I have hopes that the future for Rwanda will be good. Comparing how the country was 20 years ago and how it is today. I wish for unity and reconciliation.

“The future of Rwanda will be better, people will be united. That doesn’t mean that people will have forgotten they are Tutsi or Hutu. Rwandans will still know who they are,” said the mother.