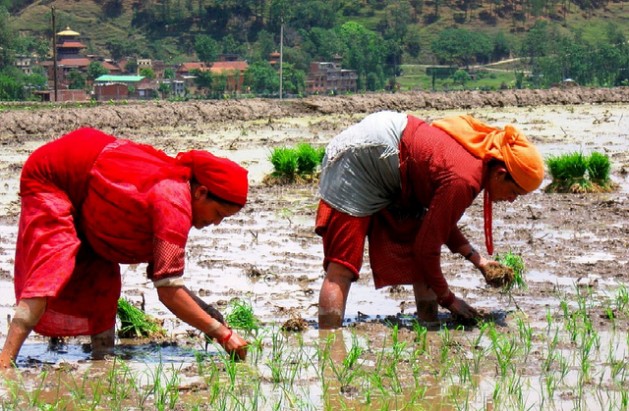 Important food crops will contain lower levels of zinc and iron by mid-century without major cuts in CO2 emissions from burning fossil fuels, an analysis of field experiments conducted on three continents has found.

“Higher levels of CO2 helps plants grow faster but it is mainly in the form of increased starch and sugars." -- David Wolfe

Deficiencies of zinc and iron have wide range of impacts on human health, including increased vulnerability to infectious diseases, anemia, higher levels of maternal mortality, and lowered IQs.

Myers and colleagues assessed new data from 143 experiments growing crops at CO2 levels that are 100 percent greater than the pre-industrial average. At current emission rates, CO2 in the atmosphere will be 100 percent greater around the year 2060. Wheat grown at those concentrations has 9.3 percent lower zinc and 5.1 percent lower iron than those grown at today’s CO2 concentration.

“We found significant effects from higher CO2 for all of these crops but some cultivars [seed varieties] did better than others,” he said.

The nutrition content of many food crops has already declined over the past 100 years, Myers acknowledged. One reason is that plant breeders have favoured rapid growth and yield while ignoring nutrition. Add to this the reality that CO2 levels today are 42 percent higher than 150 years ago.

“Higher levels of CO2 helps plants grow faster but it is mainly in the form of increased starch and sugars,” said David Wolfe, a professor of plant and soil ecology at Cornell University in New York State.

“There’s more carbohydrates [starch and sugar] but less protein, nutrients and other effects,” Wolfe told IPS. Wolfe was not involved in the Harvard study.

This is resulting in what some call “hollow food”, that is, food with insufficient nutrition. It is suspected of playing a role in the rapid rise in obesity, as people may be eating more in order to get the nutrition they need, said Ken Warren, a spokesman with The Land Institute, an agricultural research centre in the U.S. state of Kansas.

Crops take minerals, trace elements and other things from the soil every year. All that modern agriculture puts back into the land are some chemical fertilisers which do not replace all that has been lost, Warren previously told IPS.

A 2006 analysis of British government nutrition data on meat and dairy products revealed that the mineral content of milk, cheese and beef had declined as much as 70 percent compared to those from the 1930s. Parmesan cheese had 70 percent less magnesium and calcium, beef steaks contained 55 percent less iron, chicken had 31 percent less calcium and 69 percent less iron, while milk also showed a large drop in iron along with a 21 percent decline in magnesium.

Copper, an important trace mineral (an essential nutrient that is consumed in tiny quantities), also declined 60 percent in meats and 90 percent in dairy products.

Modern high-yielding crops and intensive farming methods were believed to be responsible, according to The Food Commission, an independent watchdog on food issues that published the study.

The measured impacts of high levels of CO2 on food crops in the Harvard study did not replicate the higher temperatures and extreme weather conditions expected mid-century. Other studies have shown that high temperatures stress plants and while the extra CO2 results in larger plants their yield was much lower, said Cornell’s Wolfe.

Growing food will be much more challenging with climate change, especially in California, the Southwest and parts of the Great Plains, according to the U.S. government’s National Climate Assessment released Tuesday.

Four years in the making, the assessment is the definitive scientific statement of current and future impacts of carbon pollution on the United States.

The projected increase in temperatures will dry out soils, making it impossible to grow food without extensive irrigation. The entire region is already in a decade-long drought that is likely to worsen. Warmer temperatures also increase evaporation rates, drying out soils even more and making irrigation less effective. Groundwater resources are also in serious decline throughout the region.

“California and the Southwest face huge water challenges,” said Wolfe, one of the 300 scientists who contributed to the assessment.

“California has the perfect climate for growing food right now but it won’t if gets hotter,” he said.

There is little doubt California and the rest of the U.S. will get hotter unless CO2 emissions decline there and around the world. While the western half of the U.S. gets drier the eastern half, and particularly the Northeast, will get heavier rains and more flooding.

The Northeast will see increasing droughts in the summer. But when the rains come it will be in form of deluges, Wolfe said. Over the past decade the region has experienced wildly erratic winter weather. In 2012, an extremely warm winter allowed fruit crops to bloom four weeks early, only to later have a hard frost that killed the blooms, resulting in losses amounting to hundreds of millions of dollars.

“Unpredictability is the biggest challenge for farmers,” Wolfe said.

He added that he’s an optimist but sees a future with higher food prices, beyond what the poor can afford, and a great deal of disruption in farm communities. U.S. farmers are going to need help to adapt, in terms of education and funding.

“We have to get beyond crop insurance. Change is risky for farmers and many don’t have the funds to adapt to what is coming.”