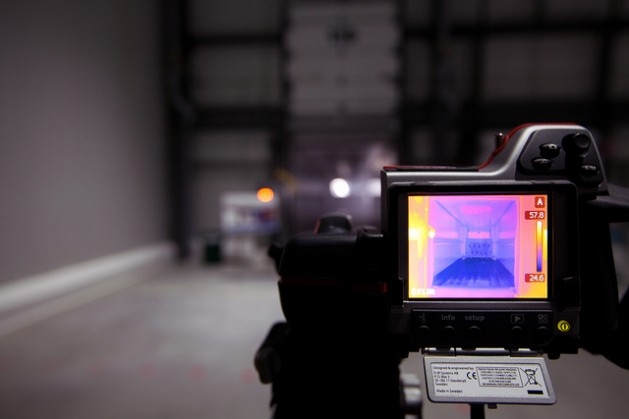 At its Balzac Fresh Food Distribution Centre, Walmart uses infrared scanning technology to identify areas where energy can be lost to the environment and uses the information to improve the insulation performance of building penetrations, door seas, dock plates and air curtains. Credit: Walmart/cc by 2.0

Employing existing energy-savings technology could reduce electricity demand by 25 percent. That’s like shutting down 494 power plants by 2030, according to a new report by the American Council for an Energy-Efficient Economy (ACEEE).

Programmes aimed at helping customers save energy cost utilities only about three cents per kilowatt hour, while generating the same amount of electricity from burning coal or natural gas can cost two to three times more.

“Americans’ energy bills will be lower and that will boost local economic growth,” said the study’s lead author, Sara Hayes.

That’s nearly as much as Canada’s annual emissions, which are among the highest in the world.

“We were very conservative in our study. The benefits could be far greater,” she said.

The health and environmental cost savings from reducing air pollution were not part of the study.

“Those savings would blow the other savings right out of the water,” Hayes added.

What will it take to bring all this about at no net cost? Strong public support for a regulatory standard under the U.S. Clean Air Act to set a CO2 emission limit on existing power plants. The U.S. Environmental Protection Agency (EPA) is currently preparing a draft regulation that will be made public Jun. 1.

States would enforce the new CO2 reduction target for existing power plants and it is important that the EPA ensure that energy efficiency is a way to meet it, said Hayes.

The study, Change is in the Air, shows how the EPA could use four common energy efficiency policies to allow states flexibility to meet the reduction targets.

These policies have been thoroughly tested and many states already take advantage of some end-use energy efficiency programmes and policies. All states have vast untapped reserves of this resource, the study found.

The U.S. leads the world in wasting energy, other studies have also shown. This is costly, amounting to an estimated 130 billion dollars per year, according to the Alliance to Save Energy.

In one small community programme in the state of Massachusetts, families saved more than 10 million dollars in electric and gas bills in 2012. All it took was information on household energy use, neighbourhood benchmarks and advice about how to use less energy.

“The EPA has a huge opportunity to grow the economy,” says Richard Caperton, director of national policy at Opower, an energy efficiency software company based in Arlington, Virginia.

By providing households with daily reports on their energy use and what the average is for their area along with ways to reduce it, Opower will help the U.S. save as much electricity as the Hoover Dam generates this year, Caperton told IPS.

“We started out eight years ago with two people and now more than 500 work at Opower,” he said.

The “Change is in the Air” study estimates that the gradual energy efficiency roll-out would create 611,000 jobs in 2030. This number includes those directly employed in energy efficiency jobs like home contractors and construction, and people like small business owners and their employees who benefit as money saved is spent back into the local economy.

Utilities’ business model can be restructured to recover the costs of efficiency while still profiting from selling less electricity. Another recent report by ACEEE also found that energy efficiency is the lowest-cost electricity resource for utilities.

Programmes aimed at helping customers save energy cost utilities only about three cents per kilowatt hour, while generating the same amount of electricity from burning coal or natural gas can cost two to three times more.

The U.S. is not alone in failing to prioritise energy efficiency.

An 2012 international study showed that despite the potential for huge cost and emission reductions, governments put nearly all their energy research efforts into new sources of energy like new power plants rather than helping to develop energy-efficient cars, buildings and appliances.

Getting governments to fully commit to energy efficiency won’t be easy. By far the world’s biggest corporations are the fossil fuel energy and power producers, and they wield enormous political influence, said Wilson, a scientist with the International Institute for Applied Systems Analysis in Laxenburg, Austria.