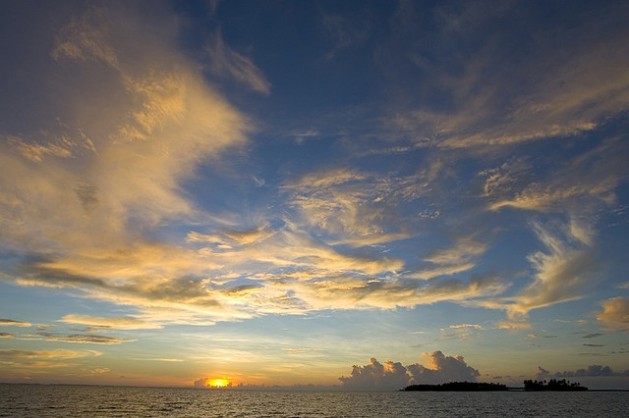 Between 1946 and 1958, the United States conducted 67 nuclear weapons tests in the Marshall Islands, triggering health and environmental problems which still plague the nation. Credit: Christopher Michel/cc by 2.0

UNITED NATIONS, May 12 2014 (IPS) - When the Foreign Minister of Marshall Islands Tony de Brum addressed a nuclear review Preparatory Committee (PrepCom) meeting at the United Nations last month, he asked whether anyone in the room had witnessed a nuclear explosion.

The question was met, not surprisingly, with resounding silence.

As a nine-year-old boy, the minister vividly remembered seeing the white flash of the Bravo detonation on Bikini atoll, six decades ago. It was 1,000 times more powerful than Hiroshima, he told PrepCom delegates, mostly proponents of nuclear disarmament.

A two-week-long meeting of the PrepCom for the upcoming 2015 review conference on the Nuclear Non-Proliferation Treaty (NPT) ended in predictable disappointment.

John Burroughs, executive director of the Lawyers Committee on Nuclear Policy and the U.N. Office of the International Association of Lawyers Against Nuclear Arms (IALANA), told IPS the PrepCom succeeded in adopting an agenda for the 2015 conference.

But “to no one’s surprise, it did not accomplish anything else,” he added.

In an open letter to U.S. President Barack Obama, a coalition of more than 100 non-governmental organisations (NGOs) and anti-nuclear activists has blasted the United States for its "dismal record" on nuclear disarmament.

"The United States has been notably missing in action at best, and dismissive or obstructive at worst," says the letter, whose signatories include the Western States Legal Foundation, the Lawyers Committee on Nuclear Policy, Peace Action, Nuclear Age Peace Foundation, American Friends Service Committee and Peace Action New York.

The letter urges the Obama administration to "shed its negative attitude and participate constructively in deliberations and negotiations regarding a creation of a multilateral process to achieve a nuclear weapons-free world. This will require reversal of the dismal U.S. record."

Unless Washington takes a more positive role in nuclear disarmament, the coalition predicts "this conflict may come to a head at the 2015 Review of the Nuclear Non-Proliferation Treaty (NPT)."

The criticisms in the letter include:

* Despite a unanimous 2010 agreement to hold a conference on a Middle East Zone Free of Nuclear and Other Weapons of Mass Destruction in 2012, the U.S. State Department suddenly announced in November 2012 the conference be postponed indefinitely.

* In March 2013 and February 2014, Norway and Mexico respectively hosted two conferences on humanitarian impacts of nuclear weapons. But Washington boycotted both meetings.

* In November 2012, the General Assembly established an open-ended working group to develop proposal for disarmament negotiations and scheduled the first ever high-level meeting on nuclear disarmament. The United States voted against both resolutions, refused to participate in the working group and declared in advance it would disregard any outcomes.

Burroughs, a member of the international legal team for Marshall Islands, said the most dramatic development of the PrepCom was the announcement of the Marshall Islands filing on Apr. 24 of lawsuits against the nine nuclear-armed states: the five permanent members (P5) of the Security Council, namely the United States, Britain, France, China and Russia, along with Israel, India, Pakistan and North Korea.

The cases, before the International Court of Justice in The Hague, claim those states have failed to meet obligations of nuclear disarmament and cessation of the nuclear arms race under the NPT and general international law, said Burroughs.

Between 1946 and 1958, the United States conducted 67 nuclear weapons tests in the Marshall Islands triggering health and environmental problems which still plague the nation with a little over 68,000 people.

The only nuclear powers which have refused to join the treaty are India, Pakistan, Israel and North Korea (which joined and later withdrew from the NPT).

South Korea’s Foreign Minister Yun Byung-Se, who chaired a meeting of the Security Council on Weapons of Mass Destruction (WMD), pointed out last week that North Korea “is the only country in the world that has conducted nuclear tests in the 21st century.

“Notwithstanding the efforts of the international community, North Korea has continued to develop its nuclear weapons over the last two decades, and is now threatening its fourth nuclear test,” he added.

If North Korea succeeds in acquiring nuclear weapons, he said, it will seriously undermine the NPT regime and exacerbate tension and instability in Northeast Asia.

Ambassador Enrique Roman-Morey of Peru, who chaired the PrepCom, admitted the meeting was unable to agree on an action plan for NPT.

“But this was due to lack of time, not lack of political will,” he said, pointing out the PrepCom does not negotiate.

Asked about the difficulties facing negotiators, he said when nuclear issues are discussed there are problems “from the first letter to the last letter” in the negotiated document.

A “working paper” resulting from the PrepCom will be the basis for future negotiations at the Review Conference.

Similarly, each non-nuclear-weapon state undertakes not to receive the transfer of nuclear weapons or manufacture or otherwise acquire them.

Burroughs told IPS the PrepCom, like previous such meetings in the years prior to review conferences, could not reach consensus on recommendations to the 2015 conference.

Many states rejected the effort of the PrepCom chair to craft a compromise document.

The NPT nuclear-weapon states effectively maintained that commitments made by the 2010 Review Conference relating to nuclear arms control and disarmament should be carried forward into the next five-year period, he added.

He said the Non-Aligned Movement (NAM) and other groupings of non-nuclear weapon states held that the 2015 conference should adopt a more far-reaching plan of action that leads to verified, timebound elimination of nuclear weapons in the foreseeable future.

Many non-nuclear weapon states also said the proposed recommendations should have taken much fuller account of the conferences on humanitarian consequences of nuclear explosions, the last two held in Norway and Mexico, as well as the first-ever High-Level Meeting on Nuclear Disarmament held in the General Assembly in September 2013.

Burroughs said the debate at the PrepCom set the stage for consideration of a crucial question going into next year’s Review Conference: “Should non-nuclear weapon states insist, even if doing so results in no agreed outcome, that the conference set in motion multilateral negotiations on achieving a world free of nuclear weapons?”

A serious effort to that end was made in the 2010 conference but was rejected by the nuclear weapon states.

Still, most of those commitments remain valid and relevant whatever the 2015 conference does.

Thomas M. Countryman, U.S. assistant secretary at the Bureau of International Security and Nonproliferation, told PrepCom delegates that in 2015, Washington will “look to build upon the success of the 2010 NPT Review Conference, where the conference approved a comprehensive, 64-item Action Plan, the first of its kind in the NPTs 44-year history.”

He said the United States will issue a national report on the steps taken so far to implement key elements of the 2010 Action Plan that uses a common framework agreed by all five nuclear weapon states.

“We will also highlight our contributions to International Atomic Energy Agency programmes harnessing the peaceful uses of nuclear energy for efforts like fighting disease, improving food security, and managing water resources,” he added.